My One-Night Stand With the News Media 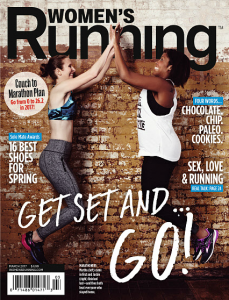 Marmots will try anything once.  So when I was invited to be on the cover of Women’s Running Magazine March 2017 issue as last year’s DC Rock ‘n’ Roll Marathon champ, I said sure.  They’d put me up for a night in Brooklyn, give me heaps of free running clothes, and an opportunity to divulge what I consider a more unconventional running story.

But I would never do it again.  There was nothing wrong with the people or procedures.  The editor of WR, Jessica Sebor, was a delight to work with, very professional, and a good writer.  And I got a boatload of expensive Lululemon clothes to bring back to my friends.  It doesn’t even bother me that I look like a fish out of water in the fancy running clothes they had me wear (under what possible weather conditions would a runner choose to go out in a sports bra-long tights combo?).  After all, I’m accustomed to looking ridiculous in photographs.

But the interview was conducted over the phone, and it’s hard to convey a good story that way, especially with someone you’ve never met before.  And I accept some of the responsibility, as I’m not so experienced at interviews and probably didn’t do the best job.

The story that was printed was not necessarily wrong, and Ms Sebor gets a lot of credit for picking up on the general story line.  She presents me as a kind of running rebel who clashed against the chokehold of authority in my youth (coaches, parents, track officials).  But then how over time I came to love running by learning how to make it my own thing, out on the trails, cleared from all the fuss of clipboards and the grind of weekly meets. 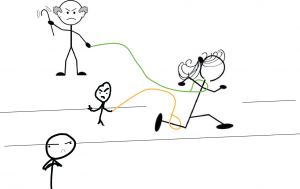 how running felt as a kid

Families insert themselves into their children’s lives to varying degrees.  The Nelsons happened to be on the high end of the insertion scale.  (Aaron termed it Full Frontal Family.)  You couldn’t entirely blame my parents for getting wrapped up in the excitement.  I was in my first year of competitive running when I won the Maryland state cross country championship.  But it took me a lot of time and free space to find a way to run happy.  Almost a decade.

For the sake of simplicity, Women’s Running adhered to a single story line: rebel teen who hates running grows into successful marathon champ by finding her true calling on the trails and escaping authority.  But what I wasn’t able to successfully convey is how I’m still rebelling.  The nature of my rebellion is different: instead of authority figures I’m rebelling against more subtle forces of marketing and culture.  To me it’s just a single continuum of rebellion.  Marmot’s instincts versus Everyone else.  As a magazine company with sponsors dependent on a large community of runners who buy stuff like watches and an audience that just wants to know what to eat, I’m not altogether surprised by the section of my story that was de-emphasized. 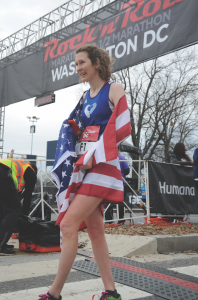 One of the subtle but critical details the story got wrong was the watch.  The story claimed I wore a watch during the marathon so that I could accurately pace Trevor to under 3 hours.  It’s true, I wore a watch that Aaron had bought for me to passively collect data.  But the idea that I checked every mile split goes against everything.  I’m sure Ms Sebor doubted that I paced Trevor perfectly to a 2:58 marathon without the assistance of a watch.  But go ahead, ask Trevor.  I’ve been hitting 2:55-2:59 consistently for eight years now.

So, what do I have against one of the most fundamental pieces of running equipment?  For me, the stopwatch is an enduring symbol of discipline and judgment.  Other adult runners probably don’t have that kind of baggage.  But as a kid the watch was my enemy.  My father would get exasperated over my inability to run even mile splits.

Aaron, with the best of intentions, got me a running watch a couple years ago.  I wore it just long enough to learn that I train slower and shorter than all my peers.  And that my regular running routes are consistently a third shorter than I thought they were.  Six months ago I mounted a rebellion that resulted in the removal of all my running data by deleting my Strava account.  I haven’t worn a watch since.

You want my entire list of other little running rebellions?  Here’s a start:

(a) Bun-huggers.  I got to wear shorts in high school, but bun-huggers were the norm in college.  They gave me wedgies.  Boys got to wear normal shorts.  So I thought it was very reasonable when I marched into Coach Ned’s office offering a compromise: I’d wear the ‘thunder-wear’ when I was racing as part of a relay team and needed to match.  But when I was racing in an individual like the 1500m, I wanted to wear shorts.  Ned’s response: ‘I don’t think girls look good in shorts.’  I slept on it a couple nights.  Then I quit the team and never ran collegiately again.

(b) Diets.  For as long as I can remember, runners have obsessed over what they eat.  One of the things I’ve loved about running since day one was the total license to eat liberally.  Anything but mayonnaise.  China is one of the few places where my willingness to eat everything gets tested (duck head, anyone?).  Otherwise, I’ll eat anything, from beef heart to sea urchin to brussel sprouts.  As a kid, I was put in the ‘failure to thrive’ category for being too underweight and put on a daily milkshake diet.  After running it by the Andrish family doctors last week, I’ve decided to revive my daily milkshake diet.

(c) Olympic Trials.  Ever since breaking the 3 hour marathon and the 1:20 half, folks have asked if I’m going to try to get an OT qualifier.  When I questioned what the point was, Aaron’s mom suggested, ‘Ooh, it would be great for cocktail parties!’  Right, all those cocktail parties…..  I know lots of runners thrive on setting and achieving goals.  But I’ve been lacing up for 20+ years for no particular reason.  Other than make friends and find birds.  Back in the day I had explicit goals: qualify for Nationals in the 1500m, finish All-America in cross country, run a marathon under 3 hours.  Accomplishing them was satisfying.  But these days, when Ms Sebor asked me what my goals were in 2017 for the WR article, I had to make something up about wanting to break 1 hr at Cherry Blossom and run a 100k.  I never even signed up for a 100k…..Winner!

(d) 100s.  Ultra runners fancy themselves as hippie-rebel types.  But let me tell it straight.  There’s as much group-think in VHTRC as any other running group.  Don’t get me wrong, I love VHTRC.  They have great snacks.  And awfully nice people.  But I recognize that I’m considered less of a runner for not doing 100 milers.  That no one gets awards for the Women’s Half.  I’m utterly uninterested in trying to prove my toughness.  Or ability to withstand the elements (Hellgate, cough cough).  But I loved Manitou’s Revenge, the gnarly 54-miler that took Brian Rusiecki longer than Hellgate.  I can handle stunningly beautiful.  Or fast and adrenaline-pumping.  I cannot handle JFK.  Or really Bull Run.  Yeah, come on, there’s like one section of pretty bluebells.  Yeah, sure being on a team is a lot of fun.  Until you start puking your guts out.

(e) Sponsorships.  When I was 15 years old, my father brought me into the Racquet and Jog shop in Bethesda, and tried to convince the kid at the cash register that they should give me a free pair of shoes because I had just won the Maryland State Championship in cross country.  The kid at the cash register mumbled something about the store not doing that sort of thing.  My dad pressed his arguments, and my cheeks flushed as I murmured  something about NCAA violations.  When my father finished purchasing his tennis strings and we left the store, I was still red with humiliation and he was still arguing his point.  Many years later, I still eschew opportunities to race of the teams of local running shoe stores (PRR, Pacers, GRC, etc.).

(f) Vibrams.  I have a personal vendetta against Vibrams because they knocked out my favorite massage guy.  He couldn’t keep up with the flood of business he got from all the broken runners at the height of Vibrams popularity.  He ended up with tendinitis in his hands and closed his practice.  I still miss Tom the Torturer.

(g) Meditation, Mindfulness, Yoga.  These all kind of get clustered together.  Just, no.

Is there a side of me that is conflicted?  Don’t think I don’t get reminded all the time how much I leave on the table.  But we all make our own deals with the devil.  Nothing comes free.  It’s easy to over-glamorize high achievement (winning big races, qualifying for Olympic trials, etc.).  [That was kind of the point of my misinterpreted Horrible Prizes blog.]  But running different from other sports.  It has a dark underbelly.  Self-destruction and obsession creep up on you unwittingly.  Everyone has to decide for themselves how deeply they’ll wade into those waters, how much they’ll put their fragile bodies through.  But whatever you choose, just make your decisions autonomously.

My motto has always been: Run Another Day.  Pretty unsexy.  But for me, it’s about lacing up another day.  Too many of the talented runners I knew from high school and college don’t run at all anymore.  It’s probably puzzling to them that I, the one who most openly rebelled against it, am still out here.  But I had to reinvent myself several times over as a runner.  Walk that tightrope between competitiveness and self-destruction.  Avoid the traps of expectations.  I should keep a list of all the ‘You shoulds…’ or ‘Why don’t yous…..’  The phrase Fuck that! is highly underrated.  These days, it’s so easy to get caught up in what everyone else is doing and lose your own voice in that clamorous background noise of social media.  Fortunately, that’s what the woods are for.  [Hmm, after I wrote that sentence I realized that the woods are no longer an escape from social media.  Fuck that!]

4 Responses to My One-Night Stand With the News Media