Dam Half Take Me Out to the Ballgame

In Memory of Timothy P. Susco 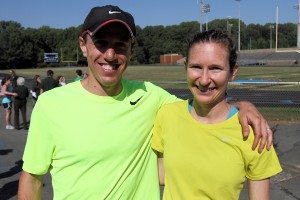 Alan and I can both be easily identified by NASA satellites

With 9 minutes until gun time, I whispered in Aaron’s ear, ‘Do you think I can go pee in those bushes over there?’  After two straight weeks of trail racing, where the world is my bathroom, I wasn’t so sure what the rules were for a neighborhood road race.  But Cameraman Aaron, his hat on backwards, his lenses bulging in his cargo pants pockets (at least I think that was a lens…..), and his camera slung around his neck, made no effort to dissuade my pursuit of bladder relief.  Smart man.  My bladder was suffering on two fronts: for one, my period had exploded that morning and whatever fireworks were going on in there were pushing the bladder into several organs with which the bladder is not usually acquainted; secondly, in order to keep the uterine explosions from doubling me over in pain, I’d resorted to my 800mg ibuprofen prescription horse pill, and to make sure my kidneys wouldn’t be negatively affected by the racing/drugging combo, I’d gulped down loads of water.

So, in my perfect bladder storm, I dashed off to some bushes off a bike path some 40 meters away.  As I was coming out of the bushes I was startled to see another guy coming down the bike path.  ‘Is this where we go?’ he asked.  He looked strangely familiar, but I didn’t realize it was Alan Webb until he was announced a few minutes later at the race start.  ‘Yup,’ I chirped.  And that was the beginning of a long beautiful friendship…..Just kidding.  Aaron did completely mortify me by making me take my picture with Alan after the race.  He KNOWS I don’t do those things.  Alan was very nice about it, if not a little goofy about joking about how he wears a bright yellow shirt so that NASA can track him from outer space.

But anyway, back to the race.  I was running this particular 8k because Aaron had agreed to take pictures for his friend Lindsay who was the race director (props to Lindsay, the race was a stunning demonstration that Reston, Virginia can throw down a road race).  This race has been run for five or so years now as a fundraiser for brain aneurysm research in honor of Tim Susco, a student at Reston’s South Lakes High School who died tragically of a brain aneurysm (hence the South Lakes connection with Alan Webb).  After two weeks of long, tough racing at the Women’s Half Marathon and the Dam Half, I was looking forward to a low-key small-time road race that would be short, flat, and simple, with no Stairways to Heaven, no need to find course for yourself, and ideally, no competition.  I mean, who goes to Reston?? 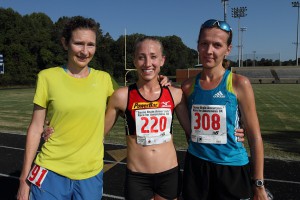 I don’t look like I think I belong in this picture.  Winner Kristin Anderson (center), and Elena Orlova (right)

But Alan Webb wasn’t the only speedster there.  Alan ran away with the men’s field in 24:19, finishing 2 minutes ahead of the second place Ethiopean-looking guy.  But the competition for the top female spots was fierce, and the top 3 women edged out everyone in the field except the top 3 men.  A girl named Kristin Anderson who was outfitted and behaved like a college runner (ie, itty bitty clothes, lots of pre-race jumping and flexing) won the women’s race in 29:06.  She described herself as a track runner who was taking a break and doing some road races for fun.  Elena Orlova was second in 29:34, and I finished 7 seconds back in 29:41.  With third in the bag and second out of reach, my objective of the last mile became to pass the Fexy guy, who finished 4th male behind me in 29:53.  Yikes, I put 12 second on him in the final mile.  I could tell that of all the nice groups at the race (there were many charity organized teams), the Fexy people were particularly annoying, and I was glad to hear Aaron confirm my gut instinct that the Fexy (a play on Iron (Fe) Man (XY)) were notoriously evil even among triathletes.  Check out team Fexy’s website to become acquainted with the anti-WUS. 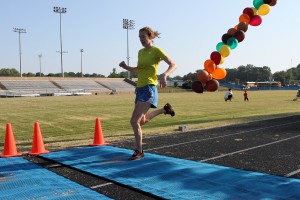 For whatever reasons — two previous weekends of tough trail racing, the travails of my monthly visitor — my legs felt dead heavy and the race was a bit of a slog for me.  But it was good to be able to break 6-minute pace on an off day.  My legs are tired and ready for a taper leading up to Baltimore Marathon on October 13th.  This is the first time I’ve trained for a marathon with someone who knows his stuff (ie, Aaron) actually witnessing how I train.  And I really had no idea I was such an unorthodox trainer (or non-trainer) until I had Aaron serving as a mirror.  I feel like I’ve trained a lot, but I realize now my ~50 miles or so a week is still just a fraction of what top runners do.  [Note Aaron and I have run our long runs together, plus Aaron has done some extras.  Aaron’s response: This is the WORST I’ve ever trained for a marathon.  My response: Golly, this is the BEST I’ve ever trained for a marathon.]