Eric ‘Ned’ Nedeau missed going to the Olympics by a crushing tenth of a second.  At the 1996 US Olympic trials for the 1500m, he finished 4th in 3:44.11.  The 3rd and final Olympic slot went to Jason Pyrah, who edged him in 3:44.03.  In 1997 Ned accepted the head coaching job at Amherst College for the men’s and women’s track and cross country teams.

Ned (in front in black)

According to Mark Lech, Erik Nedeau “was one of the fiercest competitors I have ever seen, certainly that I have ever had the privilege to coach. His greatest asset was his tenacity. He got every single ounce of performance out of himself. When he lost a race you knew it was just because the person who beat him was more gifted, but that he certainly was not out-finessed. He was able to get more out of himself than almost all of his contemporaries. This is not to say he was not talented; certainly he is one of the most talented athletes to come out of the State of Maine – his records speak for themselves. As a person, there is none better. He is a stand-up guy and I will forever be grateful that I had the chance to work with him and call him my friend.”

There is a great advantage to having such an accomplished athlete as your coach.  Ned was exceptionally knowledgable about how to train a body.  He had long-term vision about how to build base, hone speed, and hit your peak at just the right time.  He had ample personal experience in how to thread that micro-thin line between hard training and body breakdown.

Just three weeks after joining the team, I was breezing through workouts and Ned started inserting our young assistant coaches into my intervals to push me.  Ned asked, ‘The qualifying time for Nationals for the 1500m is 4:44.  Think you can do it?’  I didn’t hesitate.  ‘Definitely.’

Running was an all-consuming enterprise for Ned.  Maybe he had some secret pastimes beyond running.  Maybe he lapped up German philosophy in the evenings and drove to Boston for esoteric French film screenings.  But to our knowledge Ned’s life revolved around three activities: running, coaching, and thinking about running and coaching.

I had left Stanford and come to Amherst for the explicit purpose of having a liberal arts education and a balanced student-athlete life.  Stanford was the kind of place where you had to be subsumed by a single passion.  At Amherst, students weren’t penalized for pursuing multiple interests simultaneously.  It was like summer camp.  I spent mornings throwing ceramics on the wheel at U-Mass.  In the afternoons I studied molecular and evolutionary biology, Russian literature and language, art history, religion, and creative writing.  Twice a week we had formal team workouts at 4pm, but otherwise I squeezed in a trot when I could.  Some evenings I rode horses over fences with the Amherst equestrian team.  On weekends I had athletic events (track/cross country meets, soccer games, or equestrian competitions).  My ceramics professor gave me a key to the studio so I could go in on weekends and use the wheel on my own.  I loved going into the studio on a Sunday when it was just me and the purr of the wheel and the radio.

Ned and I remained on very good terms for most of my first season of indoor track.  I fulfilled my vow to qualify for the NCAA National Indoor Track & Field event in the 1500m, shedding 20 seconds off my time as the season progressed.  When a chick from Springfield spiked me from behind during a 1500m race and sent me flying into the infield, it didn’t escape Ned’s notice that I popped my bloody knees right back up and whirled around the track, passing runner after runner until I finally beat the girl that tripped me.  Perhaps I had the talent and the fire.

When I felt like running, I had more fire than anyone else.  In order for our cross country team to qualify for Nationals, we needed a top finish at Regionals.  As we sat on the bus the morning of the Regional meet,  I looked out at a field filled with women trotting around in different colored track suits warming up, face paint on their cheeks, ribbons in their hair.  I growled out loud, We’re gonna end all those girls’ seasons today.  That kind of statement wouldn’t bat an eyelash on the soccer field, where taunting and scraping each other up came with the territory.  But it wasn’t part of the running culture.  Everyone’s jaws dropped.  Ned’s eyes lit up, and he declared, That, that is the quote of the day!  I PRed by 30 seconds to help our team qualify for Nationals.  At Nationals I ran so hard I thought I’d made a terrible mistake and was going to blow up after just one mile, but held on and ended up slicing another 30 seconds off my PR to finish All-America.

But when I didn’t want to run, I was the immovable object to Ned’s unstoppable force.  Maybe my hamstring was bothering me.  Maybe I had my period.  Or maybe my legs were just sluggish and hadn’t recovered from the last workout, and it didn’t seem like a workout would accomplish anything other than setting my recovery back further.

It all came to a head on Saturday, September 15th, 2001.  It was a beautiful sunny day at Williams College.  It was my second collegiate cross country meet.  And I didn’t want to run.  There was nothing physically wrong with me.  No injuries.  No bugs.  But I hadn’t been able to run since Tuesday’s 9/11 attack.  I’d skipped the Thursday workout.  I’d barely trudged to class.  Tuesday night after the attack I’d slept for 20 hours.

Ned was baffled.  No, I hadn’t lost any friends or family in the bombing.  No, I hadn’t seen a counselor.  Yes, I understood that every other Amherst runner was lacing up and competing that day.  I couldn’t describe what I had.  Malaise?

I agreed to toe the line.  The gun went off and I followed the surge.  But I was in a haze.  I just kept slipping back, getting passed on all sides.  The world was at war, a nasty surreptitious war with invisible enemies and civilian targets, unlike anything ever fought before.  And somehow I was supposed to care about who ran faster from one point to another in Western Massachusetts.  I started walking.  And then I zombie-walked off the course and stopped.

When the race was over, Ned did not disguise his disappointment.  I typically recall these kind of memorable conversations word for word.  This one’s a blur.  Just a lot of Ned’s finger pointing at me and my teammates.  The ones who had all toughened up and raced today.  The NCAA had cancel events during the week, but decided to hold Saturday’s meets.  It was clearly time for everyone to move on.  And there I was, reduced to muffling snot-faced sobbing.  Totally at a loss of words.  I didn’t know if I was crying because (a) Ned’s words had sunk in, and I actually felt guilty about dropping from the race, (b) because I could no longer pretend my coach wasn’t a total a-wipe, as I’d long suspected, or (c) it was still sinking in that I now lived in a world populated by crazy jihadist terrorists who might blow up people I loved at any moment.

When a cat pees on your furniture, it’s almost impossible to get the smell out, even with powerful chemicals.  When Ned and I lost respect for each other that day, every tiny skirmish from that day forth was magnified.  Ned thought I was a princess.  I thought he was a Neanderthal.  It became personal, and a power struggle.  Ned won most of the power struggles (No, you have to wear the bunhuggers.  Yes, even for individual track events.  Why?  Because girls don’t look good in shorts.)  But in our power struggle there were really no winners, just two big losers as a pair who should have made an invincible team came to detest each other.

Ned and I were on moderately good terms after xc Nationals.  I think Ned recognized that I’d made a powerful push to return to form following my month-long suspension, and ran the race of my life at Nationals.  Then one day I told him about my plans to study abroad the next semester in Melbourne, Australia.  I’d be going with Katelyn, my lab partner and friend from the soccer team.  As experimental biologists, Katelyn and I had discovered that if we chased our vodka shots with a squirt from a bottle of Hersheys chocolate syrup it made getting drunk a lot more fun. 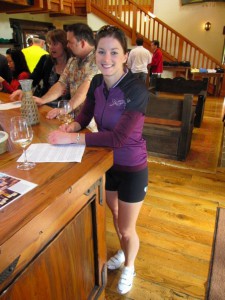 if it hadn’t been for Katelyn, i’d never have run a marathon or gotten a phd in biology

After Nationals, Ned had taken my All-America award to have a professional calligrapher inscribe my name.  A couple weeks later I stepped into his office and asked if the document was ready.  He opened his palms and said he didn’t know where it was.  Maybe it had been misplaced.  He didn’t try to look for it.  It was only then that I realized how wounded and fuming he was over my decision to study abroad.  There was a weird phenomenon: whenever Ned and I locked heads, his facial features would start to distort in cartoonish ways.  The gap between his teeth would enlarge.  His forehead extended.  His eyes got beadier.  I always left Ned’s office feeling much worse than when I arrived.

I never got my All-America award.  I ventured into Ned’s office a few more times to ask for it, but always got the same response.  You could cut through the tension in the air with a butter knife.

Sometimes I fantasize about driving up to Amherst, cat-burglaring into Ned’s office (in a skin-tight black cat suit with slicked hair, of course), rifling through all the file drawers until I find my award, and stealing it back.  I know it’s something that I’d just store at the bottom of some drawer with other old documents.  But it’s the principle.  I know was an obstinate little athlete.  That I never lived up to my potential, or the dreams of my coaches — and my father before them.  And I know I’m a big whiner.  Aaron recently titled one of his Strava runs: Tenleytown / Georgetown in which the Marmot comes along for half the run, and she demonstrates her ability to whine even at a brisk pace.  But honestly, I wish other people would whine more.  Like for all those years when Aaron silently suffered through Lyme, with me naively clippetty-clopping along utterly unaware how uncomfortable he was.

I know Ned doesn’t think I deserved my All-America award.  That I didn’t put in the work.  That I never lived up that ascetic ideal that runners should surrender themselves to the sport, powering through pain and injury and hardship like an inspirational Nike ad.  As time has passed, I’ve tried to see Ned’s perspective.  To spend all your time devising meticulous training plans, with a specific purpose to each workout and training run.  And have me foil them, over and over.  In truth, Ned’s fury actually was his way of caring about me.  For most of the runners, he would’ve shrugged if they’d scooted off to Melbourne for a semester or dropped out of a race.  He desperately wanted me to run the way he did, like my soles were on fire and nothing would stand between me and my goals. For someone who came so tantalizingly close to his Olympic dreams, maybe he couldn’t help himself.