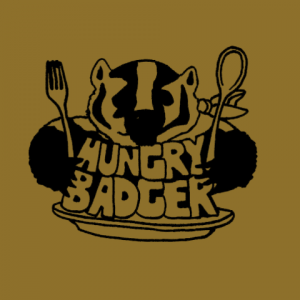 The first sign that I’m starving is sweat.  It’s 2am and a thin layer of moisture has pooled across my chest.  It will leave funny little bumps in the morning.  Through my slumber I can feel droplets tickle my chest as they funnel their way towards my belly button.  I’ve been dreaming about food for some time now.  Vine-ripened tomatoes and mozzarella.  A filet I can cut with a butter knife.  I’m overheating and have kicked off blankets.  It’s called my ‘reaction’.

I imagine that if I just squeeze my eyes tight I’ll fall back to sleep, dreaming of tomatoes again.  I’m so dog tired.

But I know that in the Battle of Tired v. Hungry, Hungry almost always wins.  Hungry is the Duke Blue Devils of my nights: the little fuckers that always win.

Hungry is a little green leprechaun dancing on my chest, singing Time to Get Up.  Time for Snausages!

I try to convince the leprechaun that 2am is actually not a great time for snausages.

But I know the drill.  It’s been particularly bad lately, but the Reactions have been going on for years.  My body is churning, and the longer I lie in bed, the angrier it will get.  My legs are already starting the throb.

I’m not used to having to navigate stairs to get to the kitchen.  We didn’t have stairs at Macomb Street.  I have to grip the bannister with one hand and steady myself against the wall with the other.  My tight Achilles are not ready for stairs yet, and I have to rely on my upper body to descend without putting weight on my feet.

Okay, little fucker stomach, what do you want to eat….?  The yellow light from the fridge is blinding, and I squint to see its contents.  How ’bout some fuckin’ Cheerios?  Cursing makes me feel better.  It deflects blame.

Oh, don’t worry, the blame will come later.  Why didn’t I shove more food down my throat before going to bed?  As if a tall glass of whole milk and a couple handfuls of almonds was possibly enough snack to get through the night.  I should have had Cheerios…and a snausage…and a yogurt….and my monkey chips. And prophylactic Z-quil.

But at this very moment I’m still too tired to start going down the blame game.  I barely have the energy to pour a bowl of cereal.  I’m too tired to sit up on the couch, so I slouch at an angle somewhere between prone and seated, like a rag doll, and dole spoonfuls of milky oats.  My esophagus would rather I sit up like a big girl.  It hurts to swallow food at this angle.  But I’m too tired to care.

The second stage of starvation is called Wishful Thinking.  It’s the part where I think, Okay, the Beast is Fed!  Back to Bed!  As I crawl back up the steps and under the warm covers, my belly purrs with contentment over the crunchy oats and creamy milk.

It lasts for about five minutes.  Starvation is different from hunger.  Hunger can be satisfied.  Starvation is in your bones.  The cereal bowl was enough to get me to stop sweating.  But it feels like a very hungry badger has taken residence inside my gut and is ransacking my organs in search of some tasty bites.

I look at the clock.  It’s now 3am, too late to take any sleeping pills.  It’s going to be a very long night for me and the Badger.

Wait a minute.  It did not take you an hour to roll down the stairs and nosh on some cereal.

Oh, but it did.  It would only take 10 minutes max in day time.  But when you’re sleepwalking the simplest tasks get drawn out by an multitude of at least four.  My Cheerios get so soggy, no one who wasn’t starving would eat them.

The Wishful Thinking stage eventually gives way to the third stage called I Would Like To Die Now.  This is the stage where you are so hungry and tired that tears start to stream down your cheeks.  Your body seems to have come full circle in its secretions, from sweat to tears.  As if I could somehow push this rabid badger out of my kitchen with a waterfall of fluids.

Eventually I don’t feel tired anymore, and I just feel hunger, boredom, and throbbing.  I can still tell I’m tired because my thoughts get all mangled.  The story lines I make up in my head start to fray and not make sense.  The delirium is the closest I get to knowing what it feels like to be mad.

One benefit of not feeling tired is it’s way easier to make trips to the kitchen now.  I feast.

I lay some towels down in the bathroom floor and lie there, giggling at the recollection of how much Aaron hates my stinky snausages.  One time the odor was so overpowering that it woke him up.  This time I close the door to contain the fumes.

The knowledge that the throbbing in my legs is going to make for a pretty painful WUS the next day is the opposite of soothing.

But dawn light is coming in.  Just making it through another night feels like a victory.  Tomorrow before bed I’ll try to shove down more food and pills.

There is a long term plan.  I’ve enlisted in the Baltimore Aging Study, and next month I’ll go to Hopkins for some serious diagnostics.  My physicals never detect anything abnormal — fine thyroid, hormones, glucose, iron, etc.  But there is something queer about my physiology, and maybe three consecutive rigorous days of testing will uncover it.