Another view from the (holiday) lake… March Mileage Madness

When Brian checked his watch at the Mile 7 mark I nearly smacked him.

‘Brian!  You KNOW you’re not supposed to do that!’

Brian seemed perplexed.  Wasn’t the entire point of his dragging himself out of bed to be my pacer that morning so that he could, well, give me some indication of my pace?  How exactly would one do that without glancing at a watch?

‘No, no,’ realizing that explanation was in order.  ‘You’re not a pacer, you’re a companion.  Just do your Brian thing and tell jokes and make the miles go by faster.’

Fortunately Mr. University-of-Michigan-doctorate-bound Greeley was a quick study, and instantly transitioned into his newly configured role, relieved of any duties or responsibilities except to Simply Be Brian and make the miles tick by in the middle part of the course.

‘You gotta go get Sam!  I saw him right up ahead,’ Brian enthused.

I rolled my eyes.  Sam was one of those youngster pace-pushers,  leaving the group a mere 10 meters into the Tuesday night run, forcing us to yell from behind, ‘Sam, go LEFT.  Sam, go RIGHT!’  Also, I missed the start of the race again.  By six minutes.  I left my house at 6:30am, more than enough time to get to the 8am start.  But the metro was a nightmare, so many runners cramming into over-stuffed trains.  The train ahead of us was so over-filled that they broke the doors and had to detrain, leaving my train stuck in a tunnel for 20 minutes and then cramming all the detrained runners into my train.  Just getting out of the Stadium-Armory metro took 20 minutes.  Fortunately I had my VIP access to the elite port-a-potties or I would have been 20 minutes late to the race.  I told Aaron that I was not going to piss myself again this year.  But starting in the back in the thick of the pack was impossible – I kept getting squeezed and blocked in, taking some elbows to the chest.  I didn’t want to be one of those asshole runners but the runners were spread thick across – there was no outside alley.

So I had been seriously cranky the first ~5 or so miles of the race.  My legs felt stiff, I was glum about being so far behind the competition, Brian would probably be waiting forever for me at Dupont.  Last year I had felt to brisk in the opening miles of the race; this year I just felt mopey.

But seeing my Mom at Dupont picked my head up out of the gutter.  And then having Brian jump provided a much-needed rush.  How cute!  He was wearing his WUS shirt too – we MATCHED!

‘WOOOOOS!’  a spectator yelled from the side of Columbia Road, reading Brian and my matching WUS shirts.  I loved it.

Suddenly I was all chirpy again.  This was fun.  I was finally hitting a stride.  We gave big waves to JLD 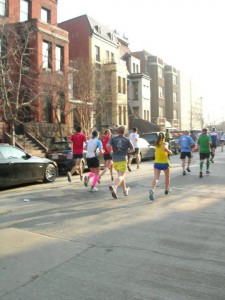 turning to wave to JLD in Adam's Morgan

and Anna through Adam’s Morgan, passed by Robin and Keith who were also running the half and the full, respectively.  WUSsies all around!  Seriously, I hadn’t planned on running the half until I realized how many WUSsies were doing it – Doug, Kerry, Keith, Neal – and jumped on the bandwagon.  We were all supposed to meet at Doug’s friend’s sister’s restaurant in Dupont, Bread & Brew, for a post-race meal.

Having completed his mission of pulling my head of out of the mopey gutter and getting me back in a groove, Brian parted ways at the bottom of North Capitol street so he could get to his shift at PR running store in Cleveland Park.  My favorite part of the whole race was getting to run with Brian and seeing all the WUSsies in that Adams Morgan/Shaw/North Capitol section.  I can’t believe Brian is leaving so soon for Michigan, we WUSsies will miss him dearly.

But when I turned the corner I saw one more piece of unfinished WUSsie business.  Just ahead was Mr. Sam, his long hair and Vibrams unmistakable.  I cozied up to him with about a mile and a half to go.

‘How about we finish together, Sam?”  I suggested.

‘Okay, but I’m not registered so I’ll peel off.’

We ran a couple paces together before I saw the back of Sam’s shoulder as he pushed up the short hill.  I lagged behind, regaining my stride at the top of the hill to catch up.  We ran a couple more strides together when he conceded, ‘It’s okay, you go ahead.’

As it appeared that Mr-push-the-pace-every-Tuesday couldn’t hang, I pressed on to the finish with a freshness I haven’t had in a while.  Whereas last year I was struggling at the end, this year I passed ~15 in the final mile. After a tough start, I finished in 1:23 for 6th overall female and 1st in my new 30-34 age group.

And in true WUS spirit, Neal, Aaron, Neal’s sister and brother-in-law, and I celebrated with post-race grub at CPBG.  Since it was St Paddy’s Day and crazy with drunken green people some enormous bouncer tried to card me, but I didn’t have my ID and one of the regular waitresses recognized and vouched for me.  Good Ole CPBG. 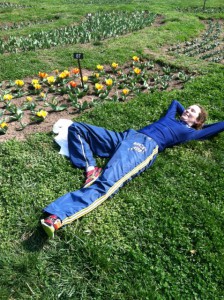 good spot for a post-race snooze

After the race Aaron, my mom, and I strolled around the cherry blossoms by the tidal basin.  I found a sunny resting spot by the tulip garden. 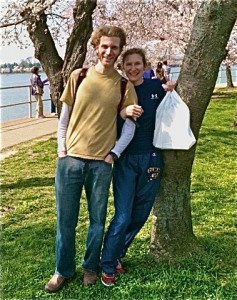 mom was right -- I should've dropped the race bag

Post-script: Sean and I talked about him pacing me at Promise Land in April.  If we go ahead with this plan, there will have to be some explicit rules about pacing that Seanie can either agree to or I’ll send him ahead to run with Keith.

10. The pacer must allow the runner to smack him in the face if he violates #1-9.