Pussies Fly Together A Recovery (by Aaron) 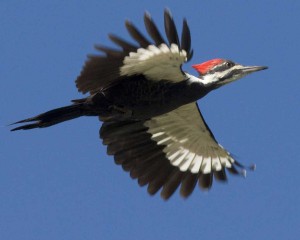 the nearly 30-inch wingspan of the Pileated woodpecker

When Aaron and I started running together, it became clear that we would never get anywhere if I kept stopping every few minutes to look at birds.  But it seemed implausible that we would spend all those hundred of hours running in the woods and never stop to appreciate the beautiful and varied avian fauna that could be found even in the heart of the city.  So I proposed a compromise: we would only stop for woodpeckers.

Woodpeckers have several advantages as a family (Picidae) to key in on.  Most importantly, the distinct thump of the woodpecker beak on rotting wood is easy to hear, even over the sounds of running and conversation, so we wouldn’t have to rely on sight for identification (much better to keep those eyes pealed on the roots and rocks one is apt to trip on).  Woodpeckers also have very distinctive calls (the Woody Woodpecker imitation is not as absurd as one might think).  Secondly, the medium-level abundance of woodpeckers in Rock Creek Park and Glover Park falls perfectly at the sweet spot of the spectrum.  In our woods we could reasonably expect to spot at least one woodpecker per 1-hour run, on average, not so many that we would be continually bombarded with stoppage (the original problem), but not so few that we would often come home empty-handed. 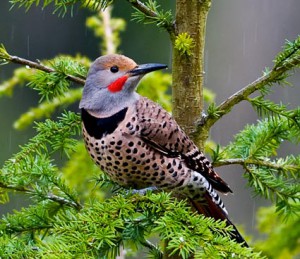 The harlequin Flicker is actually quite common in our woods

The third advantage of woodpeckers is that they are relatively large, charismatic birds with striking bold patterns (e.g., distinct crests, black-and-white striking, large beaks, bright red patches, unique vocals), which would make them not only exciting to see, but plausible for Aaron to learn to distinguish.  The fourth major advantage of woodpeckers is that there are five main species of woodpecker found in our woods, enough to have a good diversity and range of shapes and sizes, but a relatively small number for poor Aaron to learn to identify: Pileated woodpecker, Red-bellied woodpecker, Flicker, Hairy woodpecker, and Downy woodpecker (Yellow-bellied sapsuckers and the majestic Red-headed woodpecker also can be found but are not so common). 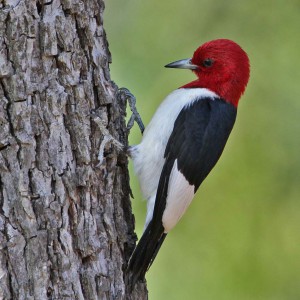 Sean and I almost strangled each other on an Eagle Run when Sean was convinced that a stunning Red-headed woodpecker was the more common Pileated woodpecker. The bickering only stopped when I could Google-prove it on my cell phone.

And the final reason to stop for woodpeckers: they EAT BY BASHING THEIR FACES INTO TREES — how can you not stop to witness that.  So, if you want to start to appreciate the feathered friends that serenade your runs, I suggest the woodpecker, for the reasons above, as a good place to start.

Aaron has now become a full-fledged Pecker Master.  At this time he can even distinguish the Hairy woodpecker from its nearly identical but slightly more petite Downy woodpecker cousin.  Find the Pecker is now our favorite running game.  He’s even ventured into learning other unusual bird species like the Rufous-sided towhee.  I think Aaron’s true crowning as Pecker Master happened when he identified one while we were biking.  Granted, I am not a fast biker (this was the first time I’d ridden a bike on a road since college).  But still, that’s some skill there. 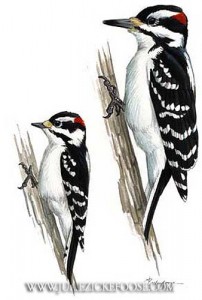 Aaron’s response to the anatomical differences between the Downy woodpecker (left) and the slightly larger Hairy woodpecker (right): pshaw!