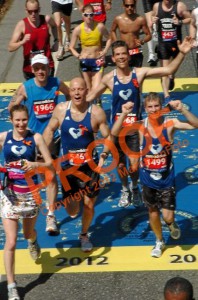 In the months leading up to Boston, it became clear that Aaron and I had divergent visions of what ‘running the Boston Marathon’ meant, mine involving a complex web of social engagements and traditions, Aaron’s involving the most minimalist path to Hopkinton and back.  Aaron’s way was to fly in the night before, plop all his belongings in his drop bag, trot through Framingham, Wellesley, and Brookline, grab his stuff from the bus in Copley Square, dash through the secret shower, and hop on a plane back to Reston.  If Aaron had a kitty, he’d be back before it even woke from its long kitty nap. 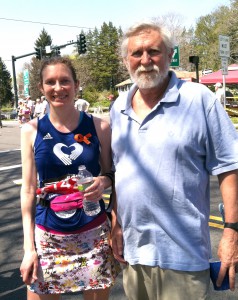 taking a break with the parents atop Heartbreak Hill

But for me Boston is a major social event, the planning for which begins some time in, say, January.  I run as part of the Center Volunteers in Medicine (CVIM) charity team based in State College, PA (although great lengths are gone to in order to ensure that we are never mistaken for the kind of charity runners that don’t have to run a Boston qualifying time).  CVIM provides medical services for employed adults in State College who lack health insurance via doctors that volunteer a couple hours every month.  I run for CVIM every year, I love supporting the team, but I am an absolutely horrific fundraiser (Me: ‘CVIM is such a great cause.’ Friend/family member: ‘So do you want me to contribute money?’  Me: ‘Oh, no, I think you donated a couple years ago, you don’t have to donate every year.  I’m not even running hard this year.’)

The actual race is probably the least important part of the Boston Marathon experience for me.  It’s about the road trip with the State Collegians, popping into Dunmore for pizza and more of the Cali clan, about seeing Boston friends like Peter Bacon and Sarah Schwertner, about seeing my Grandma, who used to watch her uncle Lauri run the Boston Marathon as a girl in the 1920s and 1930s and hand him oranges, just like the kids still do today.  (Lauri was apparently a perfectly fine name for a Finnish man in the 1920s).  It’s about the post-race party.  It’s about all the adventures and mishaps that inevitably arise when a large group of 20+ runners and their family are herded through the long, complex itinerary of events that have been planned for the weekend, the least of which is the actual race starting from Hopkinton.  The wrench in the tire.  The Newton-Wellesley Hospital and the Housewives of Orange Country.  Anything that involves Peter Bacon. 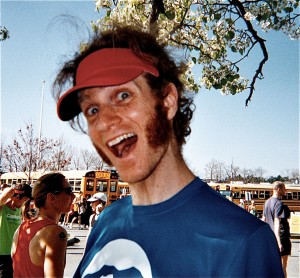 Aaron, waiting under the tree for others to drop their bags, fakes being happy about deviating from his minimalist modus for the sake of group cohesion

But relationships are all about compromise, right?  [Back in June I was running with Sean and he asked me whether Aaron really knew me yet – it was early in the relationship and he wanted to make sure Mr Schwartzbard had an inkling of what he was getting into.  I told him that Aaron described our relationship as like a United Nations meeting where I got the votes of the US, China, Russia, France, and Germany and he got the vote of Ghana.  Sean quickly grasped that his concerns were unfounded.]

Taking Ghana’s soft voice into consideration, the Marthon Security Council ruled that the compromise would work as follows: we would fly up Sunday afternoon and fly back Monday after the race, in complete adherence with the Schwartzbard Boston tradition.  But crammed into those 30 hours I would be allowed as much social activity as I could squeeze in and possibly still run a marathon.

So after grabbing our race bibs at the expo (and some snazzy new headgear), we had our first social engagement: a wine and cheese with the Weingers, family friends who have a lovely house in Newton and graciously hosted Aaron and me and my parents, who had driven in from Vermont after visiting my brother and his two baby girls, Summer and Savannah.  Ron Weinger went to Brandeis with my father, where my non-Jewish father achieved his premier athletic accomplishment as an intramural football champion.  However, I think it’s more remarkable that my father was immersed in Jewish humor for four years at a Jewish university and still can’t understand what Seinfeld is about.

The next social engagement was dinner at Appetito in Newton with the Weingers, my parents, and the State College gang.  Of course Tom’s group was 45 minutes late, but at least it was for a good cause this time, buying orange ribbon for us to pin on our singlets on race day.  The ribbons were to commemorate the fifth anniversary of the Virginia Tech shooting.  Five years ago, our CVIM teammate Jen Herbstritt spoke to her brother Jeremy on the phone before the race so he could wish her luck; by the time she finished he had been shot and killed in the Virginia Tech classroom.  I get goose bumps just writing that sentence. 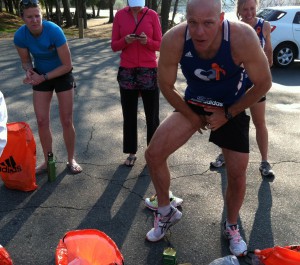 Haley learns from the master about lube administration

We reconvened with the State College crew Monday morning at Hopkinton State Park, where John Domico demonstrated comprehensive lube application so that we could all leave massive greasy butt marks on the seats of the cheese bus that took us to the Athlete’s Village at Hopkinton.  It was a three-ring circus keeping our unwieldy large group together.  We waited for 20 minutes by the port-o-potties because we thought that Mike Weyendt was having trouble dropping his Hershey kisses (Mike had long ago finished his business and gone off to drop his stuff while we kept the port-o-potties company). 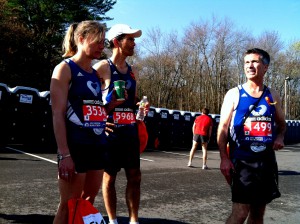 Meira: Can we go now? Tom: No, I think Mike is still pushing

I dropped back to Corral 6 to run with John Domico and Jim Moore.  I was absolutely determined to run easy and have fun and not destroy my legs before the Promise Land 50k two weeks later.   I even wore my ‘fun skirt’ to remind myself of my mission should my legs start getting too forward, and carried a disposable camera to keep myself entertained.  I was actually glad that it was near record-high temperatures because that was even more reason to take it slow and easy.  And the heat actually made it more fun, getting splashed with sprinklers and hoses by kids along the way.  The fans seemed to sense that on this hot day we needed them even more, and were clutch in handing out extra water and cold popsicles.  You couldn’t go 100m without something being offered.  We took pictures, we jumped on trampolines, and our CVIM group kept expanding as we caught Tom and Andrew around mile 8 or 9 and later Mike and Meira. 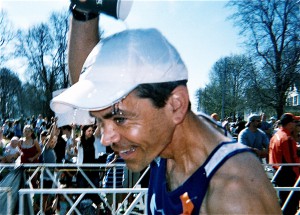 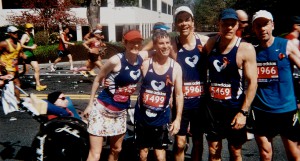 check out Team Hoyt in the background! 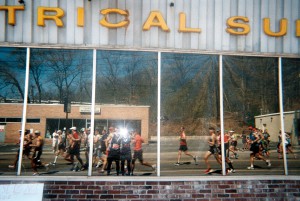 Things got a bit chaotic in Wellesley because everyone (particularly Tom) was stopping for kisses.  I tried to get a picture of the big red lipstick mark on John’s cheek, but the picture didn’t come out.  I got a kiss, but unlike the Katie Perry song, I didn’t much like it.  It was much more fun to watch Tom getting his 40 or so kisses, just ambling down the line of girls, soaking it up.  Happy boy. 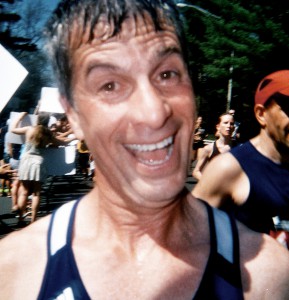 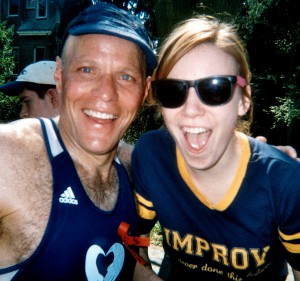 Coming out of Wellesley our group had been splintered by the siren calls of the Wellesley femme fatales.  Out of nowhere Mike Weyendt appeared.  Running with Mike, I was reminded of my Achilles heel.  No, not literally – that little tendon is Aaron’s Achilles heel.  My Achilles heel is running slowly.  It kills me.  Every time I try to rein in my pace so that I can run with other runners at a slower pace I get some nasty injury.   In August I was limping after Cascade Crest more than Aaron after pacing him through a slogging final 30 miles.  Even just a fun little run with a co-worker in Lima in November left me limping for months because of another inflamed tendon on the side of my foot.  So not unexpectedly, after running a half marathon socially with my friends, coming into Newton my left hip was screaming.  And the scream traveled down my left IT band into the outside of my left knee. 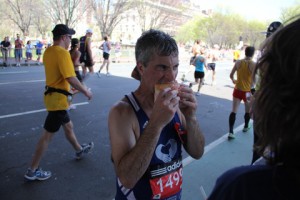 I had only one option: speed up.  I had to drop Mike, I had to run on my own, or I didn’t have a prayer of finishing this run.  Running hard up the hills helped a lot, helped shake things out.  The quicker miles shook out some of the pain, and by the time I saw my parents at the top of Heartbreak Hill, I was more confident that I would be able to finish.  I took some pictures with my parents, stretched out my hip a little, and headed for the finish.  I didn’t want to run hard, I wanted to stop in Boston College for beer, I wanted to slap kids hands, I wanted to swerve to run through sprinklers.  But in pain all you can do is look forward and take heart that every step is getting you closer.  I felt badly about abandoning my friends; I wished they knew that if it weren’t for the pain that I would still be back there with them. 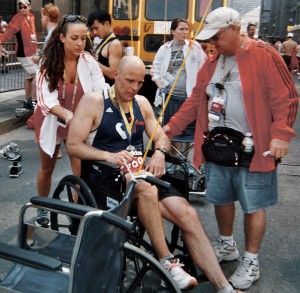 poor johnny was so dehydrated he didn't pee until Tuesday morning

Aaron was amazingly waiting for me at my drop bag bus, and he and I met my grandmother and aunt at the Marriott after the race, as well as my parents.  I word it that way because even though the six of us were all sitting together in the restaurant, there was a huge invisible gulf between my parents and my aunt.  There are two kinds of family problems: those that revolve around money and those that don’t.   The last thing you want to do after you run 26 hot miles with killer knee pain is hang out in a cloud of family financial tension. 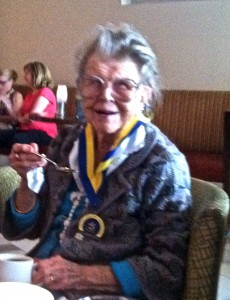 But I wanted to see my grandma.  She’s 93.  I’m terrified that one of these days she’s not going to know who I am.  She brightened up when we talked about her uncle Lauri and she recounted the story of how she used to stand out on the street and hand him oranges.  And how Lauri stopped running the marathon when his brother Onni (my great-grandfather) died of tuberculosis.  Onni was a short-distance runner, a miler.  I have some of the silver award pieces he won that my grandma has given to me over the years.  My grandma also gave me the diamond engagement ring that Lauri gave to his wife.  I can’t recall his wife’s name but she was horrid, I’m told.  But her ring is amazing.  I didn’t have any diamonds to give my grandma, but I draped my finishers medal around her neck.

My knee still kills, a reminder of how I’m always punished when I try to ease my pace to run socially with friends.  Still, it was fun while it lasted.   One of these days I’ll master the Boston Fun Run — maybe in 2015, given that I run Boston on a three-year cycle.  Every time I run towards that never-nearing Citgo sign in those final miles, I swear that it will be my last Boston.  But let’s be serious, I know I’ll be back. 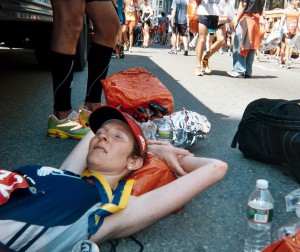 4 Responses to Boston was hot.