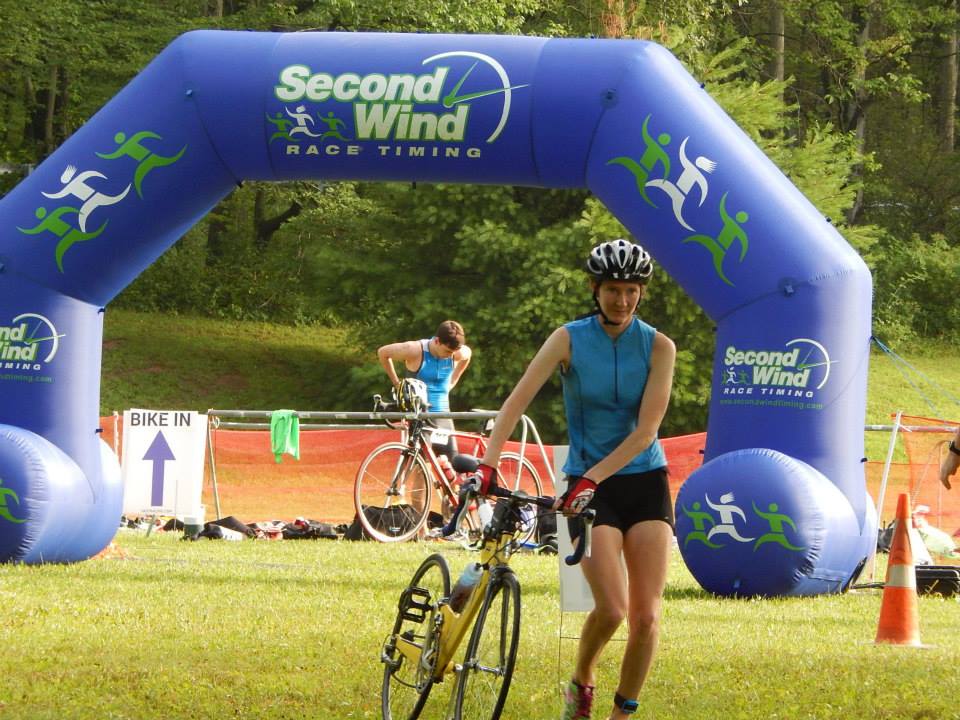 Getting on the bike after the swim. Not DFL!

Some people endure all the travel so that they get to do a race.  I endure the race so I get to do the travel.  –Martha Nelson, July 19, 2015

When we realized that Steve’s wedding in Jackson Hole would conflict with the Lurray triathlon in August, we scrambled to find another triathlon to do this summer.  I had several criteria:

(a) open water swim in a clean lake (no pools, no dirty rivers)

(b) Olympic or half-ironman distances

(d) gotta have some hills (so many of the triathlons cater to people trying to get PRs by being pancake flat. bo-ring.)

After scouring the calendar of tris, we came across Anthracite in Jim Thorpe, PA that seemed to fit the bill.  It was Olympic distance, in a fresh lake, and meandered through the hills adjoining Pennsylvania coal-mining towns, the biggest of which was Jim Thorpe.

Aaron and I have been swimming fairly consistently this year.  We try to swim every Tuesday morning, and occasionally on Thursday, but with my travel schedule this probably averages out to about 3 swims a month.  Not enough to really get in swim shape, but enough to consistently work on form.  I set a very low bar at last year’s Lurray Tri.  But I can now breathe to both sides.  And Aaron promises I’m don’t look like I’m drowning, even if it feels that way.

I can’t really say the same about our bike prep.  I think Aaron has been on a bike for a total of <5 hours so far this year.  The fact that I’m double that made me feel like I had done some training.  But 10 hours of biking doth not a training make.

The day before the race I purchased my first wetsuit.  It went something like:

‘Um, it’s kind of tight around my chest, I can’t take a full breath.’

‘It’s kind of choking my throat.’

My lack of wetsuit experience would become apparent during my 5+ minute transition zone 1 time.  I felt like I was trying to skin a seal.  An angry, stubborn seal that did not wish to part with its epidermis.

After buying the wetsuit, Aaron and I shimmied up rte. 70 all the way to Mauch Chunk Lake, besting the packet-pickup deadline by four minutes.  ‘Mauch Chunk’ was the original name for the town of Jim Thorpe. Let’s see, on one hand we can name our town after a great Olympic hero, or as an alternative something that sounds like mouse vomit.

On our drive up to the lake, the road became noticeably steeper.  ‘Whoa, Aaron, there are hills here.’  We decided that we’d better drive part of the bike course to get a better sense of what we were in for.  There was a lot of muttering of curse words.

‘Mile for mile, Aaron, have you ever done a harder triathlon bike course.’

‘Maybe we should have done some training?’

We picked up our race packets and listened to an extraordinarily efficient pre-race briefing by the no-nonsense RD.  The key message was: don’t fly down the big hills because there will be 90-degree angle turns at the bottom and you will crash.  Got it.

There was only one B&B where you could book for just one night (most have 2 night minimums on weekends).  You couldn’t book online.  Nor by email.  You had to actually call and leave a message.  The kind little old lady who ran the B&B called me while I was boarding a plane in O’Hare and somehow I managed to give her my credit card info over the phone before jetting to Ontario.  She sent us a confirmation in the mail.  With stamps.

The B&B was one of the highlights of the trip.  It was a old Victorian right in the middle of town.  We were put in the ‘Arizona Room’ decorated for Sedona hippies.  Since we had to rise at 4:30 am for the race, our fridge had been pre-stocked with milk and juice and bowls were on the table along with homemade granola and coffee.  And, most beautifully, we were allowed to check-out late so we could shower after the race.

Jim Thorpe is a surprisingly cute and touristy town.  We thoroughly enjoyed Stone Row Pub (which we returned to for post-race brunch).  And the long lost pleasure of thumbing through CDs at a real brick-and-mortar record shop (I bought Aaron the latest Florence + the Machine).

‘Just so you know, this is not how triathlon starts normally go,’ Aaron clarified.  I guess the nice thing about a super hilly bike course is that super type-A triathletes are deterred.  There were plenty of tricked out bikes, but the air was not drenched in testosterone.

The whole Organization of the Gear part remains my Achilles heel.  I had a couple gear fails: (a) my goggles kept fogging up, so I couldn’t see anything (I couldn’t even make out the giant red balls marking the swim course until I was right on top of them); (b) it took me twice as long to get out of the wetsuit as everyone else; and (c) I ran out of fluid on the bike in the baking sun and entered the run completely dehydrated.  When Aaron finished his race, he was amused to see that the water bottle from his bike had been pilfered.  Apparently, a dry-throated marmot had drunk everything in sight after its bike ride and strewn it on the ground.

Triathlon is a perfect space for me to practice not being competitive.   I’ve been a front-pack runner since the day I set foot on a track my freshman year of high school.  I really had no experience in being a leisure athlete.  Even on family ski trips, Nelsons don’t wait for each other.  Nelsons blast down as fast as they can go, and if you can’t keep up…..well, hope you know the way.  My stubby skis and diminutive size meant that turning was never really an option for me.  So when I had to do a mandatory wrestling tournament in 7th grade, my honed survival instincts shot me through the elimination bracket.  I had never pulled girls to the ground before, but being a Nelson had prepared me well, and in the finals I defeated a tomboy named Kate who was 5 lbs heavier (quite a lot when you’re only 75 lbs to begin with).  We had only two weeks of training in wrestling moves, so they were really just cat-fights.

So enjoying being a back-of-the-packer is not really in my DNA.  Ultras have taught me a lot about how to rein in the testosterone and just enjoy the day.  And after a temporary setback at Holiday Lake, where my attempt to run non-competitively this year left a bitter taste that no amount of alcohol and honey has been able to clear, I got Operation Tame the Marmot back on track at Manitou’s.  It’s not the greatest feeling in the world to pop out of the water and have all the bikes gone (it kind of feels like you’re entering a disaster zone of a previously inhabited city that’s been destroyed by a tornado).  But I just take my merry time in the transition zones, enjoy the cool fresh lake and the wind in my face on the bike.  There’s a balance to racing in a way where you’re in check and just enjoying being out there, but exerting enough to still feel satisfied with your effort.  I’m still trying to find that balance, but triathlons are an ideal venue for experimenting.

The old me would have rolled my eyes at placing 3rd in my age group at a dinky triathlon (I think there were only 5 women total).  But Marmot 2.0 held up my little award and smiled for the picture with pride.  Anthracite is kind of a Race for the Birds of triathlons.  Prizes for all!  We even saw some highly acrobatic Eastern kingbirds darting along the shoreline during our post-run splash in the lake.