Highland Sky: Keeping it in the pants 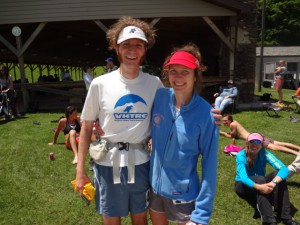 Happy Birthday, Aaron! (his present was a smiley, puke-free girlfriend)

Aaron was right: the 50k distance wasn’t too long for me, it was too short. Although I had been reluctant to try running a longer distance until I had mastered eating and holding my stomach in the 50k, Aaron had a theory that the 50k distance was my sweet spot (or rather my not-so-sweet spot), because the race was long enough to require me to eat a lot, but fast enough that I never had good opportunities to relax enough to chow down.  He had a notion that if I lengthened the distance and could lower the intensity, I’d be able to walk and eat and take my merry time and not experience my stomach eruptions. 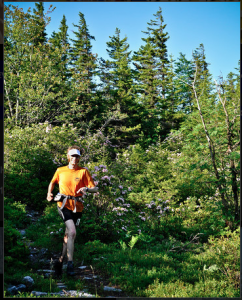 Despite my catastrophically bad 2011 DNF at Highland Sky two years ago, the only DNF in my trail and road racing career, we decided to put Aaron’s notion to the test back at Highland Sky this year. Aaron has a vacation house in Canaan Valley and I have come to love running in the area, wiping away all the bad memories from the 2011 race, where my stomach went south and stumbling across that damned Road Across the Sky was one of my most miserable experiences of my running career.

I had never run as far as 40 miles before, but this year I was prepared. Aaron and I have been running together in the Sodds for two years now and I have come to adore the area and know the trails and terrain. I had a breakthrough a month ago when I finally discovered trail shoes that aren’t so high-cut and don’t irritate my ankle bone (Vasques), and here they made their racing debut and wonderfully spared my feet against the jagged rocks (although they’re a bit more slippery than my Pegasus on wet rocks and wood — I did a lot of pussy-footin’ in those sections). I also made the racing debut of my relatively light 1.5 liter bladder, complete with a drink mix I’ve found that agrees with me: U-CAN blueberry pomegranate.

Still, my ultra newbie was quickly made apparent by the fact that I put my bladder in upside down and Aaron had to fix it at mile 2 when I started complaining about the hose smacking me in the face. The guy running behind us who witnessed the blunder quickly identified me to the woman he was running with as someone who would surely come back to them later in the race. He told me this story at the finish line after the race, when it was particularly amusing as I had just set a new CR. My running green exhibited itself again when I asked Aaron at mile 10 to adjust my bladder straps, as it was entirely too loose and had been bouncing painfully on my poor innards.

But overall I  couldn’t have asked for a smoother sail. Everything fell into place. Even though I felt bad for Doug that he had a work crisis and ended up having to crew instead of run, Let Me Tell You How Much I Love Crewing. Not that there was a lot of crewing to be done here, just one crewing spot at the half-way point. But having Doug drive Kerry, Aaron, and me to the race, Getting to Leave on My Warm Hoodie until the gun went off (yes, it was actually quite chilly at 6am). Divinity! And the highlight of the race was seeing Doug and Joe running up the road, keys and wallets jangling, to get drop bags for me and Aaron at mile 20. 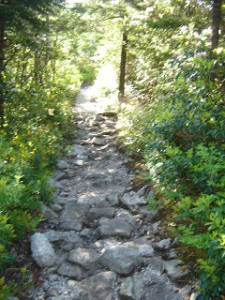 try running this submerged in mud and black water

Although the first half of Highland Sky is quite technical, the second half rewards those who can spare enough juice in their legs to clip right along in the faster road and Dolly Sods plains sections.  This year the first half of the race was particularly arduous, as Hurricane Andrea had dumped buckets on Canaan Valley over the last week, obscuring the rocks beneath long black puddle ponds and deep shoe-sucking black mud. One unfortunate runner this year actually lost her shoe in the mud and had it swept away by the water and had to run 7 miles with only one shoe to the next aid station. Due to the mud, the course had to be altered slightly at Timberline, going down the long and winding Salamander ski slope instead of the infamously steep ‘butt slide.’

Aaron ran with me for the first half, splashing through the puddles and doing our darndest to keep upright. During the first half we also ran with Ragan for a bit, and three of us enjoyed a good 3-WUS pee at the top of the first climb. But there was a luscious long technical downhill after the 2nd aid station, and wet rocks be damned, I let myself enjoy it thoroughly (and poor Aaron had to follow along), and after that we parted with Ragan. At mile 20 is the major aid station, where Doug and Joe provided excellent crewing (and an excellent opportunity for Kerry to drop when her tendinitis flared up). Aaron’s heel bursitis was also flaring, so at the aid station he told me to ‘Fly away, little bird’ for the next 7 miles of the dreaded ‘Road from the Sky’. 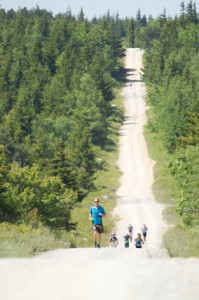 the endless, open Road Across the Sky

I was reluctant to leave Aaron, I was so enjoying his company (and it was his 36th birthday!). But he made a firm call, insisted I go on, and I trusted his decision. Running the long, straight road was dull enough, so I was particularly lonely running it without him. But after that slogging slow mudfest, it was a somewhat welcome relief to be able to tick off some easier miles and look at something besides your feet for a bit. And there sure is something nice about getting to that aid station at the end at mile 27 and being about to look back and see a mile of empty road with no one coming. I don’t let myself look back much when I run, it’s kind of a soft rule of mine just to run my own race and not bother with what’s coming, but there were three spots where you could see so far back that I couldn’t resist: at the end of the Road Across the Sky, at the last aid station, and one last time on the last road to Canaan Valley resort. Each time, the road was empty, allowing me to relax.

In the Sodds I was happy to catch up to two guys, including Matt Bugin, whose wife Holly I know from previous races. Given my complete ignorance of how to pace a 40-mile run, particularly those long gradual climbs in the Sodds, I was glad to have some guys to key off of, and I ran behind Matt to the end of the Sodds, where I took off down the long Salamander Ski slope. I spent much of the second half just trying to stay calm, cool, and collected. I sang along in my head to teh White Stripes, ‘We’re Going to be Friends.’ Whenever I felt my pace creeping up on me, I chided myself to ‘keep it in the pants’. Somehow this catchphrase always got me to slow down, maybe because it made me laugh so hard. 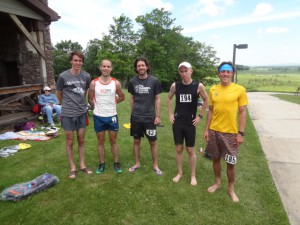 Youngster Jake Reed ran away with the men’s race, leaving Jeremy Ramsey a bridesmaid for the nth year (although 25, Mr Reed is not new to ultra running, winning Promise Land and Terrapin Mt a couple years ago — tho this was his first HS)

Although, as Brian G will attest to from last year, the last 5 miles of straight road are somewhat boring and onerous, it is awfully nice at the end of a race to be able to look back a half mile behind you and see nothing but empty road. By the time I rolled into the last aid station, I couldn’t see any runners behind me. I wasn’t wearing a watch, so I had no inkling that I was potentially set to break a CR. Apparently RD Dan Lehman had been tracking me and I went through the last aid station at 6:30-something and with 4.1 miles to go the CR was 7:03:50-something. But the end was mainly road (except for one abominable stretch of high grass that had turned to swamp in sections — by far Brian’s least favorite part of the finish when I paced him last year). 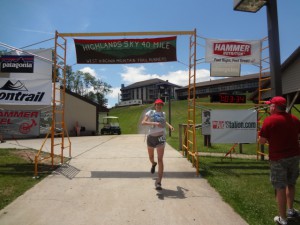 With no one behind me, I walked wherever it suited me. But fortunately after running for 7 hours there was an overwhelming drive to just get ‘er done and I did sneak below the previous CR by a little less than a minute (Aaron and I were off somewhere chatting when the race started, so it would have been a bit frustrating if I’d missed the CR by seconds). More importantly, I felt strong and good and held my stomach, as my goal had not been to win, but to run a strong, comfortable race where I felt good. The last two aid stations I wasn’t having a whole lot of appetite, but I took a whole cup of ginger ale and made myself walk out of the aid station sipping it until I finished it. Honestly, if I had won the race, but barfed and felt terrible in the process, it would have been more disappointing than finishing 2nd or 3rd. 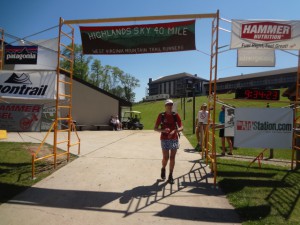 It was nice to be able to celebrate my good race with other WUSsies at the finish. Ragan finished second behind me, completing the WUSsie 1-2 domination reminiscent of the Women’s Half Marathon. She’s coming off a challenging spring of training while on sabbatical in NYC, which has a dearth of parks you can pee in. And Michele represented by winning the Masters division. It was an absolutely beautiful day, and Doug and Kerry continued to be angels of divinity by fetching a couple Siriani’s pizzas. There is a very friendly vibe at the finish area of Highland Sky, probably because all of us are so grateful to have had the opportunity to experience such a beautiful course — and so relieved to have survived its punishing design. 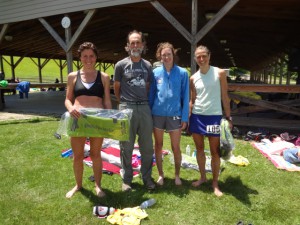 Dan with his fast ladies

When we were driving home from the race, I remarked to Aaron that even though part of what we love about coming to our vacation house here in Canaan is getting away from everything and being entirely unfettered and unstructured about time and commitments, the area has such a friendly and vibrant local community (including RD Dan Lehman, Adam Casseday, Luke Fleishmen), that we should try to be more involved, even if it means having to set an alarm and plan a day from time to time.

9 Responses to Highland Sky: Keeping it in the pants