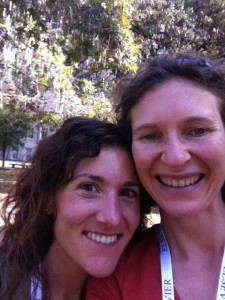 One of the great perks of my job is my periodic assignment to host glamorous Italian guests, like Alice (pronounced AH-LEE-CHE) Fusaro from Istituto Zooprofilattico Sperimentale delle Venezie (essentially a regional veterinary diagnostic lab outside Venice).  Many of you remember Alice and Isabella from the WUS Italiano last June where Keith and I wore adorable matching green Catawba shirts and red shorts in honor of our Mediterranean visitors.  Isabella is currently busy finishing her dissertation, so it was just Alice and myself this time.  But what many of you don’t know about Alice is that she has seen the light and taken up running!  And no, Alice is not some casual jogger, as Aaron can attest Alice is quick!  At WUS Elezione last night she dropped the Joe-Doug-Art group behind within minutes of entering Melvin Hazen.  Despite the fact that Potomac Heritage was her first trail run ever, Alice already showed mastery of the dark/roots/rocks/leaves/hills Tuesday night.  At this rate, Alice will soon be taking the running scene by storm. 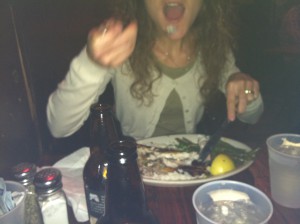 At Coop’s Place in New Orleans

Last time, our visit to New York City got a little wild, so we opted for something a little tamer like…..New Orleans.  We made the most of our days at the Molecular Epidemiology and Evolutionary Genetics of Infectious Diseases (MEEGID) Conference, and by that I mean taking in our fill of New Orleans cuisine and live music.  That city has soul!  We knew that we were in for a night of good food when we walked into Coop’s and one of the patrons squashed a giant cockroach under their shoe right in front of us.  I know I could never live there — it’s even swampier than DC — but man is that a great place destination for a long weekend.  It comes with my highest recommendation — but don’t go to Bourbon Street where all the tourists go, go to Frenchman Street.

Alice had never run on trails, never run a race, and never run more than 10km, but when I told her about the Potomac Heritage  run, she announced enthusiastically she was game. 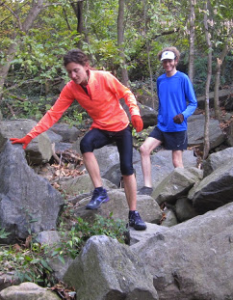 Alice fearless on the rocks

Like the influenza virus Alice and I study, Alice rapidly adapted to her new environs, skipping over rocks and roots and leaves like an Italian ibex and readily adopting WUSsie customs, including humoring Gary, running farther and up bigger hills than she ever had before, and even being unfazed but what became a wilder version of the post-run party at Kerry’s house (we departed after the second raw egg downing because Alice needed a picture of a panda at the National Zoo for her husband back in Italy, who is apparently fond of the Chinese bear). 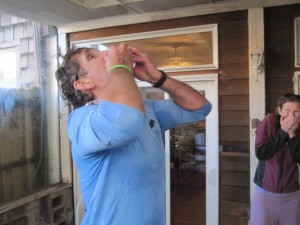 quattro takes the post-PH party up a notch

Hooked on the newly discovered  joys of trail running, Alice even came to WUS the next Tuesday for WUS Elezione.  CPB&G was overrun by a party of election watchers, so Alice didn’t have a chance to partake in the famed Aaron special pizza.  But good Vietnamese food is harder to come by in Italy than pizza, so Nam Viet made a good alternative.  It took time to explain to Alice how the US electoral system works, why my father was so grumpy about Obama winning, and why the US doesn’t allow for three days of voting like Italy does so we all don’t all have to stand in line for two hours.  But god it was good to see Obama take the pie.  And yea for gay marriage in Maryland!

It was very sad to see Alice go.  But at least I have the consolation of knowing that in late February I’ll be going out to visit her in beautiful Padua when we hold our workshop there.  We have plans to go skiing in the Dolomites!