When will it happen? Neal’s take

When did it happen? 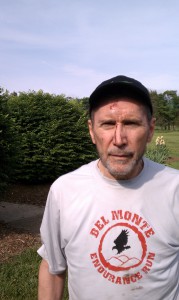 When did it happen?

Well, it has been four years since my last race report; five years since I finished all but the last 3 miles of “Massanutten;” and seven years since my last “official” 100-mile finish.  Perhaps it is time for another report.  I used to enjoy the recall of another 100-mile attempt by putting pen to paper with emotions laid bare.  I enjoyed sharing the experience.  But then as my DNF’s mounted and my performances became more lame, I lost the thrill of the recall and became somewhat embarrassed to share my experience.  Why did it happen?

Ultra running and especially trails ultras continue to capture me.  The opportunity for the shared participations of the runners, the crews and the pacers with events that push the limits of human endurance, is mystical.  The opportunities to unite families in such a special way is precious.  No wonder this dance is so difficult to forfeit.  But is there a need to release from the dream?

The year 2006 was pivotal for me.  I was prepared for MMT and for most of it I was having the best 100 miler of my life.  But then the “wheels came off” so they say and the last 20 miles were a struggle.  Yes, my back gave out and I was a rumpled mess coming in to Elizabeth Furnace.  I dropped with only 3 miles to go.  I had known that I had a “slight” scoliosis, but I had no idea just how bad it had progressed in recent years.  I got home and had an x-ray which (as a scoliosis surgeon myself) frankly scared me.  It scared me not so much for the possibilities of progressive deformity and maybe surgery, but for the thought that this might be the thing that would stop me from participating in those mystical experiences I had come to love.  Yes, I was panicked and proceeded to work through any number of back braces that might allow me to continue to run.  And I finally did find one; not the expensive spinal orthotics I tried from our orthotics section of the Cleveland Clinic, but a $12 elastic back support I found on sale (for $8) at the feed store I use for my barn animals.  It took a bit of getting used to because it squeezes the abdomen so much that diaphragmatic breathing is all but nil.  On the other hand, It helped to keep my ribs off of my pelvis and somewhat stabilized my core.  So “deal with it” and move on!

I then entered into a three-year cycle of attempting to complete the Leadville 100.  The Leadville area is special to my family because of its proximity to the 10th Mountain Hut and Trail System we have used every year for the past 20 years for our backcountry skiing adventures.  But I could never get beyond the turnaround at 50 miles.  And then I also noticed after attending one of the LT 100 Training Camps, that even with fresh legs, I was barely making the projected time cutoffs.  Oh, it must be the altitude!  But then, for my last attempt at Leadville I decided to train at home by wearing 20 pounds of weights around my ankles and doing hill repeats.  Oh yes, that would do it; wrong!  That only made my right knee swell like a bowling ball with pain that made it difficult to walk well, less say run.  Interesting,  “must be a bursa.” (Ignorance and Denial)

Then came 2009.  I had made the Western States Lottery and had a great “game plan” for my training.  The first “training” race on my agenda was the Old Pueblo 50 miler.  The weekend before the race I went for an “easy” 11 miler but when I got home my right knee was swelling like a balloon and very painful.  I tried to run the next day, but could barely walk.  Panicked, I got an MRI on Monday; found torn meniscus; had surgery on Thursday (found torn meniscus, and arthritis); and spent the next 14 months painfully limping threw a series of unloader braces and miserable race attempts.  And then, one year ago, a physical therapist friend of mine from Australia (Jenny McConnell) taught me a method of taping for “synovial fat pad impingement” and by some miracle, no pain!  I could run without a knee brace.  I could run!  (Oh yes, I still need the back brace.  I’m afraid I’m stuck with that one.)  And so the dream survives!  Bring on Massanutten and those last three miles!

What a great spring this has been with the anticipation of MMT.  Yes, training in Cleveland is problematic, but taking two weekends to visit Sean in Leesburg and training on parts of the MMT course was great.  There was just one small wrinkle to my visits to Massanutten.  Even with fresh legs, my times on parts of the course were just on the bubble of projected cutoff times for MMT; visions of Leadville!  But the thrill of being a participant was once again precious.  Certainly a year ago I had doubts of even running at all without pain and brace.  So this is truly a gift I have received and I understand that.  To be there at all is a gift.  I did not publicize my 2011 intentions to my friends.  I was going to run MMT and finish and then share the experience.  But this year my performance reflected my “diminishing skills.”  Despite the support from Sue Ellen and the anticipation of Sean being my pacer, my times at each aid station were just “on the bubble.”  I had no cushion at all.  I was running and I was thrilled to be intimidated by “all those rocks!”  But I could only muster bubbles.  The climb out of Elizabeth Furnace did me in.  I was not at all metabolically nor physically trashed; just not enough stamina to climb at the necessary pace to keep me legal.  I missed my time cutoff at Shawl Gap (mile 37.6).  I had to turn in my number and go home.

So what is the message?  As I ran in to my final aid station, the captain congratulated me for making it this far and then told me “Jack, there are easier hundreds out there.”  Yes, others have been telling me that as well.  “There are easier hundreds out there.”  But we know it is not just about the miles!  It is not just about running 100 miles.  It is about overcoming fears and obstacles and achieving our dreams.  It is about the dreams!  As I sit here in a coffee house in Leesburg, there are still runners chasing that dream.  There are still runners crossing that final grassy meadow to the finish line of the MMT 100.  There are still runners.  I should be there with them.  I should.  I still have two legs and a heart at least at this point that can withstand the effort; the effort to train and to finish.  Age is relative and I’m not about to use that excuse.  Not yet.  Yes, there are other 100’s out there.  And there are 50 milers and 50 K’s that are special opportunities to share.  There are!  But then again, there is the mountain.