DC Race for the Cure 5k 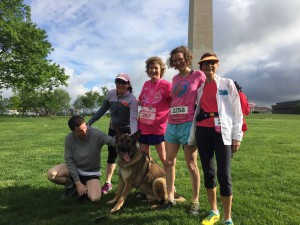 Cecile, Bernard, Rosemary, Mom, and I made friends with a rock star German Shepherd after the race.

Momma Jill’s Performance of the Decade

My mom’s been running the Susan G. Komen Global Race for the Cure 5k for 20+ years, marking 20+ years of cancer survivorship.  Somehow, over these two decades my mom has reversed the course of aging.  At age 69 she is actually running faster than she ever ran in the previous two decades.  This year, following some quality prep at the tough, hilly Race for the Birds trail race in April, the roads around the Tidal Basin must have seemed breezy, and she cruised to a 2-minute PR in 37:13.

I Discover There’s Such Thing as a ‘Negative’ Prize

My quads were still chewed up from the prior week’s Promise Land 50k, and  I was in no shape to race.  But the Race for the Cure is more fundraiser than road race, and I realized 30 seconds into the race that an easy hand gallop would still win.  I ran 1:30 slower than last year’s win, but hey, a win’s a win.  ABC 7 was there with a camera crew, and it was fun to tell the story of how I’ve been running this race for 20 years to celebrate my mother’s survivorship.

So I’ve been running competitively for 20 years, and have won all kinds of prizes of varying qualities, but I never knew that you could win a ‘negative’ prize.  This is the email I received the week after R4C:

Nice chatting with you just now; congratulations on being the top female runner at the DC Race for the Cure this year!

As I mentioned on the phone, as the top female runner you will receive a certificate for 25,000 American Airlines miles for your use.

I’ve attached the W9 form for you to complete.

If you could please send me your mailing address, I will send you your certificate via overnight mail in the next day or so, and you should have it by Monday.

So, let’s see here: I have to pay hundreds of dollars in income taxes for airlines miles that I likely won’t be able to use.  I won 25,000 American Airlines miles at last year’s race, and I pulled my hair out all year trying find a route where I could use them.  Never found a way.  The American Airlines AAdvantage frequent flier program was recently ranked as the worst program of all US airlines by the Wall Street Journal, which noted the paucity of seats available to frequent fliers on American’s flights.  American Airlines has not been on our good list after charging Aaron $210 last month so that he could still use the return leg of flight to Boston after we got stuck in Colorado during the mammoth April snow storm.  In the end, I declined the prize.  Fortunately, the prize is the least of the reasons why I run the Race for the Cure.