Apologies for the delay in this posting.  Last week I wrote a lengthy report on the Women’s Half Marathon, saved it 4-5 times as a draft on wussies.net and then Poof it disappeared.  I’m not going to try to reconstruct that detailed report again, I’ll just be frustrated that I can’t recall exactly how I crafted it, but I have a few things I’d like to say. 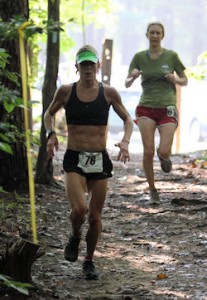 First, I’d like to heap some praise on the volunteers and people who were along the course – not just for the usual general things like hard work and generosity of time, but for something more specific: tone.  I had a bit of a rough day out there: I’m worn out and undertrained from weeks of travel (Nepal, China, Malta, I’m writing now from Minneapolis); I’m still dealing with a foot problem that isn’t too painful to run but is too painful to run normally, and it’s set off a cascade of troubles in other areas and muscles; and maybe, as Keith Knipling so put it, ‘I’m distracted’ by some pretty life-altering recent events.  Throw on top of that getting my feathers all ruffled by some new unexpected competition, and I think everyone could see on my face that I was troubled early in the race.  I welcome a good race, but it’s a whole different thing to get blindsided by totally unexpected competition of an unknown quantity, especially on home turf with some high expectations on a day when you’re not physically sharp.

Maybe it’s because the VHTRC has a lot of experience offering words of encouragement to runners who are not looking too good deep into a long ultra, but the ‘cheers’ I received along the course were so welcomingly subdued and calm.  I say ‘cheers’ in quotes because they were subdued, calming, reassuring.  Having run since high school through throngs of parents screaming ‘go get ‘er!’ I can appreciate this greatly. 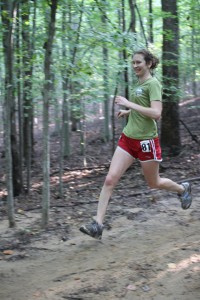 Aaron gets me to crack a smile

One of the things I liked least about high school cross country were the ridiculous things parents yelled at the runners, parents who didn’t know a thing about running (fortunately my own parents were not bad).  I could never understand why people would shout things at me like ‘She’s right ahead of you!’ as if I had a field of vision that was limited to 3 inches.  Fortunately my team knew to yell things at me like ‘Go, Martha!  Smack It!’ that would get me to crack a smile and relax, which was far more likely to get me in the mood to hunt down the competition than ‘Use your arms!’  Other inanely unhelpful lines included ‘Use the hill!’ and ‘Time to go!’  I know there are some classics there I’m forgetting so if anyone else can think of any more, please add to my list.  I think the best cheer I’ve ever heard is Penn State legend coach Harry Groves yelling at one of his runners to move up on the runner ahead with the line, ‘Sniff it!  Sniff that butt!’ 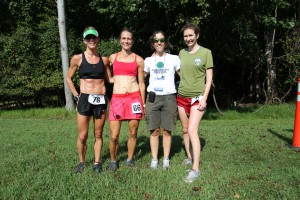 not really looking like the champ in this picture