All Paths Lead to Umstead 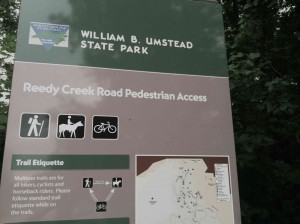 When I was a child I would tell people I wanted to be a veterinarian when I grew up.  I would then return to smothering my face in my cat’s belly, or cantering around the house jumping over intentionally placed obstacles, making sure I corrected my leads in the corners.  My interest in animals persisted through high school, and when I got to Stanford my freshman year, I had decided that I wanted to be a wildlife veterinarian, something that would combine my loves of creatures, science and medicine, and adventure in the woods.  Stanford didn’t work out, and transferring to Amherst College for my sophomore year was the best decision I’ve ever made.  But Amherst was a decidedly non-professional school.  There were no Business, Law, or Medical schools, not even an Engineering program, which were all deemed too career-track.  Amherst was about philosophy and broad liberal arts learning, focusing on how to think rather than learning a trade.  English was the most popular major.  I loved Amherst, I took classes in Art, Art History, Religion, Creative Writing, Biology, Jurisprudence, Russian Literature, it was all cranially expansive and exciting.  I thought about going pre-Med (I was a Biology-Russian double major anyway), but the pre-Med kids didn’t seem like my ilk.  The pre-Med kids were the ones who quibbled about how their exams were graded and seemed driven by resume-building.  They were the triathletes of the academic world.  Other than pre-Med, there wasn’t much career-building support at Amherst, and there certainly wasn’t a pre-Vet track.  I had no idea there were requirements for veterinary school, and was far too wrapped up in philosophical questions to bother with such practical details.

Although I agree with Amherst’s high-minded philosophy in concept, most of Amherst’s graduating seniors are utterly unprepared for the real world and have so little clue what they’re going to do with their knowledge of Kant and Herodotus that the majority fall into Wall Street and finance by default.  I thankfully avoided that fate, and am so fortunate to have slithered my way back to the natural sciences and gotten my PhD in biology.  I won’t go into the whole circuitous route from Amherst to the NIH, but here’s a brief synopsis: after Amherst I worked for a Diabetes newsletter, then I backpacked around Southeast Asia with a high school friend for six months, and then I got a job at RAND Corporation doing consulting work in the field of global health.  Then I made what I consider the second best decision of my life in getting my PhD at Penn State with Eddie Holmes, and then I took a post-doc at the NIH.

But as I toured NC State’s animal hospital, watching veterinarians perform an angioplasty on a dog, I had this immensely gratifying sense that I had finally ended up where I belonged.  I was 36 hours into my marathon interview as a candidate for the Infectious Disease cluster hire at the NC State veterinary college, which was all going splendidly.  And I had this feeling of relief that I would have been a terrible veterinarian: I would have hated dealing with sick, hurting animals, watching them suffer.  I’m not nearly practical-minded and details-oriented enough to operate in a hospital, where policies have to be  meticulously adhered to.  But as I conversed with the veterinarians I realized that we all played our own roles: they were good with scalpels; I was good at thinking about the big questions, things like the spatial dynamics of the pathogens they were encountering (was canine influenza endemic in North Carolina, or were they simply seeing spillovers from other areas?).  I wasn’t supposed to be a vet after all — all those endless requirements for admission did a good job of weeding out people like me who have difficulty with too many rules and would never be able to follow procedure in a clinical setting.  Rather, I had arrived at the College of Veterinary Medicine through my own circuitous route, and had experiences and skills that would complement the activities in the clinic.  I could never have planned it this way, but things seemed to have a way of sorting themselves out.

To clear my head the morning of Day 2 of interviews, I put on my running shoes and ventured beyond the Comfort Inn.  I quickly encountered a whole network of trails through the woods, first through Schenck Forest and ultimately landing at a huge park called Umstead.  I had to hurry back for my breakfast interview, but I trotted back with a relief that Raleigh had a nice set of forests near the veterinary college.  This might work, I considered.