Highland Sky: Keeping it in the pants Lyme rhymes with It’s about f’in time!

Nothing says summer like frozen custard, watermelon, and the purple trail. 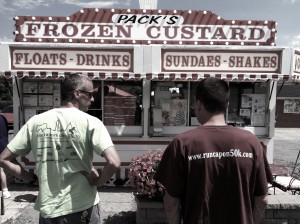 schmitty & seanie: the last of the leesburg mafia

I liked driving to Catherine’s Fat Ass with Brian S. Sure, he made us arrive a full hour before the run started, but this was more than redeemed by stopping at Sheetz twice and even taking me and Sean to Pack’s.

For some reason this year’s Catherine’s course was substantially altered to an out and back (I’m not sure because I was napping in Brian’s car for most of the pre-run period). Sean was very cranky about this, probably because there wouldn’t be enough rocks. So I suggested we just do the old route and as long as we got aid a couple times it would be fine. Brian, Sean, and I recruited Keith, Neal, Matt B, and newbie John A. as fellow renegades to go the old route.

I liked the run. It was certainly hot in the sun, but not terribly oppressive. I was very disappointed to not see a bear again after all the reported sightings at Jeremy’s Run a few weeks ago, but that was more than made up for by the good company. Sean, Neal, John, and I formed a pack for the first ten miles and then after Sean and Brian went short Matt, Neal, John and I ran together to the finish. It was great to see Neal out there after his long bout with cytomegalovirus this spring. And now that Sean has moved to Leesburg I hardly get to see him at all, so it was great to run with him too. And it was John A.’s first ultra experience — quite an intro, what with the heat, the hornet’s nest (we all got stung, including John in a place too close for comfort), the limited aid, and the purple trail. But John was very game and a cheerful new addition. He also wrote a much more detailed blog about our jaunt here. 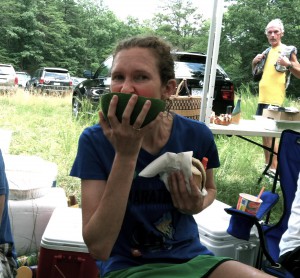 When we pulled into the finish the parking lot was abuzz with people, burgers, and watermelon. Despite opting for the 20-mile version, Brian and Sean had gamely waited for me. I had run out of water with a couple miles to go, so the watermelon (seedless AND organic) was particularly refreshing. There were a lot of people I wanted to catch up with more, but I had already pulled two ticks off me just sitting there in the grassy lot (which I’m particularly paranoid about right now because we suspect Aaron’s chronic fatigue is due to lyme disease) and Sean and Brian were eager to get to the Pack’s frozen custard stand we’d spotted — which, after five and a half hours in the heat, sounded like a pretty darn good idea.

One Response to Catherine’s Fat Ass