Comeback Shoes for the Taking

Aaron dislikes guessing games, especially poorly defined guessing games.  ‘I can’t even begin to.  What are the parameters of this said goal?’

‘Oh, okay.  Umm… To crush your enemies, see them driven before you, hear the lamentations of their women?’

Aaron was unwilling to offer another guess.

‘I want to win Western States.’

He grinned.  ‘You mean the Tevis Cup.’

‘You don’t think I can do it.’  I was incredulous.

‘What’s a winning time for horses?’

‘Doesn’t really seem like you have the requisite expertise there.’ 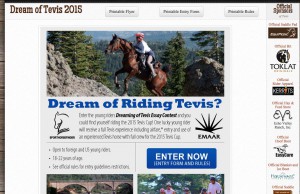 The first time I ever rode a horse was on a family vacation at Lone Mountain Ranch in Montana when I was five years old. The animal was a large chestnut quarter horse with a white blaze named Nugget. I wore a massively oversized Washington Redskins ball cap, which didn’t cover my ears, and they were burnt red at the end of the long day.  Nugget liked to eat a lot of grass, and clearly was not bothered in the least by my tiny feet that flailed like duck wings, not even reaching his flank.  I fancied myself a great horsewoman (I had read all the Black Stallion books), so it was humiliating when they had to attach his bridle to the lead horse with a rope.  But it was a beautiful ride through the Montana mountains. A golden eagle soared above. Mule deer bounded in the distance. I wrapped my fingers through Nugget’s mane, and nuzzled his smooth neck with my cheek. My parents had no idea how much trouble this ride would cause in the Nelson household for years to come.

My family lived in a suburb a couple miles from the Washington, DC border. When I turned eight I started taking horseback riding lessons at the nearby Meadowbrook Stables. One by one, my friends eventually tired of horses, and quit, and my parents expected me to do the same. I had lot of other interests: I was also on a travel soccer team that made it to the finals of the Maryland State Championship, I played basketball and tennis and showed promise as a runner. My elementary school gym teacher had already phone up the high school track coach after he saw me run the mile.

Tiger was my first pony love.

It sounds absolutely absurd to suggest that my upbringing was anything but supremely privileged.  I went to sleep away camp.  My soccer team had a professional coach.  My family traveled to Europe when I was 10 to visit our Finnish relatives.  By all American standards I grew up with the world on a silver platter.  But in the context of the DC horse world, we were dirt poor.  I wasn’t going to get my own pony.  I wasn’t even going to get Devon boots.  Everything I owned was used — my show jacket, my chaps, my jodhpurs, my boots.  At the other end of the spectrum was Paige Johnson, who boarded her million dollar ponies at my barn.  Her dad owned BET television.

My parents saw the writing on the wall.  They saw how dejected I’d get when my exasperated instructor fumed about how I would have won the Pony Medal if it weren’t for my outfit: the color of my jodhpurs was wrong, my jacket was ill-fitting, my short boots were for kid riders….This was not the world for the Nelsons. 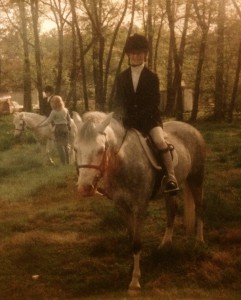 Lee was not impressed by the garters and short boots look

I had to give up horses in high school.  I had advanced to a point where I needed to start riding the A-rated shows in Culpepper.  My parents tallied that it would cost upwards of a grand a weekend and laughed.  But I never forgot about horses.  In college when I had a free Saturday without a game or a meet, I borrowed some friends’ riding clothes and competed in the inter-collegiate horse shows, winning some of the over fences events. It was my first time wearing tall boots.

These days I think all the time about taking up riding again.  But in the DC area it’s still $70-100 for a 1-hr lesson.  DC is teeming with lawyers and lobbyists who can drop that kind of money without blinking.  Aaron and I have great jobs that afford us a very comfortable lifestyle.  But not quite that comfortable.

When I was interviewing at veterinary schools, many of the profs at Cornell and NC State had horses.  Visiting Ithaca, I envisioned exactly what my new life would be like: a medium house with a sprawling track of land, some mutts and barn cats running loose, and a couple of thoroughbred rescues off the track that started off as crazies but came to love the trails as much as we do.  I’ve still got many miles to go before I get to this dream.  Miles on my own two feet.  But if Aaron’s counting on the dream fading over the next 20 years, he should remember how I told him I don’t want no wedding ring: just a horse.