Dan Weinberger had delayed coming to WUS for as long as he possibly could.  For over two years he would entertain the idea and then concoct last-minute excuses that centered on his perceived lack of fitness.  Aaron and I had pretty much written him off.  But D-Day had come, and with only one day left in DC before moving his life to Yale University in Connecticut, Dr Weinberger came through in the clutch!  On Tuesday, December 18, 2012, Dan and his friend Adam arrived at Kerry’s house, ready to rumble with the Flashlight People. 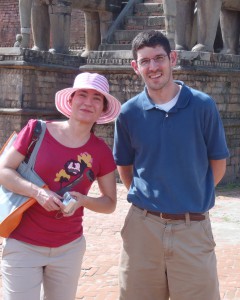 Cecile and Dan in Nepal

Dan has been part of our Fogarty family at the NIH for over two years now.  We’ve had more than our share of work adventures in China, Nepal, Malta, and Peru (twice).  He fills a key niche at Fogarty: Dan studies bacteria while we do viruses, and, even more importantly,  Dan is often the sole representative of the male gender when we get together to have lunch on the patio or travel to places like Malta.  Dan’s low-key mellowness can be a vital antidote to our occasional estrogen overload, and his male perspective comes in handy during lunchtime banter.  If we have any beef with Dan, it’s that sometimes he’s too good — like when he refrains from a lunchtime escape to the nearby Indian buffet because he has too much work to do (but could we expect anything else from a Harvard boy?)

But that’s part of why it was so great to see Dan bust through that ole straightjacket of convention and come to WUS on Tuesday.  To sweeten the pot even more, he brought his high school friend Adam who COLLECTS MUSHROOMS!  Only a handful of WUSsies have any inkling how obsessed I am with mushrooms, but Aaron would be happy to recount the ordeals he has to endure in the name of my mushroom fancy.  (Most recently he had to watch a documentary called Know Your Mushrooms! which he didn’t find half as scintillating as I did.)  My love of mushrooms was acquired during my early 20s during travel to Italy, Russia, Japan, and other countries that revere their mushrooms with an intensity that Americans would associate with lunatics.  I won’t bore you with a long-winded Ode to Mushrooms explaining why they are divinity on Earth — partly because my fervor cannot be attributed purely to the physical properties of the mushroom and is more difficult to explain, much like my kinship with four-leaf clovers.

Adam and I proved that you can indeed find edible wild mushrooms in Rock Creek Park.  In winter.  In the dark.  We returned with a plateful of large oyster mushrooms that are still in my fridge waiting to see if I get the guts to try cooking one.  I can happily confirm that Dan and Adam relished their inaugural WUS experience.  Maybe when Dan visits from New Haven he’ll stop by again.  In the meantime, Adam and I will be out hunting for mushroom booty in his honor.

One Response to The Long-Awaited Weinberger WUS