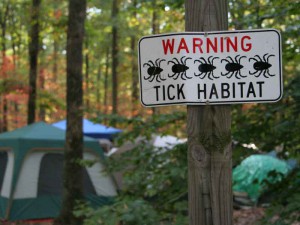 Question:  Should I be freaked out about Lyme disease?

Answer: (a) It depends on where you live.  In the 1990s there wasn’t much Lyme reported in Virginia.  But in the last decade Lyme has been spreading throughout the Northeastern US, and increasingly into Virginia and parts of West Virginia (a trend that is only likely to continue).  In 2012, 95% of Lyme disease cases were reported from 13 states: Connecticut, Delaware, Maine, Maryland, Massachusetts, Minnesota, New Hampshire, New Jersey, New York, Pennsylvania, Vermont, Virginia, Wisconsin.  A number of VHTRC runners have had nasty long-term Lyme infections that knocked them out of commission for long periods of time, highlighting the need for knowledge and awareness of Lyme in our running community.

For years, the CDC has reported around 30,000 cases of Lyme in the US a year.  Last year the CDC reported that the methods it has relied on has under-estimated Lyme in the US by a factor of TEN and more like 300,000 Americans are infected each year.  I interpret this as an admission that we really don’t have a clue how many people are infected with Lyme (a 10-fold difference in estimate is HUGE), and reflects how methods of reporting, diagnosing, and estimating Lyme prevalence in the US remain as much art as science. 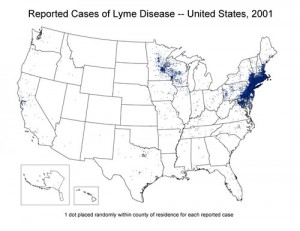 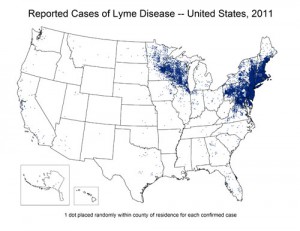 Answer: (b) It also depends on the time of year.  The spirochetal agent of Lyme disease, Borrelia burgdoferi, is transmitted to humans through a bite of a nymphal stage deer tick Ixodes scapularis.  The highest risk for disease transmission to humans occurs during April – September (peaking  in June-July) when the activity of deer tick nymphs is highest.  However, adult deer ticks are still active in cooler fall months.

Answer (c): Ultra runners are particularly at risk because they spent so much extended time in the woods, are often too exhausted after 24+ hours of activity to bother with anything amounting to a thorough tick check, and are tough, indepedent buggers who are more likely to wrestle with chronic symptoms than to seek medical treatment.  Some well known runners have had debilitating and long-term battles with Lyme, including years of symptoms and misdiagnoses by doctors, including Dusty Olson and Burt Yasso.

Question: I got bit by a tick.  Should I freak out?

Answer: If you got the big fatty dog tick you’re in the clear — they don’t carry Lyme.  It’s the smaller deer ticks (and the tiny deer tick nymphs, which are approximately the size of the head of a pin) that are less likely to be detected while engorged and of greatest concern.

Question: I think I got a nymphal deer tick.  Am I screwed?

Answer: Only if the tick has been attached for over 24 hours.  Infected nymphs begin to transmit Lyme approx. 36 hours after attachment. The nymph increases in size as feeding progresses (see below), so you can estimate the duration of feeding and probability of transmission based on the tick’s appearance and size.

Question:  This is complicated.  Can’t I just wait and see if I get a bulls-eye rash?

Answer: An estimated 70-90% of Lyme cases present with a distinct bull’s-eye rash (called a ‘erythema migrans’ (EM)) that emerges after a delay of 3-30 days (average is about 7 days).  But this truism has made it much more likely for cases with rashes to be diagnosed by physicians and cases without to go undiagnosed, so this estimate is biased.  Rashes may also appear on one’s back or in an area that is not readily visible.  Aaron has no recollection of a rash from his case.  Other clinical signs of Lyme include: facial or Bell’s palsy (loss of muscle tone on one or both sides of the face), severe headaches and neck stiffness due to meningitis (inflammation of the spinal cord), pain and swelling in the large joints (such as knees), shooting pains that may interfere with sleep, heart palpitations and dizziness due to changes in heartbeat.  Even without a rash or any of these symptoms it may be prudent to take a prophylactic regimen of doxycycline antibiotics if you think you have been exposed to Lyme. 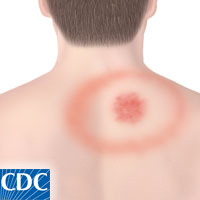 Question: Why are doctors (like the infectious disease doc Aaron visited) sometimes reluctant to test for Lyme?

Answer: If you have the bull’s-eye rash, you’re in good shape — even a dolt doctor will know to order a Lyme test or even just put you straight on antibiotics.  But if you don’t have the rash or swollen joints, it can be hard to diagnose Lyme clinically, as other symptoms tend to be variable and non-specific and could be caused by a host of other pathogens (there are even other tick-borne illnesses in our region) or conditions (chronic fatigue, fibromyalgia, etc.).  Lyme falls into that grey category of illnesses with non-specific chronic symptoms like fatigue that are hard to pin down.

Furthermore, there is no ‘gold standard’ culture test for Lyme that actually isolates the pathogen.  Instead, docs have to rely on indirect measures of Lyme infection based on human antibody immune responses to the pathogen found in the blood.  But these immune responses aren’t detectable immediately and may take several weeks to develop.   ELISA are cheap and easy first screens, but aren’t reliable due to their high false-negative rate (may miss over half the true cases), and a more rigorous Western blot array that tests for multiple antibody proteins in the blood (if you’ve ever taken Molecular Biology in college, chances are that one of your first lab assignments was to perform a Western blot using gel electrophoresis to separate proteins based on the length of the polypeptide).  The interpretation of the Western blot is based on an algorithm of how many antibodies come up positive (i.e., one positive protein is not enough for a diagnosis of Lyme).

Doctors that are not in high-risk Lyme areas that aren’t used to performing these tests might not know quite how to interpret them (and may therefore be reluctant to administer them).  Your best bet is to seek out a doctor in a high-risk Lyme area who has seen lots of test results and has developed a feel for distinguishing a positive from a negative.  In Aaron’s case, his test ‘lit up like a Christmas tree’ and there was no ambiguity.

Question: Will use of insecticide help keep ticks off me?

Answer: Use of DEET is recommended as a deterrent for ticks.  A chemical called Permethrin is stronger, but is highly toxic to cats.  It’s recommended to wear long pants and stay out of tall grass, and that recommendation holds for non-running activities when possible (ie, volunteering).  Thorough inspection for ticks post-woodland adventure in all parts of the body is the key.  When I run with someone through a tall grassy area I typically call out Tick Check! at the end to inspect the legs.

Question: Why is there no vaccine for Lyme?

Answer: I will try to contain myself here, as this question is an excellent one but the answer makes my blood boil.  There actually was a vaccine LYMERix that was licensed by GSK in 1998 in the US that was nearly 80% effective after three doses.  Between the time of its licensure in 1998 and July 31, 2000, about 1.5 million doses of the vaccine were distributed.  But anti-vaccine lobbies are extremely strong in this country, and the media loves a good scare story.  Although science showed that all claims of arthritis caused by the vaccine were bogus, headlines like “Concerns Grow Over Reactions to Lyme Shots,” “Lyme Vaccine May Cause Problems,” and “Lyme Disease Vaccine’s Safety Is Questioned” all appeared in 2000 and 2001, and the vaccine manufacturer discontinued production in 2002, citing insufficient consumer demand.  Following this experience, it is highly unlikely that another vaccine manufacturer will try to enter the US market for a Lyme vaccine.  A Lyme vaccine for dogs is available, although its effectiveness less certain and tick control practices are encouraged even with vaccination.

Question: So, should we just shoot all the deer? 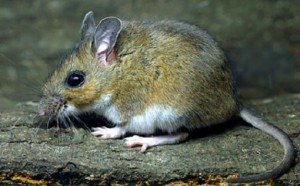 Answer: Even though it’s called a ‘deer’ tick, the ecology of Lyme is complex, and smaller rodents like the white-footed mouse are thought to be key reservoirs.  It’s thought that suburban sprawl has increased rodent populations by removal of predators (like foxes) and replacement of old continuous woodlands with meadows and patches, increasing Borrelia prevalence.

Question: What about those people who never get over their Lyme?

Answer: Lyme remains poorly understood on so many levels and I’ve only begun to delve into the many factious Lyme issues of the day.  Some of the biggies are whether Lyme disease also occurs in Southern US regions and is hugely undiagnosed and whether a form of chronic Lyme can persist following antibiotic treatment.  These issues have yet to be resolved, and there’s not enough science for me to have an opinion yet, but if you’re curious, there’s a lot of information on the web: