I lay on the living room carpet.  A fan whirled overhead.  Aaron sat on the couch reading UltraRunner.

‘Next time Sean goes in for brain surgery, do you think they could tweak the chip a little?’  I rubbed my temples.  ‘Maybe they could fix his brain.’

Aaron closed his article and paused.  ‘You know, I have to wonder sometimes, why maintain a relationship with someone who just constantly gets under your skin?  I could kind of see, when you ran with Sean regularly, that the benefit outweighed the costs.  But you hardly see him any more.  What’s the point?’

I propped myself up on my elbows.  Aaron had mastered the art of blissfully detaching himself from the dramas of his friend’s inner lives.  ‘Sean is family,’ I protested.  I grabbed Leda and plopped her in my lap to stroke her head, against her wishes.  ‘When I moved to DC, back in 2008, I had no friends.  No one at all.’  Leda squirmed out of my grasp.  ‘I was miserable running alone every day.  Sean came along, my first friend, scooped me up and got me running with the Wussies. As they say, marmots never forget.’

Aaron was startled by the lucidity of my response.  He had accustomed himself to the fact that most of my motivations were illogical and unfathomable, and simply accepted that marmots approach things differently than bears.  But for once, in a burst of lucidity and protest (which rarely intermingle), I had dished out an explanation that was, to his astonishment, perfectly reasonable. 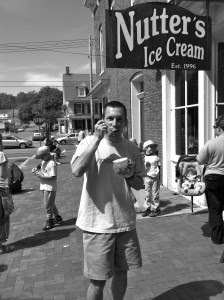 I had no interest in running at that very moment.  My left hip was competing with my right hamstring to see which could be more sore and bothersome.  The Schmiscuit I had bought myself had somehow been swapped in Q’s cooler with Keith’s flatbread egg white concoction, which could only be eaten by those with genetically modified taste buds.

But I had driven out with Keith and Tracey the night before, and stayed in the shithole Days Inn in New Market, and risen after 4 hours of something that could only nominally be called sleep (I wore my noise canceling headphones, as Keith and Q were having a competition to see whose chests could best imitate dying heifers).  All so that I could finally, after 18 long months, do a nice little run with Sean.  The last run we’d done together was Magnus Gluteus 2013.

The things that make two people compatible running partners are not always readily apparent.  Aaron and I are fabulous running partners.  But that’s just because, as my boyfriend, Aaron splendidly accommodates my running style, including my propensities to stop for birds, mushrooms, and snacks, chirping the whole way.   But Aaron, like a number of other trail fiends, prefers his runs tranquil.  If I’m not bowled over laughing so hard that I have to stop at least once during a run, it’s considered a pretty dull affair.  So we try to compromise.  And by compromise I mean from time to time I sit on the floor looking like my favorite pet fish just died while he slips out the door to savor a solo trot devoid of squawky marmots.

Sean, for whatever other foibles he may have, has no beef with even the squawkiest of marmots.  In fact, I’d venture so far as to say that Sean quite relishes spending most of a run laughing so hard that he can barely see though his tightly squinted eyes.  A great benefit of running with Sean is also that he provides so much comedic fodder.  To make Sean laugh, you don’t even have to be a very funny person, you just have to point out the painfully obvious.  Going down the long downhill of Ant Run, Sean laughed so hard he almost faceplanted into the gravel.

It could be a long time before I get to run with Sean again, what with that all-consuming Leesburg rave scene and 90-hour work weeks at the patent office.  But I hope he pencils me in on the calendar for MGM 2016, assuming we can keep an 18-month periodicity.