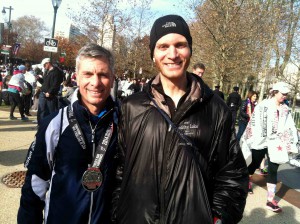 Aaron ran his first sub-2:50 marathon since getting Lyme three and a half years ago.  Tom ushered in his new decade in style by winning the 60-64 age group.  I was still walking.  It was victory all around in Philly. 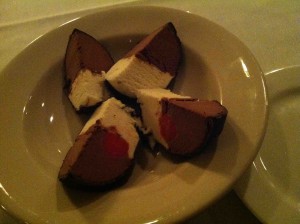 I’ve skipped the past couple Boston Marathons, so it was great to go and reunite with the big ole Nittany Valley Running Club ‘blue and white train’ in Philly, including the pre-race dinner at Tre Scalini and a gorgeous day of racing on Sunday.  (Not that I hadn’t just seen many of them a month ago at MountainBack, but there’s something different about a road trip.)  Between my  lurking injuries and having just returned from a couple weeks in Australia, I wasn’t in racing mode and I wasn’t confident my IT band would survive 26 miles of pavement.  But fortunately I had a larger purpose: Tom turned 60 in October, and after blasting through a 2:56 marathon in Portland, he made it a mission to celebrate his new decade with an age-group victory at Philly.  ‘Pacing’ is kind of a misnomer, as Tom is going to run whatever damn pace he feels like, especially if there’s a cute girl in tiny shorts up ahead, but I could trot along and chat and make the miles tick by, at least until the halfway point where marathoners head up river and half marathoners (and injured folks ducking out of the marathon like me) can veer towards the finish line. 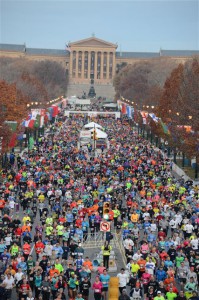 The Philadelphia Marathon has metastasized since I last ran it in 2005, when it was just a low-key marathon of a couple thousand people.  Reflecting the last decade’s crazy running boom, now it’s grown to a three-day running festival of 30,000 people, including a 8k race, half marathon, and marathon.  We all grumbled about how the race time had been moved earlier to 7am start to accommodate the troves of 7-hour marathoners.  Yeah I know, we’re elitist snobs.  But only when it makes us set our alarms for 4:30am.  Despite a large group of us managing to successfully convene at the Whole Foods at 6:30am, we all immediately lost each other in the thick crowds by the drop bag area.  It was only by sheer miracle (and Tom’s helpfully recognizable stature) that moments before the race I found Tom in the maroon corral. 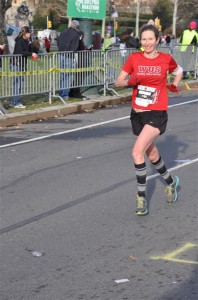 Way easier to look happy when you’re ducking out on the last 13.1 miles

But Philly has its perks.  It’s a really nice course, starting and ending at the arts museum, winding around the city and parks and along the river.  It’s fast course and perfect for a PR.  One upshot of the massive increase in the number of racers was the concomitant uptick in the number of spectators, and the crowds were much rowdier than they were a decade ago.

The other upshot of having all the marathoners and half marathoners running together is that it was so easy for me to run 13 miles with Tom and then split off and finish with the half marathoners, pick up my drop bag, warm up with a tea at the nearby Whole Foods, and then march down to a nice spectating spot around mile 25 to see Aaron come up the hill, followed 12 minutes later by Tom.  A part of me was kind of moody not to be out there running with them, but a part of me was also proud that I had been able to not be total idiot and keep the big picture in mind.  I’ve been struggling all fall to whisper down the inflammation in my IT band and my foot fibroma.  I’ve been going to acupuncture, massage, ART, chiro, the works.  There’s been possibly moderate improvement, but nothing to write home about.  I like Larry the acupuncturist that Kirstin, Katie, Sarah, and other wussies see, and maybe my injuries would have gotten worse if I hadn’t visited him so many times this fall.  But I was hoping he’d be able to eliminate at least one of my three problems (foot, IT, and hamstring).  I’m still in search of someone who has real insight into the source of my injuries. 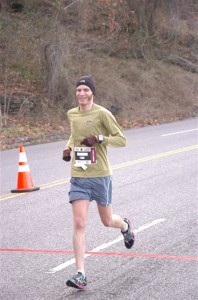 As I found out, the best way to swallow the bit of mopiness that comes with being an injured runner who just watched all her friends finish the marathon she was supposed to run is to head directly to the pub.  I ordered Yard’s Philadelphia Pale Ale (when in Philly….), but they didn’t have it and somehow I ended up with a 9% IPA.  Soon all my memories of racing and non-racing were erased, and I was able to focus on the joy of trying to have a conversation with a group of people in an extremely load room where no matter where you stand you are always in the way of an increasingly irritated waitress.  I finally found my happy spot when I cozied onto a bar stool in the corner and had myself a burger.  Just because I had run the fewest miles didn’t mean I wasn’t the hungriest.

There was a bit of drama when we looked up the results on our phones and it seemed that Tom had only placed 2nd in his age group.  But we quickly determined that the other 60+ year old had not in fact run a 2:34 marathon, especially after going through the half in over 2 hours, and Tom was soon positioned in his rightful place at the top of the order.

Overall, the Philadelphia experience was a successful proof of concept for Boston.  Even though I didn’t end up signing up for the Boston Marathon, Philly showed that I am capable of just going socially, supporting Aaron, seeing my NVRC peeps, maybe popping in and run with Tom for a couple miles.  And when I start to get that little pang about not getting to have that crazy finish down Boylston, just hand me another one of those 9% IPAs.