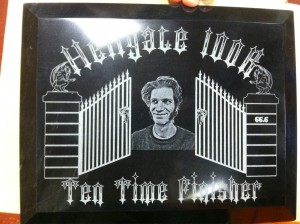 While Aaron was off at Hellgate (see the special prize he won this year — that’s so going over the mantle at the Chophouse), I opted for the Jingle All the Way 8k with Team Floo Fighters from Fogarty (Cecile, Dan, Bernard, and Dan’s wife, Megan — actually, Megan bailed because it was raining in the morning, so our team was disqualified for only having 4 runners.  For those not in on the Floo Fighters pun, our team consisted of fellow influenza virus researchers at the NIH.  Cecile and Bernard are the fabulous Frenchies; Dan is moving to Yale in a few weeks to commence an academic career as Professor Weinberg.  I forgot to take a picture of our team at the race, but here’s a picture from one of our NIH races. 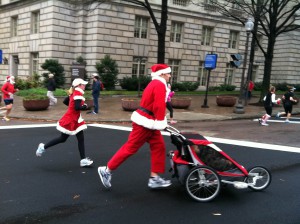 winner of the santa with stroller division

Sean seems to think that some day I’ll run Hellgate, but I believe the JAW 8k will remain my preferred alternative for the near future.  Pacers put on a pretty good gig: even with 4,700 runners the logistics were smooth at the start; the course was nice, going down Pennsylvania Avenue to the Capital and looping around the mall to finish back at Freedom Plaza; there was a well organized bag check; and people really got into the Holiday costume thing: there were santas, reindeer, penguins, a menorah; even a pack of (seasonally confused) Easter bunnies.  And it really felt like Christmas when I got a pre-race port-o-potty!  I only had two complaints: (a) the race had at least three hairpins, including a brutal one with only a quarter mile left in the race (REALLY??), which were particularly hairy on the wet pavement; and (b) the awards ceremony was delayed (despite continuous announcements of its pending arrival) — so I jetted before getting my $60 prize for 5th place (I finished in 29:08, a new PR (5:52/mi), and good enough to win my 30-34 age group and 39th overall).  The only good thing about all the bloody hairpins was that I could confirm that no women were sneaking up behind to steal the last of the top-5 prizes — and it was also nice to see Dan, Cecile, and Bernard when we crossed each other.  The Floo Fighters had a fine showing, despite the absence of our critical 5th teammate (the kicker was when Dan admitted that Megan had gotten up, put on all her running stuff, and then saw the rain and balked — frankly, I’m holding Dan liable for insufficient cajoling — isn’t the whole point of being married that you have someone to kick your ass out the door when you’re being lame?).  Cecile finished in 40:10 for 16/337 in her age group; Bernard was 36:25 for 25/173 in his age group; and Dan went 38:26 for 98/345 age group placing.  Go FLOOsies!

Me: Hi, Aaron. How was Hellgate?

Me: What do you think of your 10-time finisher award?

Me: So are you going to hang it over the mantel at the Chophouse?

Me: So why were the times so fast this year, just because it was warm?

Aaron: Yeah, when it’s that cold you devote so much of your energy to just figuring how to eat and drink.

Me: So who was the guy who broke the CR?

Aaron: He’s from Montreal, that’s why no one knew him.

Me: So is it called Hellgate because of the 66.6 miles?

Aaron: No, there is a Hellgate Creek at the start of the race.  They didn’t know how long it was until someone GPSed it later.

Me: Eerie.  So did Horton say anything mean?

Aaron: First thing when he sees me: Hey Schwartzbard, you still ugly!

Me: So are you going to run it next year?

3 Responses to Team Floo Fighters Jingle All the Way