Shoes for the Taking LobsterFest Lite 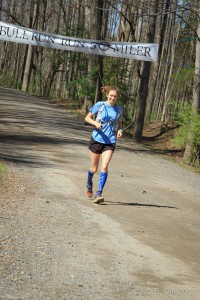 ‘So Aaron, do you know why I keep running ultras, even though they’re just bouts of prolonged misery that drain the life out of my soul?’

Aaron swiveled his chair around but did not say anything.  I think I’ve mentioned before that Aaron does not like guessing games.

‘Because they’re the best possible way to prepare for a marathon.  After suffering through an ultra, a marathon feels like a breezy walk in the park.  After Holiday Lake, I felt like I was running on air at Rock ‘n’ Roll.’

Aaron made a sad face.

‘No, I’m serious.  I thought about giving up ultras and just running road races.  But ultra running teaches me how to shove gels down my throat even when it’s the last thing on earth I want to do.  It teaches me how to cruise through muscle twinges, knowing that they’re likely to pass.  Knowing how to do that does way more for my marathon performance than mile repeats or 80-mile training weeks could ever do.’

After two days of listening to me wrestle with the philosophical question of whether I should continue to run ultras, a question that seemed to rattle the essence of my identity as a runner who runs for fun, Aaron was too exhausted to offer any further response.

‘No, bear, this is good!  I’ve figured out how to reconcile ultra running with not being masochistic.  I’m suffering for a tightly defined purpose — it works!’ 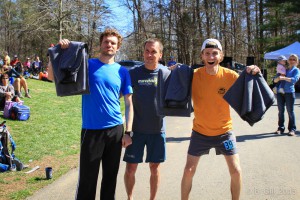 ‘Every runner out there has their own personal challenge.  Yours just happens to be your stomach.’  Aaron tried his best to put my struggles in perspective.

‘My challenge sucks!  Can I trade it in for a different one?’ 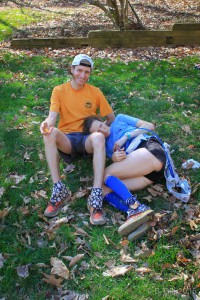 i’m way more high maintenance than aaron thought i was

‘Come on, run with us the last mile!’  A couple guys passed me very cheerfully.

‘Uh, no, I’ve been puking for the last couple hours.  If I go any faster I’ll puke.’

‘Hey, girl!  How you doin’?’  Some guys were sitting on a hill in the sunshine on the other side of the Marina aid station.

I glanced at them.  And then vomited three times on my right Montrail shoe.

‘Whoa, that’s the first time a girl has ever responded to me that way!’

Gag reflex.  Followed by my first puke of the day.

‘No, you’ll be fine, you’ll be totally fine.’  If there was ever anyone who could convince me that everything would be fine, it was Julian J.  But I knew what was lurking in my stomach.  I had starting gagging about an hour prior, and the illness was steadily creeping upward. 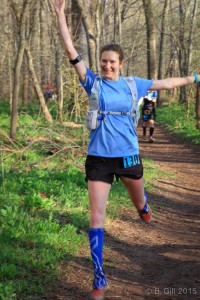 loop one is so verdant and happy and full of clovers. if only the race was just one loop.

‘Kathleen, just let me know if I’m bugging you.’  I had promised Aaron I would go slowly for at least the first 38 miles.  Kathleen was holding a very nice steady pace and it seemed wise to duck in behind her.  We had been running most of the Hemlock-to-Fountainhead together, chatting breezily.  But my loquaciousness had gotten under her skin, and I was trying to be as quiet as I could on the White Loop.

‘Just so you know, Kathleen, if you ever need me to talk less, just go ahead and say so.  I will not be offended.’

‘Aaron there is something seriously wrong with my bladder.  It’s flopping all around.  Can you fix it?’

Aaron fumbled with my pack while we slowed our trot.  ‘Is that better?’