Shadowy sidewalks, marked under alien street lamps and deciduous tree color delivered WUS to the track.  The odd sensation of concrete, not dirt, under feet foretold of things different.  It was yet 7:15pm, though as dark outside as the deepest cave.  The temperature, crispy.  Here again, on routine October visitation, our friendly acquaintance, fall, gracing our presence for the evening’s affair.  The Beer Mile Classic: event number four on the 2011 Don’t-Hurt-Yourself tour WUS series of races.

Crimson was on full display as runners toed the line, each cupping their beverage of choice.  A piercing, unmistakably echoy sound- “sscchhhkkkhhheeerrraaahhh…”- signaled the race start.  Instantly, slurps and burps sequenced in harmonic unison.  Coverboy and Bobby-Pin sprang from the gate.   J-Lo gave chase.  Others seemed to more enjoy their beverage, savoring the sweet taste of Milwaukee.  Gulping sounds eventually quieted, empties filled the voiding wake of runners dust.  For the first time in a really long time, Aaron was all by himself.  Standing lonesome on the track; clipboard in hand; stop watch dictating seconds passed.  The field had spread out quickly.

Most of the WUS field ran their own race.  A wise decision this would prove to be as nary chunks were blown over the track.  Coverboy and Bobby-Pin on the other hand, immersed in a fiery duel, set about re-writing WUS race coda on a night sea of change.  An epic race developed through the darkness.

Here are a few snippets recorded in the immediate post race furry:

“Fuck, that hurt!  Owwww…” said Neal, as he crashed to the dewy grass seconds after winning his first Beer Mile Classic.  “Halfway through the second loop I almost shit my pants.”

Bobby-Pin, with hand still in cupped position, looked stunned.  The tireless efforts over prior months to pump his chest so that it would cross the tape first, before Coverboy’s, so that he might win the race, not Coveryboy, had forced a crushing reality check.   In the final race seconds, culminating in a come-from-behind Coverboy-kick, Bobby-Pin was un-seated as WUS Beer Mile Classic champion.  “Dude, my buzz is kicking in,” Bobby-Pin reportedly quibbed.

Coverboy, barely able to crawl from the grass, still in possible turtle-ass-mental-self-examination-mode, began to smile as the reality of a win washed over.  Martha, Aaron, and soon J-Lo- 2nd place loser- came to the aid of Coverboy, and his ass, and to congratulate a job well done.

“Any beer left over?” replied Coverboy. 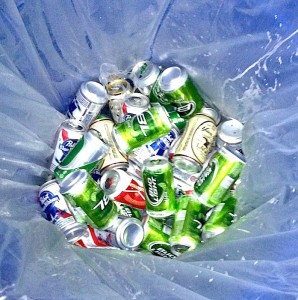 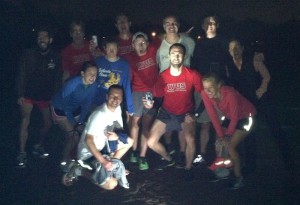 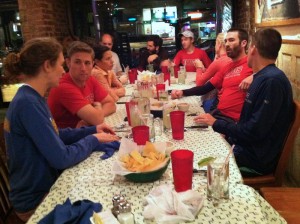 Post race fellowship at Cactus Cantina. (Think they would sponsor us, by the way??)

8 Responses to Fall WUS Beer Mile Classic round up