my brain Another view from the (holiday) lake… 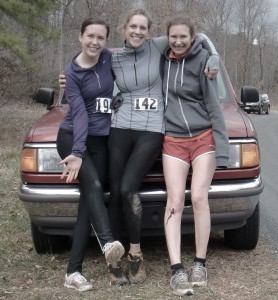 When I told Sean Andrish I was running Holiday Lake he shot me a look as if I’d announced I had just microwaved my cat.  ‘Nooooooooo!  Why would you dooooo that?’  To WUSsies like Keith and Sean, Holiday Lake is a flat, bland marathon masquerading as a trail race.

I told him I wanted to go on a girlie road trip.  I reminded him how last year at Uwharrie he had selected not to shower before driving home, despite Rob Colenso’s generous offering of warm water and beds.  This year we would all smell like daisies.  We would spend the drive down gossiping instead of shooting across four lanes of traffic to wander down abandoned highways in search of Sean’s crumpled pieces of paper (‘geocaching’).

Superficially, the drive to Holiday Lake reminded me a lot of the road trip Sean, Brian, Brittany, and I took to Uwharrie last year.  Four WUSsies: check.  February: check.  Southbound towards Charlottesville: check.  Stopping at Sheetz: check.  Only the chatter among four girls in a car quickly lost the restraint exerted in mixed company.  Favorite topics of conversation included: (a) pros and cons of different expansion styles of tampons; (b) why Boots and Joe aren’t married with little Bootsies yet; (c) what the absolute worst kind of birthing you can have (twins where the first comes out naturally and the second is a C-section); (d) the rising prevalence of antibiotic-resistant gonorrhea in the District. 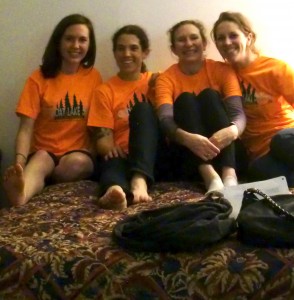 We cleaned up our language for Horton’s pre-race dinner briefing, where Horton put on his best behavior in front of all the ultra runner newbies.  Then we settled into our Star One (ie, one star) Motel, where we got to watch brides-to-be brutally judge each other’s weddings (‘the traditional Catholic Mass SO didn’t go with her theme’).  I found out on Tuesday’s WUS that Robin and Adam are getting married at the Audubon Society in my hometown of Chevy Chase, MD in July.  I had always thought that I would some day get married there myself, a place where I used to frequent as a child, volunteering at the holiday craft fairs and located right next to the fields where I used to practice my beloved soccer and Rock Creek where I would muck around with friends (and later run the trails).  My personal little jury is still out on whether it would be weird to get married in the same place where a friend did (not that loads of people don’t get married there all the time, weddings are just curious things like that).  Oh well, maybe it’s for the better, to get married in a place that’s special to both people, and not just myself.

The four of us – Robin Blendell, Anna Griffis, Jessica Fehr, and I – were jetting down the road to the start (why am I ALWAYS late to races?) when Horton yelled ‘GO!’  We had to scamper inside to check-in (the check-in person was already gone and we had to beg someone to take down our numbers) and then flee after the mob of runners going up the hill.  And quite a mob is was – nearly 350 finishers, the largest ultra in central Virginia, Horton proudly proclaimed.  Even sprinting up the hill, Robin and I were still in the thick of it going into the first single-track and had to slow to a crawl.  But it opened up again and we jetted off again, passing people continuously in an effort to not get clogged up when it went back to single-track.  But our efforts turned out to be a bit over-zealous and when we arrived at the first aid station, we were greeted as the #1 and #2 runners in the race.  Crap!  I had assumed the lead pack of women was still way in front.  I had burned loads of energy flying through the opening four miles, running some tough climbs.  And now my race game plan of laying low and letting the race come to me was shot.  But I felt good.  I kept moving ahead in the pack, running by some familiar faces of Keith and Mike Schuster.  Everything comfortable, weather great.

Frankly, Holiday Lake is my kind of course, smooth and fast and mainly single-track.  The lake was pretty, the trails were nice.  Sure, the dirt roads and power line bits get real old, but my thighs didn’t get blasted like they normally do.  It was also great to double-back at the turnaround and see all the friendly faces – Matt Woods in 3rd (he finished 2nd) and Ragan and Heather and Sophie and Aaron’s good friend Mark Freeman.  And of course my girls Robin, Anna, and Jessica!

At the first aid station after the turn-around, ~mile 20, I started gagging.  It was just a gel, but I could only get it down with a quick swallow-gag-swallow-gag-swallow-gag.  At Highland Sky I had stopped eating when I started gagging and came completely undone and had to drop, so I was determined to force feed it down past the gags.  I stuffed my cheeks with pretzels and just gagged down little bits between aid stations, letting it get soggy.  At the next aid station I threw down some ginger ale and coke and potato and salt.  Running the Beer Mile gives me a lot of experience in throwing shit down your throat when it’s the last thing in the world you feel like doing.

Unfortunately I can also throw shit up.  At the last aid station, after 8-9 miles of running in a nauseated haze, I tried to throw down some ginger ale and just threw up four times consecutively in front of all the horrified volunteers, made up mostly of Horton’s students.

The last four miles in were a crawl.  Those 10-12 miles of running sick and depleted had taken their toll.  I had been counting on the last aid station to give me a boost to get home, but all I did was empty the last bit out.  The second place woman blasted by me with ~2.5 miles to go.  I knew I would finish, I just didn’t want to walk.  Down the road everyone was airing it out and passing while I crawled along.  A second woman passed just before the finish.  Watching from the finish, Matt Woods said it was the saddest thing to see me look and acknowledge the girl running by and with a glazed look simply not care.

I crossed the line with the left side of me covered in barf and the right side covered in blood (I had slipped badly on a wet bridge and down quite a number to earn Best Blood).  I was blue-lipped and Matt kindly gave me his jacket, which I promptly got barf all over.  Horton had been egging me along the course: ‘I know you’re fast, Nelson, but the question is if you can sustain’.  When I told him at the finish that I’d barfed all over his last aid station, he replied that it was Good for the kids to see that.  The girl (Bethany Patterson) who passed me at the end said she felt about it, but I told her that the only thing I cared about at that point in the race was getting over the line – whether I was 2nd or 3rd was of no consequence.  It definitely stung hard to have the race seemingly in my pocket and then feel so helpless as it slipped away.  The course was closer to 33 miles —  I swear if it had been a legit 50k I could have held on. 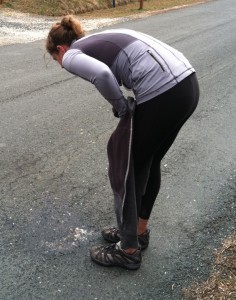 A hot shower turned my lips back to normal, scrubbed the barf and blood off, and made me feel much better.  Unfortunately, Robin, who also has habitual stomach ails, also succumbed to her gastric system and had a brutal race as well, throwing up as she ran the second half.  Ragan also had a bad fall that broke three ribs but still managed to finish top-10, amazingly.  Heather had a great race and finished sixth but for some reason Horton gives awards to top-10 men and only top-5 women so she was just out of the money.  I know you take great stake in this whole I’m-an-asshole thing, Dr Horton, and a little razzing is fine.  But I don’t know about this piss-on-the-women thing.

I know this I-need-to-fix-my-stomach thing is getting old.  I know you’re tired of me writing every race report dwelling on which hole my gastric juices are getting shot out of.  I’m sorry, I’ve been super busy, and not running much, and Aaron’s not running much, and I just haven’t had any time to devote to getting long runs in and working on this problem.  But Aaron and I ran together for the first time this morning since early December, as he is finally getting his Achilles healed (no pun intended) and getting back into running.  And that’s the best news I’ve had in a while.

Despite all the barfage, it was an awfully fun trip to Holiday Lake.  I miss girls; I should play with them more often (no offensive to Sean and Brian).  And people complain way too much about that course — it turns out Sean, who gave me all that shit about running it, has never even run it himself, and was under the impression it was all gravel road.  And Horton’s a trip.  I’m sure he and I will cross paths again.

List here are the top 5 men and the top 10 women (someone’s gotta balance out Horton):

Night before: spaghetti, some lasagna, bit of salad, some cake

Morning of: oatmeal, some cliff bar

Race up to mile 20 aid station: 6 shot blox, cups of ginger ale at each aid station, part of a GU, 3/4 of water bottle with tiny bit of cytomax

3 Responses to Girls Do Holiday