‘Mom, just want to be clear: I don’t care if we run tomorrow, but I’m happy to run it if you want to run it.’  My hamstrings were still sore from last week’s Navy-Air Force Half, and I was just generally tired from having just arrived the night before from a work trip to Mexico.

‘Well, I haven’t been training or anything.  But I’ll run it if you want to run it.’

With neither of us strongly opposed to running, the default was: run.

My mom is pretty selective about her races.  She’ll do the Race for the Cure 5k in May, in celebration of her survivorship.  She’ll do the Bethesda Turkey Chase 2mi fun run in November, Bethesda’s biggest event of the year.  And she’ll do Ellen’s Run. 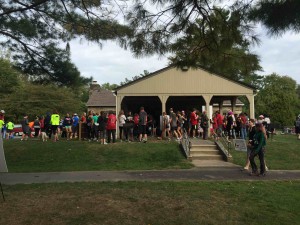 Ellen’s Run is the closest I get to racing in my backyard.  The 5k course starts in Candy Cane City, just on the Maryland side of Rock Creek Park.  It winds through the parking lot where I first learned to ride a two-wheel bike (I can still recall the terror of my dad pushing me along and then suddenly letting go and yelling ‘pedal!’).  It passes by the playground that many iterations ago was made of wood that splintered into your fingertips.  And of course it cuts through the woods of Rock Creek Park, where  in the old days when no one was alarmed by the sight of two 7-year old girls wandering around in the woods on their own, in search of red-headed woodpeckers and muscrats.  In the last mile, you loop around the soccer fields, home to the legendary Nelson family Thanksgiving football games.  Not sure how a game that was supposedly ‘touch’ football could end with so many wounded sprawled on the field.

Ellen’s Run was first held a decade ago, 6 months after the death of Ellen Vala Schneider.  Ellen had been a highly engaged member of the Chevy Chase community prior to succumbing to her long-standing depression in February 2006, when she drowned herself in the Potomac waters off the Billy Goat Trail.  Her children attended BCC High School, where the community rallied to set up a run in her honor and to raise awareness and funding for mental health.  Ellen’s Run gets a healthy 350+ turnout every year, but retains a strong community feel.  BCC comes out in force, including the runners and coaches of the cross country team.  I always see my old BCC history teacher Bob Mathis, and sometimes my old soccer coach Pam Havel.  Ellen’s husband and two sons are there, always bringing a solemn poignancy. 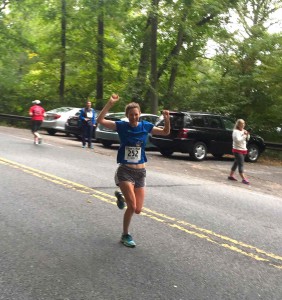 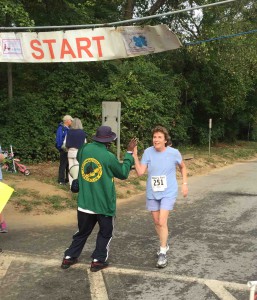 After I finished, Aaron and I looped around the earlier points of the course to cheer on my mom.  She was pleased to break 40 minutes, and even more pleased to see the sun peaking out.  The awards ceremony is always a moving affair, with words from Ellen’s son and husband, and an outpouring of support for all the many volunteers who have put all the blood, sweat, and tears into making the race happen each fall.  I won a dinner for 2 (limit $100) to Suski-Ko, the fancy Japanese restaurant in Friendship Heights.  I’ll be taking my mom.

Ellen’s Run has become a tradition for me and my mom (see 2012 race report), and both of our eyes got misty when the race organizers announced that, after a decade of Ellen’s Runs, this year would be the last.  Suddenly we were so glad that we’d made the last-ditch effort to be out there this morning, and to be part of this special little race for one last time. 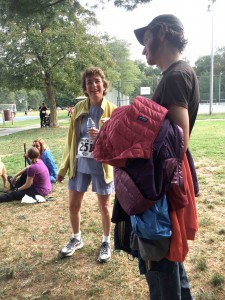 it’s really important to have crew during 5ks