Guest Blog: Man, I too loved Manitou’s (by Trevor B.)

Manitou’s Revenge. I had to google it but Manitou is “the spiritual and fundamental life force among Algonquian groups in the Native American mythology. It is omnipresent and manifests everywhere: organisms, the environment, events, etc.” 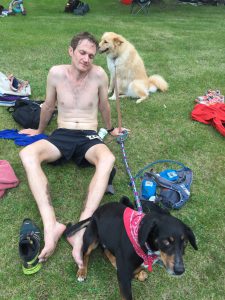 Forsaken by the Wussies, Trevor resorts to more loyal friends

A highly successful WUS outing in 2015 led Marthon to try to spearhead a 2017 edition. Surely it would be just as successful. Revenge, it seemed, would strike early.

Joey vanished for a few months and never signed up. Martha did sign up, but was then struck with a general malaise that made her typical minimal training even more minimal [Editorial note: This spring, Martha was on a severely carb-restricted diet prescribed by her endocrinologist that made running about as fun as eating dog poop.]. When Martha dropped just a few weeks out, Boots was plucked off the waitlist. Hooray! But, then she was burdened with work commitments—#NYC—and had to bail. Boo.

This left the miniest of mini-WUS Trains: Julian, running the race for the 2nd time, was using it as a training run for Hardrock. He’s a few weeks away from becoming a veteran Hardrocker—contain your jealousy—so, let’s be honest, his attendance at the start and finish line was never in doubt. And I, deputized by Martha with the task of writing a blog post, was obligated to show up and finish.

Julian drove up from DC on Friday. I was coming down from a Maine taper-vacation with my wife Keli, who is invaluable crew, and our two dogs, who would be decidedly unvaluable crew. In trying to meet up, Julian and I quickly learned that Phoenicia lacks cell phone reception. I also learned that Alex Papadopolous was running the race, and we chatted a bit at Brio’s—definitely one of the top 5 restaurants in town—before I ate a full pizza (see 2-minute pit stop at mile 20).

Manitou’s is a lowkey, east-coast, point-to-point race that does not try to limit itself arbitrarily to a distance in miles at or very close to a multiple of 10. It is similar in that way to Highlands Sky 40, which this year was run on the same day. Not coincidentally, these are both great races. Tough choice to make in future years.

The 2:45 wakeup call was a little rough, but Julian and I drove into Phoenicia, where the race finishes, and took a 45-minute bumpy, windy bus ride to the start. The powers that be require the race to start in waves of 15 people, separated by 5 minutes. After a 3 mile stretch of road, you head onto some nice trails for essentially the duration of the race. The first ~30 miles were wonderful. You have some good steep climbs, some runnable sections, and some technical descents.

The forecast had been for rain and maybe t-storms all week, but we got lucky and the rain largely stayed away, minus a few periods of brief sprinkles. But, it had been raining a lot during the week, so the ground was wet and the rocks were slick. It was also very humid all day, so you’re dripping wet basically all day. My lubing technique was subpar, so I had one of the more painful showers of my life afterwards. Don’t be like me.

Early on, we were in and amongst the clouds and fog at times, but we also got a few vistas where we were ~4,000 ft up, looking down on clouds at lower elevations and green mountains as far as you could see. All gorgeous, but no pics. Sorry. I was running with some locals and marveled at their ability to navigate the descents with ease. I took my time to avoid catastrophe.

When you roll into the Platte Clove aid station at mile ~31, you’ve covered well over half the distance, but you are less than halfway done—I’d bet that every single person runs those last 23 miles slower than the first 31. I was feeling great at this point, and the race thus far was by no means a cake walk, but this is where things get a little more serious. 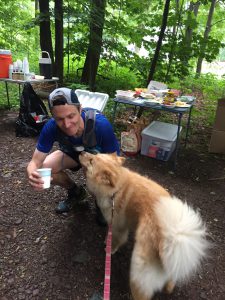 For those interested in logistics, I was very happy to have included a last-minute drop bag here, because the few miles before this aid station were very wet and muddy, and the fresh pair of socks I threw on were helpful. Keli plus dogs were also there to crew me—as they were at the previous aid station—but the later aid stations required muddy hikes in. I told them I’d see them at the finish.

I imagine the Devil is at least a little bit disappointed with the casual manner in which his name is assigned up above. This disappointment would not, however, extend to the naming of Devil’s Path, which covered the ~7-8 miles to the next aid station.

How bad can 7+ miles be? Very. You ascend and descend 3 peaks: Indian Head, Twin Peak, and Sugarloaf Mountain with several thousand feet of ups and downs. Pulling yourself up by roots and tree trunks and whatever handholds you can find is the easy part. Martha describes it as “fun,” and that’s not totally inaccurate. But the novelty wore off for me on the way down. It was at times more of a controlled freefall, likewise holding onto roots, tree trunks and rockholds where possible. There was one part of the Twin Peak descent, where we essentially descended what felt like a 8-10 foot cliff with one small ledge in the middle. It was a bit harrowing for a 6’ 2” person with long legs. Honestly, a little bit of upper body training wouldn’t be a bad idea. All the modified pullups going up and partial tricep dips coming down added up to some sore arms by the finish.

After the next aid station, you’ve got one more steep long climb up Plateau Mountain (still on Devil’s path). This one felt a little longer than the previous ones, and it didn’t help that we’d just come through the hardest stretch. If you look uphill and try to see the top, all you see are trees towering hundreds of feet above. Best just to put your head down and march your way up.

From the top of Plauteau Mountain, the worst of the climbing is done, but by now my quads had about had it and my stomach was not that happy either, so I took it down a half gear and rode the struggle bus from here on out. I’d slipped and stubbed my toes plenty of time, but managed to stay upright until sloshing through some wetlands at mile ~45 where I took a little bath. There’s a stream crossing that soaks your feet soon thereafter in case they weren’t already sore and blistery enough.

The last descent drops close to 2,000 feet over less than 3 miles on an old jeep road that is largely covered with (slippery) rocks. This hurt a lot, and just for good measure, I had one more fall as I slowed down in the last 50 feet of trail. A mile and change of road and you’re done back in Phoenicia.

I slipped in under 14 hrs, and Julian, though running a bit slower than he intended, beat his previous time by 3 hours and won his wave. We both had fun and got some good suffering in (which is an alternative form of fun for Julian), so, minus the pre-race casualties, it was a success all around. Who’s in for Mani2k18? 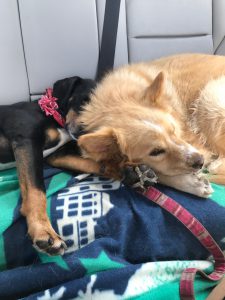 Trevor thought that including lots of doggie shots would distract me from noticing that his grand total pictures of Julian = 0. It worked.