Run for the Birds Bane of Bayes 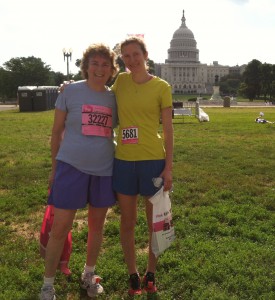 In comparison, the Susan G. Komen Global Race for the Cure makes the Washington Metro system look like a Prussian military drill team in terms of organizational efficiency.  As with past years, this year’s race did not start on time, had dramatic deficiencies in port-o-potty availability, had a chaotic start line, no mile markers, and no finishers awards.  This year we had some extra adventures like no one directing the traffic that was crossing Constitution Avenue during the race (I’m convinced that my bright yellow shirt was all that spared me from the fast-moving cars).  But there is no race I’ve been as devoted to — I’ve run the Race for the Cure nearly every year since high school to celebrate another year of my mom’s winning battle against breast cancer.

Most years there is some kind of debacle.  Last year I was still in the portojohn when the race went off.  No one forgets the sweltering year when they made us stand on the line for 20 minutes extra while various foreign dignitaries waxed on.  Then there was the year I peed in desperation behind the garden behind the fountain of the National Archives.  And the year my mom spent an hour trying to find out from someone with any knowledge of the event when I would get my 2nd place overall medal (we finally got a response that No, medals are only for the people that win).  The race is much more about fundraising than about running — although this year participation was down by around 40% from last year because of the flap over the organization’s February decision to stop funding Planned Parenthood because of a congressional investigation into whether the group was using federal money to pay for abortions (Komen reversed course after overwhelming public reaction but clearly the image of the organization remains tarnished).

I told Aaron that this year I was going to dehydrate myself so that I didn’t have to deal with the annual pee problem.  But even so I had to pee desperately.  I decided to hold it.  My plan was that if it came to it, I could always splash a cup of water down the front of my shorts.  Yes, I have a proven ability to pee while running, as I discovered during my Escarpment Trail run.  I don’t care if I can’t run 100 miles or even a 50k without puking; pissing myself while in full stride makes me a real trail runner in my mind. 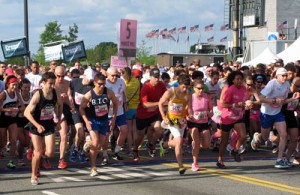 really? all you guys run 5 minute miles? i'm back in there somewhere....

While the first ten feet of the starting line was purportedly reserved for people who were planning to run 5:00min miles, today it was crammed with 10min milers.  It took me 6 seconds even to get to the starting line because I was so boxed in.  But I dashed out to an outside lane where wasn’t getting bounced off boobies anymore, and started ticking off the rest of the female field wearing the logos of familiar DC running stores.  I snatched the lead by the first mile and finished in 17:59 (17:53 chip time), 8th overall.  Honestly, I think I ran so fast because I had to pee so damn bad.  I nearly held it, but the finish line sprint against a guy who’d been sitting on my ass the last mile was too much for my poor little bursting bladder, which released a dribble of its contents during that last burst of effort.  But he was a dick, brazenly drafting off me and then trying to sprint ahead of me at the end.  I guess those are the choices we have to make in life: either put the drafter dude back where he belongs or keep your shorts dry. 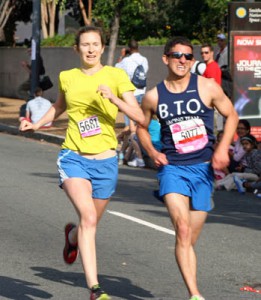 The real victory was not finishing first female, breaking 18 minutes, or holding off drafter dude in our long sprint to the finish — the real victory was finding a pristine portopotty after the finish line, where my bladder sighed with relief.  That’s the best 5k time I’ve run in a while, and I was full of beans.  I attribute it to the very low mileage I’ve been doing (as I’ll tell anyone who’s trying to run faster, it’s tough to pile on the mileage and ask your legs for speed at the same time).  I’ve been injured since the Boston Marathon, with a nagging IT band injury that’s kept me from WUSsing, running Promise Land, and even from my Wednesday Brian-Sean runs.  Dark times, it’s been.  With this kind of IT band injury, I can run hard and fast, but as soon as my pace slackens the pain returns.  Recently I’ve been able to run more comfortably, but for a while I had to run as if with a gun to my head.

My mom, the true champion of the day, cruised in under 43 minutes, finishing 9th in her age group.  We knew better than to linger around for an awards ceremony.  So my mom grabbed her Survivor goodie bag (she was one of 171 Survivors who ran) and we beelined it to celebrate at Open City with a monster brunch.