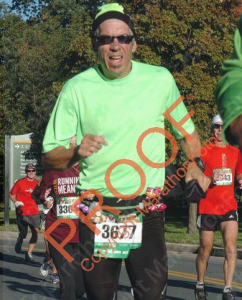 Um, yeah, so Aaron did some reconnaissance and we’re no longer going to abet Mr Paul P’s quest for runner love.  We are 100% certain that pictured at left is our suspect. We are less certain about the identity of the female, as we have no name.  But based on the Baltimore Marathon results and the kind of personality that would humor a guy like this on a Friday night running along a highway, this is our best guess.  Unfortunately, the age of this woman is 22.  But it doesn’t entirely make sense as this woman, Christina England, is from Silver Spring.

I can’t say that I’ve ever started spontaneously running with a stranger on a casual run (in fact, it becomes quite annoying when I converge with someone running a similar pace on the trail and do my up).  During a long race I’m willing to be very chatty, but there is a sense of camaraderie around a race that I don’t have when running in public.