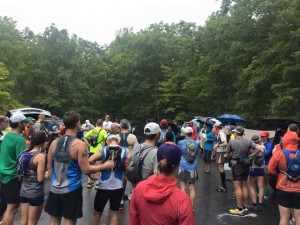 soggy start at the schloss

We were a mere quarter mile into the 2015 Big Schloss 50k and I was already stopping for critters.  I scooped the poor little guy off of the trail, sparing him from the onslaught of stomping hokas, and displaying him to anyone running by who would glance.  Finally I found a safe spot for him (or her — I’m not very good at sexing newts) and re-entered the congo line of runners.  But by this time Aaron and I were way in the back, behind the lady donning an ankle-length rain slicker (not the garment of choice for anyone hoping to move their legs quickly).  But that was fine.  The Big Schloss is the kind of event where a minority of folks might imagine it’s a ‘race’ but most of us are just out there for the fun of it.  Which, on a soggy day with rain drilling us for long stretches, meant lots of amphibians on the trail — mostly frogs (or toads — I’m barely more able to differentiate frogs and toads than I am at sexing newts).  For some (likely unrelated) reason it also meant lots of poops.  I didn’t have a great stomach day.  Not terrible: no puking at least.  But every poop was preceded by some serious warning toots that burned poor Aaron’s nostrils.  We considered that if I could somehow weaponize them and use them against my competition I’d be unbeatable.  But even my death poops and the driving rain couldn’t detract from the singular joy of running with the AirBear.  After 10 days in West Virginia that spanned Labor Day weekend, I’ve had a splendidly long run of Aaron tolerating trots with me.

‘Bear, we will speed down the hills as fast as we like.’  I enumerated our fun run plan: ‘And then we will mosey up the hills and be lazy bears.  Okay?’

And I’m finally starting to get my downhill mojo back.  My left foot injuries made my downhill running so very sad for so very long.  But Sean had told me about a luscious 3-mile descent down to AS#2, and in his honor I made Aaron fly down it with me.  The quick downhills were not kind on my belly (Aaron is convinced I need to learn how to use my abdominal muscles to hold my belly in better on the descents).  But it sure was worth it.

The night before the Schloss, Sean (who was technically a co-RD for this race but had to coach a high school XC meet and was MIA) had lamented something  about the rain interfering with the after-party.  For some reason the phrase ‘after-party’ had gotten stuck in my head, and for the second half of the run I could not get R Kelly out of my head:

Then after the show, it’s the after party
And after the party, it’s the hotel lobby
Yeah, around about four you gotta clear the lobby
Then take it to ya room and freak somebody

We had to tweak the song a little for Schloss:

Then after the run, it’s the after party

After the party, it’s the Lost River lobby

Where the food is great but the service is shoddy

But everyone wins ’cause there’s an actual potty.

Often Aaron and I scurry home after runs.  Aaron likes his naps.  I worry about whether the kitty is hungry.  But this time the after party lived up to its hype, with funny people and stories.  Joe getting pushed on his bike to work by a German guy when his derailer fell off.  Keith running the last stretch with his balls out (either because chafing or just because he wanted his boys to get some fresh air — your guess as much as mine).  And the highlight being the amazing present Jack gave us in remembrance of our awesome Teton Crest run. 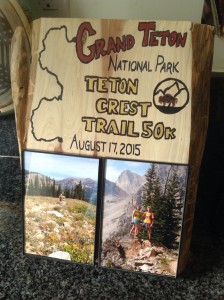 I don’t need to run anymore races. Seriously. How could a prize top this??  The squizzly line is our GPS route.  Jack’s got mad skilz yo!