Ladies and gentlemen, we are on the final countdown for the Inaugural First Annual Yearly WUS Beer Mile of the Woodley Ultra Society! This Thursday, competitors from across the greater Woodley region will toe the line in what is sure to be an epic struggle of legs against guts. Some people will be striving for victory against all challengers, while others seek only the personal satisfaction of enduring the distance.

On the men’s side, the race is Neal “Cover Boy” G’s to lose. After handily winning the donut run, he decided to throw down an extra two donuts. That’s like winning a marathon, then heading out for a five mile “cool down” run. There’s only one reason to do it: to put the competition on notice. He had the legs and he has the stomach. Will this be the victory that finally gets him a featured article in Running Times magazine? 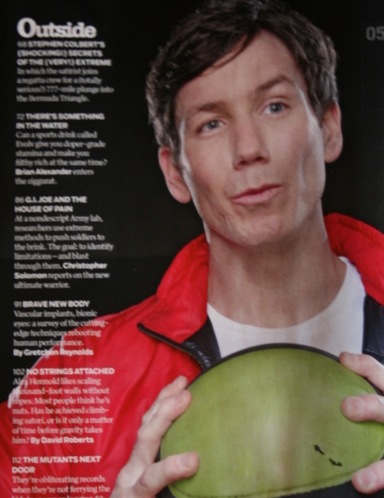 Neal G: Women want him, men want to be like him.

Of course, when the gun goes off, nothing is assured. Any misstep, and the competition will pounce. Sean A has the speed to be a threat, but his beer consumption abilities have never been proven. Tom C has been working on a special cheer to encourage Sean A; reportedly, it goes something like this: “C’mon! Pick it up Sean! You don’t RUN on your damn THUMB!” On the other hand, due to an uncooperative knee, Brian G has had to focus his training specifically on the consumption portion of the event. In speaking of the beer mile, Bobby G was rumored to have said, “I suppose I could do that as my WOD, however, I hope my Facebook friends don’t find out, because beer isn’t paleo.” Due to making up words, Bobby G was ruled to be drunk prior to the event. And the last time this commentator saw John L-D, he was trotting along in the early miles of a marathon, laying down 6:15s, carrying on a casual conversation when he had to divert to a beer table for some mid-race fuel. Clearly, John L-D was using that jog as a training day for this much more prestigious event.

Finally, one name stands out as the most mysterious on the entrant list. Some call him Fred, but he is more commonly known far and wide as El Hermano. He is rumored to share genetic material with Martha. That alone makes him a threat to all who seek victory. No one has seen his face, but he will make himself know when he makes his way to the starting line and, moments before the gun goes off, he demands of the competition, ¿QUIEN ES MAS MACHO?

As on the men’s side, there is a clear favorite on the women’s side, and her name is Martha “The Enabler” N. With a rare 100% ranking on beermilesignup.com, Martha will be looking to celebrate her birthday with another victory. 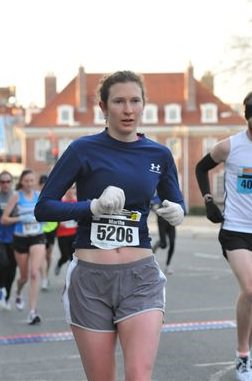 Martha N: Even in running-only events, she likes to show where the beer goes.

But this will be no walk in the park. Justine M is a strong competitor, both as a runner and a beer drinker. There are reports, however, that married life has cut in to her beer training time. When asked about these rumors, Justine responded, “My beer training regimen has absolutely not been adversely affected since the wedding. I’ll view any contrary claim to be a slander on the good name of my beloved spouse. I’ve had some great workouts in the last few weeks, and I’m confident that I’ll be in the lead pack.”

Brittany Z and Anna G recently demonstrated their gastric prowess during the Donut Run. Their consumption of a dozen donuts each sparked rumors that they were receiving double-secret coaching from The Black Widow herself. Brittany has refused to confirm or deny whether those rumors are true, while Anna has gone on record saying only that, “We have been training hard, and look forward to seeing that training pay off on the track.” Speaking of expert coaching, one should never overlook Michele H at a running event. Historically, she has not been a strong contender in beer drinking events. However, in a sign of just how seriously she is taking her training for this mile, she has enlisted the help of one of the region’s foremost beer drinkers, Joe C, to work with her as a live-in coach. That’s dedication!

There are too many strong contenders on both the men’s and the women’s side to be able to predict exactly how the race will turn out. This report is a preview of only a small number of the contenders. Could a dark horse gallop out of the gate and continue on to victory? It is entirely possible. And if that happens, you can be sure that we will provide all the details in the post-race coverage at wussies.net!