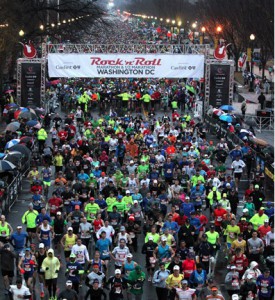 Not sure which I was more excited to find at the start (a) a warm grate to stand on, or (b) Keith.

Ooh, that’s no good. My shoulders sank when I saw the 1:30 time on the monitor.  I realized that, for the first time in seven years, I might race a marathon in over 3 hours.

My calves hurt. My right IT band was squirming. I had to piss like a race horse. My cold, drenched shirt clung heavily to my torso.

~ ~ ~
Aaron had sworn to the existence of a mythical creature: The Marathon That Doesn’t Suck So Hard You Wish You’d Get Hit By A Bus So You Didn’t Have to Run Miles 22-26. He attested to have experienced it himself, on many an occasion.
Personally, my spectrum of the post-marathon experience spans from a best-case scenario of curling up in fetal position for most of the day, to the not-uncommon medical tent-wheelchairs-hospitals-IVs combo.

Aaron had suggested several times a novel idea that ‘marathons feel better when you train for them’. But he also knew exactly how I felt about training. But as I’ve described in recent posts, I’ve softened just in the last few months to the idea that tracking my training and doing some more road running and pickups could result in less pain train on race day. Aaron bought me a very basic GPS watch and HR monitor this winter that I use from time to time to track my weekly mileage, along with Strava. I haven’t been using the HR monitor much in training, so we haven’t gotten down the measurements to a science yet. But I have at least a ballpark sense of what is an absurdly inappropriate heart race for a marathon pace.

wait, why is there a hill at mile 22 that resembles the calvert st hill??

The DC Rock ‘n’ Roll Marathon presented the perfect opportunity to test whether I could run a marathon that wasn’t a suck-athon. I was bounded: I had to fly to Amsterdam for a work trip at 6:30pm the day of the marathon. I simply couldn’t afford to spend my afternoon curled up in a fetal position, let alone a the hospital. 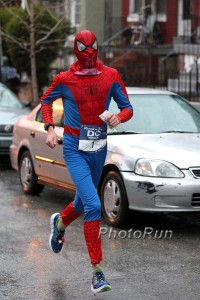 Wardian goes after another novelty record

The Rock ‘n’ Roll is a tough marathon to pace because the marathoners and half marathoners start together, making it all too easy to get pulled into going too fast by people who you know you’d be faster than if you weren’t running twice their distance. Good thing I had my handy dandy HR monitor to tell me if I was wildly out-doing myself.

Unfortunately, by mile 6 my HR monitor was informing me that I was wildly out-doing myself, with readings around 180. It would turn out that the monitor was picking up my cadence and not my actual heart rate, but it created enough confusion that I crawled through the 13.1-mile halfway point in 1:30 and change. At that point I realized the HR monitor was rubbish and wouldn’t look at my watch again for the remainder of the race.

I have a streak going of slipping in under 3 hours no matter the circumstances. Typically I give myself a good cushion so that I can positive split and still break 3. And the second half of the DC marathon is not quick. The field really thins out after the half marathoners finish, and there are few spectators along the course, especially in the Anacostia section. And there’s a major hill at mile 22. It was raining steadily and the road was filled with puddles. I had dug myself into a hole that I was unlikely to recover from. 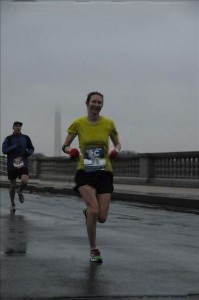 running in the puddles was fun

The only upshot of the rain and desolation of the second half was that I finally had the privacy to relieve my bladder. I found the perfect spot around mile 14, with a large wall on my left and no one in sight, where without breaking stride I let ‘er flow. And flow. And flow. I was still peeing when I turned the corner. I was still peeing when the official photo guy snapped my picture. I think I peed for a full minute.

I came out of that pee a different runner: loose, relaxed, comfortable. The rain was coming down hard, but I started picking off the runners in front of me.  I ate four gels over the course of the race, and never got nauseated.  I ran the second 13.1 miles in 1:24, negative splitting by over 5 minutes. My last 10k was sub-40. I ran the second half of the race the way you boil a frog: gradually heating up the pace.

The last time I ran so freely was the backstretch of the Women’s Half Marathon back in September.  The cramping in my calves had abated, I was able to eat four energy gels with no nausea.  I spent the last 6 miles flying by guys like they were standing still.

‘This is your treat,’ I told myself, looking across the Anacostia River at DC’s waterfront, finally feeling what Aaron had described.  As some of you are aware, the last couple years have taken a toll on me, as I’ve reluctantly entertained the idea of relocating for a professorship — I’ve interviewed from New York to Scotland to Australia. But just in the last week or so, everything in my life finally sorted itself out.  I finally secured my dream job here in DC at the Fogarty International Center at the NIH, where I’ve been working for 7 years as a contractor.  We are so very happy here in DC.  So even though it was a bit lonely running over there on the other side of the Anacostia River, gazing over at DC gave me a great feeling of peace and a sense of being rooted that I haven’t had in many years.  This is my city. 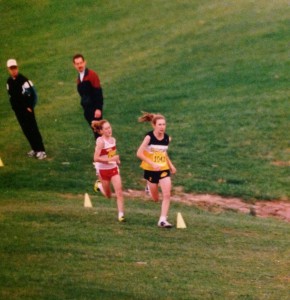 I’ve had some high drama moments over my long running career. As a sophomore in high school I trailed for most of the race by over 100 meters at the Maryland State Cross Country Championship.  In the last quarter mile of the race I caught up to the leader, Kari McCarty of Hagerstown, and passed her in the finishing sprint across the field at Hereford.  Kari had beaten me by over a minute at Regionals.  I also had a come-from-behind victory at the Montgomery County Cross Country Championship.  The county championship was even bigger for me than states because it was all my friends and rivals and all four school size categories competing together (1A, 2A, 3A, 4A).  But these days marathons and ultras rarely come down to the final meters, so it’s been a while since I’ve had to use a big finishing kick.

When you cross the Anacostia River and head towards RFK, you can glimpse an arch of balloons that appears to be the finish line. Rounding into the finish, I had no awareness that the first woman was just ahead of me until the crowd started going nuts. I heard a fan yell, ‘Go get her!  She’s just ahead!’  When I spotted her, I could tell that she wasn’t moving well, but she had a long lead and it looked like there might not be enough turf left in the race to catch her. And I still had to spin myself around that horrible hairpin just before the finish. 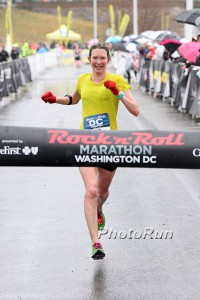 Despite the rain there were hoards of people crowded at the finish and there was total mayhem when I blitzed by.  If this were a Disney movie, this is where it would go all slo-mo.   She was hurting and couldn’t put up much fight. But there was a twist: the arch of balloons wasn’t the actual finish line. You can imagine the kind of curse words I was sputtering when I surged to what I thought was the finish and there was no time mat there. There was a bit of panic, as I couldn’t even see where the real finish line was and had to run under another damn under pass.  But fortunately the finish line was just on the other side of the under pass, my legs held, and there waiting for me was Aaron.  He was shocked when I came in breaking the tape.  The last time he’d seen me along the course I was 5+ min behind the leader.

I got the celebrity treatment after the race — interviews, flowers, awards, got to meet Jim Ryun (I was pretty giddy about that), and, the best gift of all, I got to stand on a very warmly heated stage that finally got my teeth to stop chattering.  The second place woman, Rebecca Bader, and I huddled together right in front of the heater, milking it for as long as we could.  She had finished 2nd last year as well, but nothing bonds two women more quickly than sharing a heat source.  The celebrity treatment continued on the metro, where other runners were adorably excited to meet the ‘girl who’d won the marathon’ that day.

I haven’t had this kind of thrill at the races in a long time.  But I have to admit, 2:55 is not a PR for me — this was actually the fifth time I’ve run 2:55.  But even though the race wasn’t faster by time, the feeling of the race was fundamentally different from the previous times, getting faster and stronger as the race went on.  I’m heartened by running the last 10k in 39:45, and the second half in 1:24, including the big hill at mile 22.  Honestly, even though a PR would have been nice, I’d easily trade a race that felt great for one where I suffer my way through to a new PR any day. 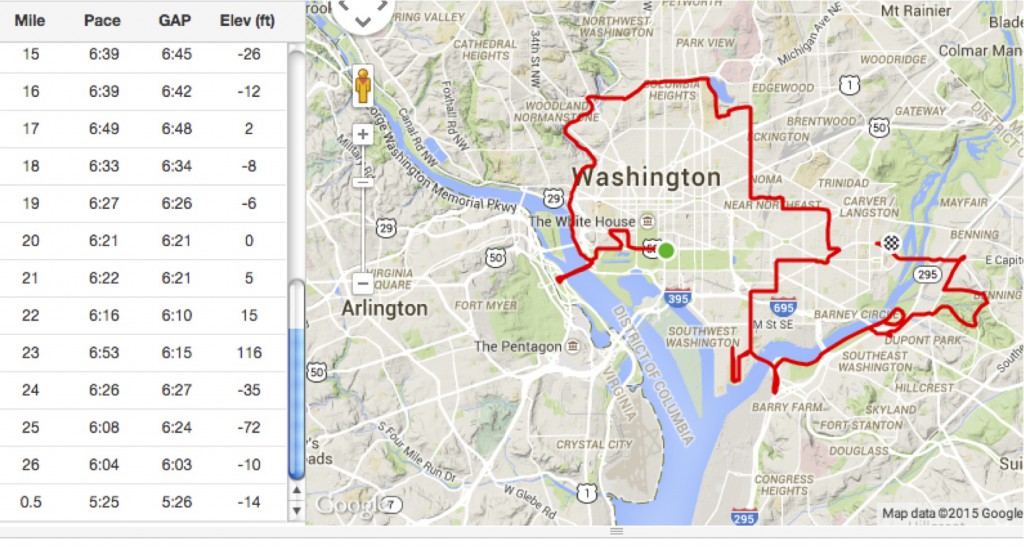