Ragan, aka The Professor, and her husband, aka The Other Professor, decided to take advantage of the summer by fleeing from the heat and the hustle and the occasional bussle of DC. They chose to head to higher grounds in West Virginia. I let Ragan know that I would be in Canaan Valley this weekend, and we agreed to meet for a light jaunt around Dolly Sods. I promised her that someone would have to go to Nepal to find better trails than the trails in West Virginia!

Ragan and I had a thoroughly enjoyable run in Dolly Sods. I took her on a 24 mile loop that covered many miles of trails in the southern portion of Dolly Sods, through lush foliage, over rugged, rooty trails, up long climbs. The trails twist and bend, following a sandy creek bed for a while before veering to the left through a grove of rhododendrons that lean into the trail just far enough to brush your shoulders as you pass them. At the next right, the rhododendrons might give way to a pine forest made dark by the high canopy. During the long, technical descent to the base of the Red Creek valley, Ragan mentioned that the trail was so technical that she could hardly take her eyes off the ground to enjoy the surroundings. I agreed. During the equally long ascent (equally long in terms of distance—much longer in terms of time), she suggested that after this run, she was going to have to rest her brain. I agreed once again.

I had explained the route yesterday when she offered to stash aid. After 13 miles, we reached Forest Road 75, know in some circles as The Road Across The Sky. We refilled our bottles with the water and Gatorade that she had dropped. The day had been cool but slightly humid. There were clouds in the sky, but so far, no sign of the predicted thunderstorms. We had been sweating and talking so much that the refill came as a welcome relief. A weird dude with a pony tail and a tie-dyed shirt pulled his beat-up, circa-1992 Camry into the parking area near the trail head. I asked if he would mind packing out our aid to save me the hour and a half of driving that would be required to retrieve the mostly empty bottles from that side of the wilderness. He was happy to oblige. Ragan pointed out that there was still half a gallon of water, a banana, and a small (airline-sized) packet of almonds in the bag that we left with him. Even though I feel like he did us a huge favor, I have no doubt that he counted the remains of our aid as a huge score.

We ran up the road for less than two miles before following another trail back across Dolly Sods. This portion of the run was in Dolly Sods North, which could almost be on a different planet from where we had started the day. The trail began by swooping up and down through a dense forest before taking us over a small crest where the woods gave way to wide open, rolling hills.

The weather and company were so agreeable that when we reached a decision point—where going straight would give us five more miles, while turning right would give us eight—we chose the longer option. As we had for the prior three hours, we continued yammering on about racing, experimental economics, relationships and whatever else might have occurred to one or the other of us at any point in time. We scrambled over a large beaver dam to cross a stream, filled our shoes with muck on a boggy, mossy trail, and we sampled some wild blueberries.

It was a perfect day for a run. 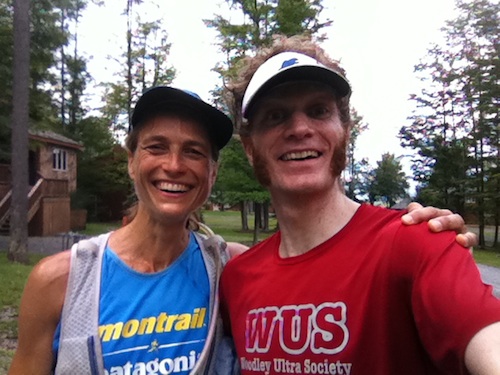 Wild and Wonderful---but which is which?