If it ain’t on video, it didn’t happen When will it happen? 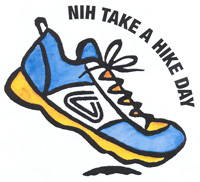 May 11, 2011 – The Fogarty Ultra Continent (FUCers II, definitely not to be confused with the Frisco Ultra Contingent (FUCers I), which, as far as we know, has never completed the formidable 2.8 mile loop around the National Institutes of Health (NIH) in Bethesda, MD) had a strong showing at the 4th Annual NIH Take a Hike Day, taking home the 3rd place trophy for participation by a ‘small’ NIH Institute/Center (IC). 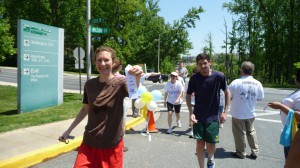 Showing off my bling, with Dan, Cecile, and Bernard en suite

But FUCer success did not come easy: it was a long, grueling road of preparation.  Following the NIH Health’s Angels Running Club’s Halo Chase 5k on April 22nd, we knew we had our work cut out for ourselves.  Tany had a particularly rough day, getting beat by a guy with one leg and on crutches, and then requiring 4 rabies shots for her wildlife encounter with a baby raccoon.

The Neal Gorman workout plan outlined in Runner’s World seemed like the sure-fire way to bring the FUCers up to speed.  But Martha had another idea for a training plan…..

Indeed, the Puerto Rican waters proved to be excellent training grounds for the 4-chick subset of the FUCers II known as the Puerto-rican Ultra Society (PUSsies). 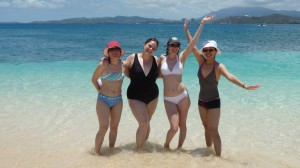 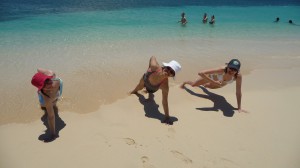 Tany continues to have unfortunate encounters with wildlife, this time scraping her leg on the coral reef. 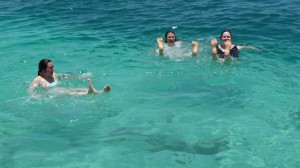 Lifting your feet out of the water really engages the core. 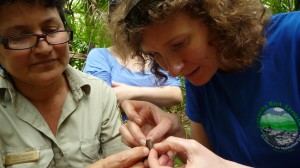 Fingernails come in handy when it comes to wildlife rescue.

For some altitude and hills, we found excellent training grounds in El Yunque rainforest, where our Ranger guide Cynthia whipped the PUSsies into shape.  However, Cynthia’s propensity to investigate every pile of leaf litter for snails and anoles resulted in what was billed as a 1km nature trail taking the PUSsies 2 hours to complete.  Although we learned an awful lot about rainforest ecology and even saved an anole from a twig collar it had been fatally ensnared in, I’m afraid a 0.5 km/hr pace posed a bit of a training setback. 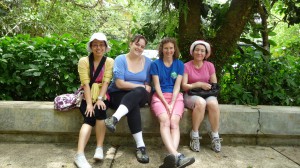 The other minor set-back occurred while I was running on the road that led to the network of beautiful trails overlooking the Atlantic Ocean on one side and Caribbean Sea on the other.  A woman pulled over in her car, rolled down her window, and started shrieking at me ‘Muy Peligroso!’  and insisting that I get in the car with her.  It was a narrow twisty road with little shoulder, so I figured she was objecting to the dangers of my getting hit, but she explained to me that there was a ‘crazy man’ lurking about.  It was broad daylight, I wasn’t wearing headphones, I was running at a good clip — all the criteria for what I consider safe solo running. I had no idea what ‘crazy man’ meant — could be anything from the town drunk to a serial rapist/murderer — but I realized I would mope for the rest of the trip if I didn’t return to the trails.  So the next morning I tucked my hair into a ball cap and wore a men’s size large shirt Sean had given me, and convinced that I could possibly be mistaken for Matt Woods from afar, I put on my ‘don’t fuck with me — I’m far more trouble than I’m worth’ face and headed out, playing a nerve-wracking game of Lizard or Crazy Man? with every rustle from the brush.  I was left with this overwhelming indignation that Being A Female Runner Sucks, that it’s so terribly unfair that I can’t run or hike or travel freely, and was having fantasies about cutting off all my hair and buying a rifle.  But just as I started to get really fired up about it, the bartender made me another Don Q and all was well. 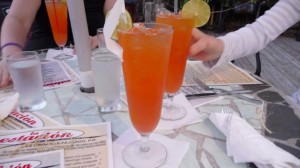 Don Q rum was a staple for the PUSsies