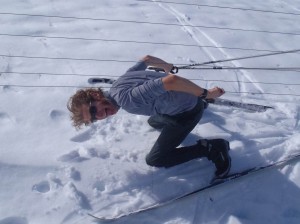 Aaron and I had vastly differing opinion’s on last year’s Global Warming winter.  I would unquestionably throw the proverbial snowman under the bus if it meant that I could run in shorts in February.  But last winter’s dismal lack of snowfall in Canaan Valley had decidedly sunken even Aaron’s sunny spirit.  Yes, even Aaron ‘still smiling at mile 80 when my left leg feels like it’s been quartered and my head bludgeoned’ Schwartzbard can frown when the white promises of winter fail to come to fruition.  As if to make up for last winter’s climatic letdown, Superstorm Sandy piled three feet of snow in the valley before November even hit.  With temperatures climbing into the high fifties, it was a sparkly winter paradise that had both of us blowing kisses to the weather gods. 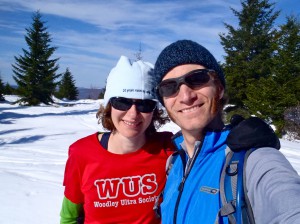 If you have not yet had the pleasure of cross country skiing or snowshoeing at Whitegrass Resort, it’s time to start cozying up to Mr Schwartzbard (or his girlfriend, who also gets a vote) in the hopes of winning an invitation to the Chophouse.  Because I am not a big winter sports aficionado (except for the kind where the chairlift hauls your sorry ass up the mountain and all you have to do is glide down), and even I dug it.  The biggest perks: (a) the views of the valley at the top, (b) the cheapy rentals ($10 for snowshoes), (c) the 1950s euro atmosphere of the ski lodge with friendly staff and GREAT FOOD.  Aaron certainly got a little help from the warm sun and blue sky, but I have been completely won over.  I even put snowshoes and xc skis on my Christmas wishlist of stuff I buy for myself (also on the 2012 wish list: Neil Young’s new CD Psychedelic Pill, ski poles, the new posthumous release of David Foster Wallace essays Both Flesh and Not, and a pony).  I’ve been putting Pony on the xmas wish list every year since I was 8.  I’m beginning to believe that Santa’s got something against equines.  Explains why his sleigh’s driven by bloody reindeer. 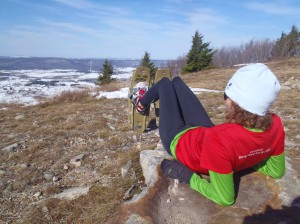 my kind of snowshoeing