Meira and I start the dam with Jim

Anyone who has run Alisa Springman’s Holy Cowans Gap 50k in May knows that Pennsylvania trail running is a breed of its own.  Pennyslvanians don’t seem to take much stock in switchbacks.  The Dam Half at RJ Winter State Park near Lewisburg, PA more than lived up to its billing — although that scratchy cotton longsleeve may soon be finding its way to Goodwill:

The elevation gains will surely leave legs screaming for mercy. Afterwards, contestants will bask in the camaraderie around the pavilion, complete with a warm fire and delicious food. This race is open to all levels of athletes who share a common love for the adventurous outdoors. Other namesakes to this outstanding event are the attractive long sleeve t-shirts, awesome top-finisher awards, abundant door prizes, and overflowing goody bags.  Earn a Marathoner’s finishing medal at this year’s inaugural Dam Full. 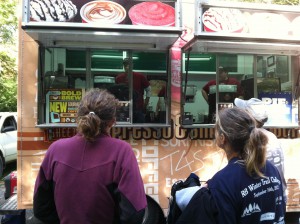 Meira and I were captivated by the Sheetz truck

First, I have to rave about the food.  Chicken BBQ, hot pizza, SHEETZ TRUCK…..what more could a hungry runner ask for?  A lovely sunny picnic table by a lake ?  Well, the Dam Half’s got that covered too.

Next, I have to rave about the course.  I went in pretty blind.  I knew it was tough, and I knew there was some horrid climb with a mile to go called Stairway to Heaven.  But LORDY it was technical.  I hadn’t seen vertical climbs comprised of boulder fields since….well heck, I don’t know if I’ve ever seen climbs like that.  I was in such a rock-focused trance dancing along on the Mid-state trail that around mile 5 I completely missed a right turn.  Now the Dam Half is one of the best-marked races I’ve ever run.  There were so many orange streamers in our faces that they actually started to get kind of annoying.  So I was still in the middle of my rock-trance when I recalled vaguely that some time ago I had been running, staring at my feet, and that an orange ribbon had flashed by.  Somehow that orange ribbon didn’t register in my brain until I was a long ways further down the Mid-state trail.  But when it did, and I realized that there was no one ahead of me and no one behind me.  CRAPPERS!   I ran back, only to see George Lesieuture making the correct turn.  George provided me with some indication of how many minutes I lost during my little foray down the MST (I finished 10 minutes ahead of George).  Lordy, I cursed up a storm.  Not only would I have to make up loads to regain my lead, but I was now stuck behind a train of slower runners with no room to pass.  Oh, I was pissed at myself.  How do you leap over an orange piece of tape and only have it register 5 minutes later that you probably shouldn’t have done that??  My only consolation is that the MST in one gnarly trail.  I know that because Sean at one point wanted me to run the whole thing with him.  And I know that if Sean wants to spend several days on a trail, it can only be because it’s totally gnarly. 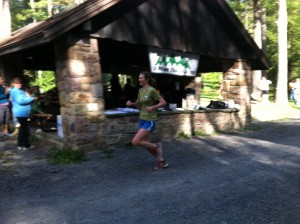 Stuck behind that line of runners, there was no way I was going to make up ground, and I begrudgingly accepted that in my idiocy I had lost the race.  But suddenly the trail emptied into an open grassy road and bingo!  I flew up the road, down the road, onto a wide trail, right past my friend Meira, who thought I was way ahead and was entirely perplexed to hear female breathing behind her, and to the finish.  I’m not sure why or how women breathe differently than men, but it’s totally true, you can tell the difference between guy breath and girl breath.  Anyway, I have to admit I didn’t quite ‘fly’ up the Stairway to Heaven, I kind of heaved my begrudging ass up that interminable climb.  But the road gave me a chance to redeem my rookie mistake, and I was thankful for it.  Honestly, I’ve never been so happy to see a road.