WUS-Honeymoon Milwaukee I have an announcement! 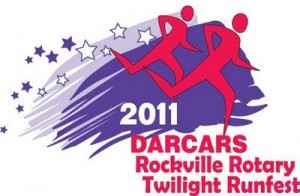 I got to pee before the gun went off!  Hooray!  That’s right, in a portopotty, and with ample time to get to the starting line and mill around, see the wheelchair racers go off and take note of a dude wearing shorts bittier than Matty Woods’s (Matty was supposed to be running for PR as well, but he had to work (ie, terrorize young lifeguard girls)).  At one point we were going to try to get a WUS team together for this race to see if we could upend some of the traditional DC road runner powerhouses like PR or Georgetown Running Company in the team competition, but I didn’t decide to race until last minute and no other WUSsies ended up running it — even Wardian didn’t show (something about trying to set a record for an indoor marathon that morning — why anyone would opt for an indoor marathon over the Twilight run is entirely beyond me).  Twenty-five years running, the Rockville Rotary Twilight 8k has become Washington’s premier running event of the summer, a classic.  The prize money isn’t huge ($350/250/200/175/150), but many of the region’s top runners come out for it at a time when there aren’t many other big races (both the men’s and women’s races this year were won by Ethiopians, see below) — and the whole running at night thing is pretty cool. 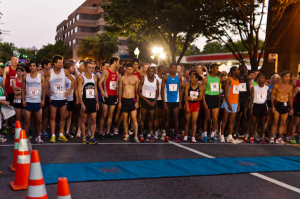 It’s rather nice to start a race comfortably, rather than a) having pissed your shorts (National Half Marathon, March), b) dashing across the Mall after the gun’s gone off (Race for the Cure 5k, June), or c) holding your bladder as tightly as you can for the first four miles because you’re determined not succumb to either a)  or b)  (Summerfest Rock ‘n Sole Half Marathon, July).  And the race stayed comfortable the whole way.  It was cool out for a July eve in DC, my bagel was sitting in my stomach nicely (it was hard to figure out what to eat before an 8:45pm race), my respiratory infection wasn’t giving me asthma despite the fact I forgot my inhaler, and it was nostalgic for me to return to a race I hadn’t run in, god, like 15 years.  Yes, the last time I ran this race was in high school, running it with my brother Fred, my brother’s friend Josh Hoyle, and my friend Sarah Schwertner.  It was bloody hot and when I sucked wind the whole way I discovered that all the girls I was running against in high school actually RAN over the summer (what a notion!) and beat me handily.  But despite the cold shock of pain and failure, there was something idyllic about all the neighbors sitting on their front lawns playing peppy music on their boomboxes and spraying us with their garden hoses.  And that there was a band playing and free beer at the end of the race that my brother snuck to me somehow which totally made those 5 hot wind-sucking miles entirely worth it to a 15-year old. 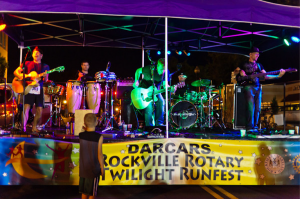 listening to live music is important for race recovery

I’ll admit it was a little sad to be there this time without any friends — I really can’t recall the last time I ran a race dead alone.  In fact, I was pretty down at the beginning of the race, wondering why I had trekked all the way up there to run by myself and get my ass kicked by all these super speedy people.  I was snot-rocketing all over the place and my nose was all snuffed up and I was drained from a hot day of intensive shopping (as long as I had to go to Rockville I crammed in a million errands along the Pike, including a trip to Racquet ‘n Jog sports, the best running store in the world — it still tickles me pink how they let me Mix the Box (as in buy a discounted box of Cliff Shot Bloks and put whatever different flavors I like — gotta love the little things in life) — but I think I lost a good 20 seconds off my time from the absolutely miserable trip to the Verizon store, where I almost dropped an F-bomb when they told me the $15 of minutes I’d bought for the pre-paid cell phone I bought merely for the purposes of having a doorbell expired after 60 days) — anyway, I digress….).

Truthfully, my legs felt like puppies let out after a long snowstorm.  I kept furrowing my brow in minor confusion — why were they going so fast?  In the opening mile I just picked female runners off one at a time (the cuter and more elaborate the running outfit, the more I enjoy passing them — I kept recalling Aaron’s hilarious impression of the Apolo Ohno speed skater starting positions he witnessed at his latest 4-miler).  But I didn’t want to get carried away — 5 miles might seem awfully short to an ultra runner but it’s still a bloody long way to go at the 5:45ish pace I was clipping away at (I couldn’t help but see the big clocks at every mile — I wish I hadn’t, as I found it highly disconcerting to be going through so quick (at 3 miles I was in the 17:20s), making me feel like I was a ticking time bomb that was going to blow.  But I had a big kick at the end, passing a bunch of guys and the 5th place woman to finish in the money.  I still can’t quite figure out why I felt so good — I felt good even after the race, and dashed the mile or so back to my Volvo still feeling high.  Maybe it was my new Mizuno racing flats I broke out — they are flashy and red! 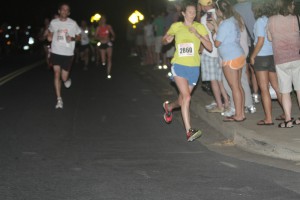 not running any farther than I have to around that corner....

After the race I actually apologized to the 6th place woman I passed right at the end — it just seemed like a dick move to sit behind her most of the race, maybe 10 yards back, and then blow by her right at the finish.  I tried to explain to her that I just don’t have enough current speed work or experience with short races under my belt to know what I have in me and had run a bit too conservatively perhaps because I couldn’t recall exactly what the threshold for pain is supposed to be in these short events.  I really wasn’t out there to murder myself — I really just wanted to have a refreshing race where I felt good start to finish — after the dismal Highland Sky experience I’ve been on a quest to just try to feel good about running again, get a little pep and confidence back in the legs — they were so defeated and dejected after HS.

Here are the women’s results (ignore the Pace part — this is clearly incorrect on the website).  The race was won by Ethiopian Tezeta Dengersa.  So the girl who was 4th ahead of me, Lucinda Smith, I used to run against in high school (when she was Lucinda Hull — I was always faster than her and her twin sister Claudine (I don’t know who named these kids…)).  But yeah, yeah, she’s all faster than me now, runs for Adidas and is in some US Elite Development program.  Back in high school she and Claudine would use their formidable twin power on me, who always felt very abandoned, as everyone else was on these big teams with lots of fast girls and my school, B-CC, didn’t even have the 5 runners needed for a team and our second-best runner, my friend Mary Havell, quit XC to play field hockey.  So I could run with the guys during practice, but on race day I was pretty much on my own against these swarms of girls in matching uniforms and hair bows (or matching faces in the case of Lucinda and Claudine).

In the Team Competition, GRC won by 6 minutes. PR really suffered without their WUSsies Wardian, Matty, and Aaron.

And the men’s, won by another Ethiopian Abiyot Endale.