Jingle All the Way 8k christmas’13

After the great disappointment of not getting to run Massochist with Sean in November, I was treated to the opportunity to have a long, snowy run with him and Schmitty at this year’s MGM.  Sean had just had brain surgery to replace the battery in the chip implanted in his brain for seizure control (hence the sportin’ hairdo pictured below).  So I had agreed to run whatever version of MGM Sean had in mind.  As my fibroma is still a bit problematic on trails and my hamstring was still sore from Jingle All the Way, I had no need to push for the whole 50k anyway. 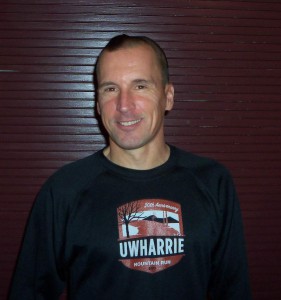 Sean, Greg Z, and I ran to Fountainhead together.  I started out wearing my red lobster hat courtesy of Keith, but it was actually pretty warm out despite but the icy footing and I ended up dropping the hat after about a mile.  MGM ended up being exactly what I want it to be: a chance to catch up with folks.  It’s always a bit disorienting to notice that some people seem to think MGM is a race.  For me, it was great to be able to spend a couple hours running with Sean, since I hardly see him now that he’s has moved permanently to Leesburg.  After four years of religious Wednesday night runs with Sean, I now spend my Wednesdays evenings at pilates class.  I like pilates alright, but there isn’t nearly as much giggling.

I was tempted to continue onto the Do Loop with Greg (who’s one of the most entertaining people to run with), but I’d told Sean I’d get him and his head wounds back to Hemlock, so I headed back with him and Scmitty.  Brian and I have our differences over which hills should be run and which walked, but fortunately Brian is not in top shape after coaching cross country.

Although my whole not-driving thing can be a pain in the arse, carpooling gives me a great opportunity to catch up with other folks — like Tracy, who I carpooled with to MGM, and with Priya, who drove back to DC with me (via Wegmans!).  In addition to our shared love of Wegmans, Priya and I have an uncanny list of other similarities in our upbringing/schooling:

(a) we both studied abroad at the University of Melbourne (we attended rival colleges, Ormond and Newman)

(b) we both played soccer in college (me at Amherst, she at Penn)

(c) we both went to Stanford University (she for law school, me for my freshman year of college before I transferred)

(d) Priya currently lives a block away from where I went to elementary school (Chevy Chase Elementary), where I won the mile in 6:57 as a 5th grader (26 laps around a square gym)

Priya also just ran the Kepler 50k in New Zealand’s South Island, a race I have desperately wanted to get Aaron to do (but it’s around the same time as Hellgate, so the odds are stacked against me).  I wonder if Priya also loves kitties and ponies.

* Wishing everyone a great holiday and New Years, and hope to make a return to WUS in 2014! *

ps – I can’t help but include the line that my Brazilian colleague sent me today wishing me a happy holiday:

“Large tether, have a good Christmas and happy new year!”

(After some forwarding to Brazilian colleagues and discussion, we decided that by ‘large tether’ this individual was trying to mean ‘big hug’)