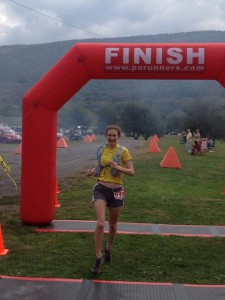 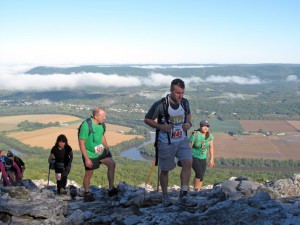 This is the last time I’m gonna say it: Wussies, you all are missing out on a treasure trove of beautiful, challenging technical trail races just a short ways north in Pennsylania (we drove there in 3.5 hrs on Friday) that are impeccably organized with hard competition and great shwag (check out videos and photos at the website).  Greg Zaruba (who has no excuse not to come to WUS now that he has a trail-running lady friend in Cleveland Park) is the only other one who gets it that these races are AWESOME.  The fact that it takes the first male 4.5 hours to complete the ~26-mile Megatransect is testament to how gnarly this trail is (it runs more like a tough 50k).  The iconic section is the 1-mile boulder field ascent that occurs around mile 6, which is made all the more challenging by the fact that you can’t use your hands to help navigate the rocks because you’ve been forewarned that the rock field is home to copperheads and rattlers.  Although the weather was cool enough today that the snakes were unlikely to be active yet, I was still inclined to keep my nose out of chomping distance. 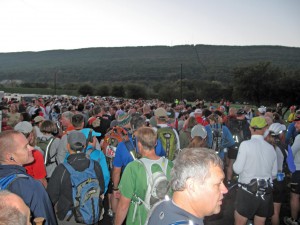 the cult of the mega

The Mega is an extremely popular race: the field of 900 sells out in 2 hours on New Year’s Day, nine months before the event is held.  I failed to sign up (I was off doing the Redeye), but there were so many computer glitches during registration that a few more spots opened up and I was able to snag a spot a week later.  As soon as I saw that spots were open, I emailed Zaruba so he could enter as well, as we had run together at the Magnus Gluteus in December and spent several miles fawning over the beauty and gnarliness of Pennsylvania trail races. 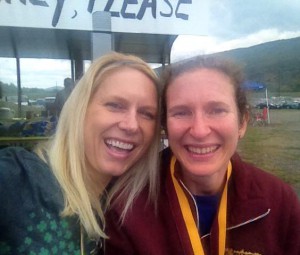 Greg had initially wanted to camp at the start/finish area, but with temperatures in the 30s at night I wasn’t so keen.  Fortunately my wonderful friend Kathy is always generous about letting me stay at her place when I visit State College, so Greg and I were able to crash with her.  The Tussey MountainBack relay is only a couple weeks away, so also took advantage of our trip to State College to have Happy Hour with my team and sort out our shirt designs and leg assignments (tricky because some legs are flatter and longer and other legs are shorter but hillier, so it’s not clear which is more suited for the slower runner).  Now that my former PhD advisor Eddie has moved to the University of Sydney I don’t get up to State College so frequently, so it was great to have a chance to catch up with the gang over some pitchers.

Neither Greg nor myself were planning to treat Mega as anything but a long enjoyable day in the woods.  Greg has the Oil Creek 100 next week.  And I had already expended all my competitive juices at the Women’s Half two weeks ago.  But of course Zaruba blasted out at the start and I had to go chase after him.  That would become the theme of the run, as I let Zaruba go again as I took some time to adjust to the rocks early on.  After 10 miles or so I finally figured out that I felt all wobbly on the rocks because my shoes weren’t snug enough.  Once I adjusted the laces I was good to go, but by that time Zaruba had a good 5+ minutes on me (I couldn’t even see him during the slow mile-long boulder climb when you have a long field of vision).  Nor could I spot the first-place woman, who was also up with Zaruba (who turned out to be my friend Meira, a perennial winner of the Mega, Hyner, Rothrock, and the other major PA trail races).

I wondered whether I would  ever catch Greg and Meira.  But this was a race I wasn’t going to push, and I just kept going my own pace.  And there was plenty to enjoy along the way: beautiful vistas over the valley, fields of ferns turning their autumn hues, massive waterfalls.  Every year the Mega designs a new course (and each year a little longer), so every year brings new scenic surprises.

I caught up to Meira at around mile 14 at the fatty waterfall (she had fallen several times and described her day as a ‘mudfest’), and to Zaruba shortly thereafter.  Greg and I ran together for a while until I got a large rock in my shoe during a creek crossing.  By the time I got my shoe back on again, two more runners had passed and Zaruba was out of sight.  I passed those guys back and made an effort to catch Greg.  But I had to stop at an aid station and re-fill my bladder, which took a couple minutes.  And after already catching up to Zaruba twice that day, I had lost some of my zeal for chasing Greg all day.

So instead I ran alone.  I passed a couple more guys, but never saw Zaruba again until the finish.  I was in good spirits, the course was spectacular, full of rocks and roots and hazards.  Perfect for someone like me who gets bored easily.  There were loads of lethal 2-inch stumps that I kept getting snagged on, but I managed not to fall the whole day.  I had a hard near miss where I really should have gone down, but my legs had the strength to catch me, which I found surprising so late in the race.

After the mile 22 aid station the course went up a gravel road briefly and then turned back into the woods onto single track.  Unfortunately I didn’t see the blaze for the turn (all other major intersections had volunteers directing — overall the course was impeccably marked) and kept heading up the steep gravel road.  I didn’t see any blazes for a while, but thought they might have figured they weren’t necessary on a straight road.  But after what was at least a half mile I got a sinking feeling about the lack of blazes.  It was so late in the race I desperately didn’t want to backtrack.  But after there were still no blazes after another bend, I made myself trot back down.

My heart sank when I saw the ribbon going into the woods, realizing that I probably had lost the lead.  But there was nothing to do but solider on.  At this point the race decided to kick a girl while she was down, and I had to ascend the most gruelingly steep and long climb of the day.  Just as I desperately needed some sugar and energy, my gel malfunctioned (I ripped the top off, but it didn’t make a hole and no matter how I tried to use my fangs to spear the gel like a rabid wolf I could not extract the liquid inside).  My heart sank even further when I spotted a guy I had passed miles ago at the top of the climb, giving me an indication of just how much ground I had lost during my ‘bonus miles’.

But I eventually passed him back and received confirmation from a volunteer along the course that I was still the first female, and finished the race in a good mood, despite the wicked ‘Green Mile’ finish — a mile straightaway of high grass along a highway.  The finish area was wonderful — free barbecue chicken and pizza and great beer for all.  My friend Kathy was waiting at the finish, along with Greg, who seems to know every PA trail runner (so there was lots of schmoozing).  Kathy’s quasi boyfriend Dan also ran (who quickly became a winner in my book after informing us that he owns a stable of Arabians he competes in endurance riding). 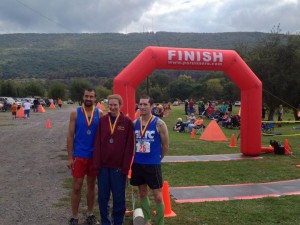 winners pose for the newspaper photo

The Mega doesn’t give prizes for winners, but every runner got a great zip-up sweatshirt that was  superior to most race prizes I’ve gotten.  In many ways the Mega is a classic that has remained true to the roots of ultra running, where the emphasis is more on enjoying a beautiful day in the woods than on finish order, even among the top runners.  At several times I had to plant my feet and take in the view for a couple moments.

The registration process for Mega is admittedly an ordeal.  At the finish area they were even selling t-shirts that said ‘I Survived the Mega Registration’.  But its cult following reveals it’s worth it.  Wussies who like challenging courses should go see for themselves.