My One-Night Stand With the News Media Regret

I was in elementary school when our gym teacher Mr Palmer made us run a timed mile around the gym.  The gym was barely the size of a tennis court, so we had to run 26 laps around a rectangle defined by four orange cones.  We split into teams of two: one person ran the laps, while the other counted.  Odette was my partner. 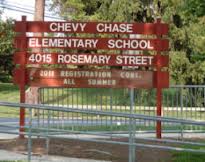 I was a kid with too much energy.  I used every piece of furniture in the house as my personal gymnastics vault.  So I skidded around those 90 degree turns like an over-sugared rocket, finishing the mile in 6:57.  I beat everyone except two boys, Jonathan Kosack and Pablo Wolf.  Mr Palmer phoned up the high school track coach to tell him he had a killer 10-year old coming his way.

But there was one thing Mr Palmer didn’t take into account when he anointed me Bethesda’s next track star.  And that was Bob.  Bob wasn’t like the other dads.  He drove around in his convertible with the top down drinking gin from a glass.  Without a seatbelt on.  Bob didn’t like the Nanny State telling him what to do.  Or his Nanny Wife, for that matter.  She was a real toughie, trying to get him to take showers and all….once a week.  My poor mom did her damnedest to keep the stains off his clothes.  But she couldn’t get him to shower.  He had a toenail fungus that crept all the way up his shins like ivy.  His toenails turned greenish brown and thickened, growing over the tops of his toes so they clicked the floor when he walked.  One day my dad came to pick me up at school, and I had to defend him from Mr Grapes, our school security guard, who was escorting him off the grounds because he mistook the man dressed in stained, tattered clothes for a vagrant.  I’ll never forget my squeak, It’s okay, Mr Grapes, this is my dad!

For a lot of my life, my dad’s anti-establishment libertarianism made him my hero.  Stick it to the man!  Mom couldn’t yell at me for leaving socks in the living room when dad did the same — and his were stinkier.  But you know how every neighborhood has one family that everyone looks kind of sideways at?  Looking back on it, I realize that was totally my family.  We had a big dog named Sam.  For some reason we didn’t neuter Sam.  I still don’t know why, because he bit my friends, terrorized our extended family, and had to go under house arrest.  Our neighbor walked his rottweiler Rex every night with a ski pole, just in case Sam got out.  I’m not quite sure why we didn’t neuter Sam.  He was a giant mutt, and we sure as hell weren’t breeding him.  I guess my dad thought neutering would make him a sissy.  The kind of dog that couldn’t hold his gin. 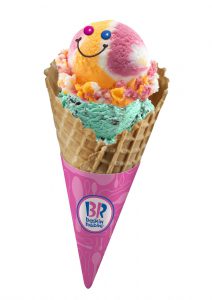 But getting back to the point…..A Note To All Future Dads: if your  daughter dashes a mile in a fast time for a 10-year old, maybe take her out to Baskin Robbins.  Maybe buy her some proper running shoes.  Or, heck, maybe just do nothing and keep on reading the Times.  But whatever you do, don’t do what Bob did.

Bob’s response to his daughter’s mile was, Huh, I wonder what I can run a mile in.  So one Saturday morning he dragged me out to the local high school track (a proper outdoor track, not the gym floor outfitted with cones) and made me line up with him.  It was a dull, cloudy day, and we were the only ones there.  He started his wristwatch and dashed out to the lead.  I couldn’t keep up, and dragged behind him for four laps, weighing the pros and cons of dropping out.  More and more distance spread between us, and he finished exuberantly in around 6:30.  I plodded in despondently after him in 7:15.  As we drove home, he marveled at how an old guy like him could run so fast, and I feigned enthusiasm.  He had crushed me.

Any interest I may have had in running was drained that day, and I wouldn’t race again until high school, when the field hockey team made me. 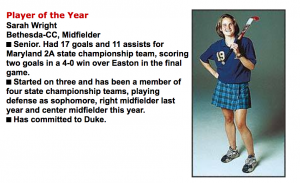 My best friends were all field hockey players.

Coach Wood was all business.  Her temper was as fiery as her hair.  Beneath her khaki shorts her legs were rippled with muscles.  She wasn’t afraid to make girls cry.  Or make them work.  After all, she made them champions.  As part of pre-season training, she also made every JV and Varsity player run a mile in under 8:30, or else they couldn’t be on the team.  Adding to her Fear Factor, she ran the mile with them, and kicked everyone’s ass every time. 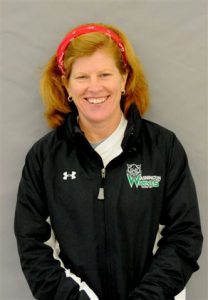 Entering B-CC as a freshman, I had never held a field hockey stick.  But the school’s best freshman athletes vied for the coveted spots on the JV team, and I was determined to get one.  But they sure made you earn it.  Try-outs were held in August, the week before school started, with two sessions each day, morning and afternoon.  August is brutally hot in DC, and every day was Code Red on the ozone index, meaning that we weren’t even supposed to be outside.  But Coach Wood didn’t give a s&$t about air quality.   Our days were filled with wind sprints, stairs, push-ups, and hills.  And finally, the dreaded mile.

The course consisted of two laps around the high school grounds, right by the very track where my father had proudly beaten me four years earlier.  We all set out together as a clump, but spread out quickly.  The hot air made It hard to breathe, but the trees along the sidewalk at least provided some shade.  I started off in the thick of the pack, but steadily moved up until the only ones ahead of me were the superstar All-Met Washington Post Moe Denney and Coach Wood.  I sheepishly moved past Moe’s larger-than-life aura, and settled in behind Amy, paralyzed.  I was terrified of her.

But she would have none of it.  Come on!  Coach Wood yelled, beckoning with her hand for me to approach.

Come ON! she repeated, becoming exasperated and flicking her hand again.

With a burst of energy and exuberance, I flew past Coach Wood and up the hill to the finish.  I did the two hilly loops in just over 6 minutes, finishing in a place that overlooked the very track where I had run with my father.  I was the first B-CC field hockey player ever to beat Amy.  And she was ecstatic.

It’s been more than 20 years since I played field hockey at B-CC.  But whenever my running gets in a dark place, I still think of Amy.  There are just a handful of moments in life when someone gives you just the right nudge, at just the right time, in just the right way.  And changes your life forever. 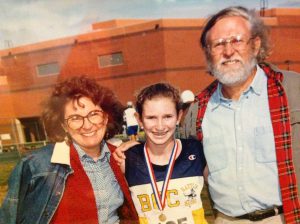 I turned out to be too scrawny for field hockey, and switched to cross country my sophomore year.  My toothpick legs surprised the field by winning the Montgomery County Championships.  But Parents of the World, let’s be real, you have no idea who your teenage kids are.  If you’re lucky, maybe you’ll find out something later in life when they start blogging.