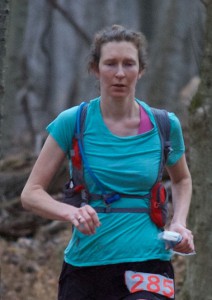 hardly had to write the blog: this picture says it all (notice the clenching of the toilet paper tissues for dear life)

‘I’m done.’  I whispered in Aaron’s ear.  The sun shone wide across the blue sky, and the fall air was crisp and calm.  It was perfect weather for a long day of trail running.  My eyes were tearing but my mouth was smiling.  ‘But walk with me, Bear.  I gotta find a place to scratch some leaves.  And quick.’

My legs had no interest in quitting.  They’d held up well over the 27 miles I’d covered.  Despite my abdominal organs all conspiring against me, I hadn’t actually lost any time on the lead woman.  But I had a clear intention for the Stone Mill 50m.  I wanted proof-of-concept that I could run 50 miles like a fat-ass: easy, uncompetitive, and just covering the miles no-drama.  As if it were Catawba.  Or the Teton Crest Trail.  A long day on the trail with friends and critters and without any parties in the stomach.

But by mile 17, where I met Aaron at the aid station, it was clear that my vision was unattainable.  Sometimes your race happens to fall on the wrong day of the calendar.  I have one day each month where I’m immobile.  If I take the day off from work, take a steaming hot bath with an overdose of prescription pain killers (up to the equivalent of 3200 mg of ibuprofen on particularly bad days), and curl up in a ball, I survive the day.  It’s hard to eat, but I force feed just enough to be able to take the heavy painkillers.  The pain comes and goes in waves, and sometimes if I take a short jog during a ‘good’ wave I can feel a little better.  Get the circulation moving the blood around.  But it’s not a day to race.

Maybe I was a little overly optimistic toeing the line at Stone Mill.  The timing of things was such that I knew that the first bad wave was coming.  But bodies are curious, and sometimes the body’s Schedule of Events doesn’t flow quite like clockwork.  Maybe I’d get lucky.

Luck is a funny thing.  As Aaron and I walked out of the Mile 17 aid station, I found a four-leaf clover on the side of the trail.  I screamed words of exultation that I hope no children overheard, I danced, I hugged Aaron.  The draught was over.  I’d been afraid I wouldn’t find another before winter set in.  After several months with no four-leafed friends, I had started to consider what I might have done to offend them.  True, it had been a very busy fall, with so much travel that I hadn’t once made it out to West Virginia to see the Sodds in their flaming fall colors.  West Virginia is where I go to put the pieces back together, and stop the rattling.  And rattling brains are not so likely to find clovers.

Whenever I tell people that I find clovers all the time, their first response is ‘Lucky.’  Sometimes I just nod and smile.  But if the mood strikes, I’ll point out that the only people who think clovers have anything to do with luck are the people who rarely find them.  Yes, I’ll admit that clovers do have something to do with serendipity, and the stochastic nature of life.  That the world is not as controlled as we’d like to think it is, and that low probability events have outsized effects on human existence.  But most of all, clovers signify the beauty of mutants.  That in any population there will be certain creatures that just fall outside of the charts.  And trying to homogenize them will bring only misery.  And, at a broader scale, that we are all unalike in our own little ways, and happiness is attainable only when you can still cherish people even when you don’t have foggiest idea how they can think the way they do.

It occurred to me that my little Mile 17 clover might turn my race around.  I had drunk an entire Ensure.  Holly had given me some Tums. (I had wanted to tell her that my problems were so much bigger than Tums, but she was so sweet about it.  And pain makes me taciturn.)  Hope was also buoyed by the way that the pain always goes in waves.  There were moments I felt invincible.  But then the good wave would always recede into a bad wave, and the reality sunk in: today was a day when I should be curled up on the carpet with a pile of blankets, not trying to cover 50 miles.

It occurred to me that Aaron might try to make me push on to one more aid station.  I resolved that if he wanted me to not quit at 27, I could push on to one more aid station.  I certainly didn’t want to, but I trust his judgment.  But Aaron is a smart bear.  He knew that if Stone Mill had been a priority race for me, I could have sufferfested to the finish.  He also knew that it was his job to nudge me on if he thought I was just going through a temporary bad spell and there was a chance that my race might turn around.  But he recognized that neither of these scenarios were true.  He also knows that I have proven multiple times that I can sufferfest to the 50-mile finish line.  Proving that again is pointless, and I would take no pride or joy in it.  It would only leave me with one more bad taste in my mouth and one more notch in the number of miserable ultra experiences I’m willing to tolerate before I throw in the towel and refocus on marathons and road races.

I rolled around on the carpet in pain for a while when we got home, happy that I had quit before things had gotten too bad.  I was uncomfortable, but it would have been so much worse if I’d made myself finish.  And I know what worse means: today was nothing compared to the aftermath of the NAF half marathon, where I’d missed my flight to Mexico.  I tried to have my post-race deconstruction talk with Sean, but my stomach wouldn’t allow it, and partway through I had to hang up.  I’ll still never forget the way he put an icepick in the wound when I dropped in my first Highland Sky at mile 32 (‘What?? You only had 8 miles to go.  You could have just walked it.’)  I wish I’d known then what I know now: that Sean is a mixed bag of sometimes gutting out the ugliest of times, and sometimes just dropping because the winds are wrong.  Earlier in the day, Holly had been telling me about having to drop at mile 97 at Massanuttan because of asthma that made her husband fear for her life.  At the end of the day, everyone who runs trails for long enough is going to have their own goodie bag of drops: the drops that were medically forced on us, the drops that we could have pushed through but didn’t feel like it, the drops that still eat at our hearts because we know we should have done differently, the easy breezy drops that mattered less than that time you forgot to scoop the cat box.

When I was feeling better, Aaron and I had a bit of dinner.  I ate my food eagerly.  I was in a surprisingly good mood for having had such a crap race and rough day.  ‘This is the first time,’ I declared, feeling a change stirring in me that I hadn’t felt before.  ‘Growing up, if I had a bad race, you know how that would’ve gone.  By dinner time Bob would still be dissecting it, piece by piece, where it went wrong, where I erred.  It would go on for days.’  I cradled a pile of string beans on my fork and scooped them into my mouth all together.  ‘You have to recognize how different this is.  Finito.  Move on.  Shit happens.’  I shook my head, marveling.  ‘Thank you.’