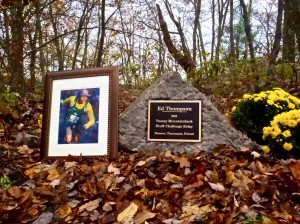 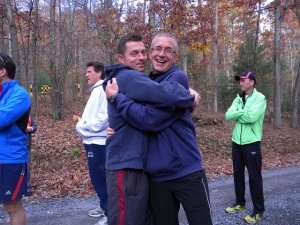 bob and john show their camaraderie

A major theme of this year’s Tussey MountainBack DCR was to honor our fellow DCR runner Ed Thompson, who tragically died of a heart attack along Leg 8 at last year’s MountainBack.  At the transition zone between Legs 1 and 2, where Jamie snapped this picture of Ed (to the left of the rock) as he began Leg 2 last year, we held a group ceremony for Ed that included Ed’s family.  It was a beautiful and moving tribute, and I think highly therapeutic for all those who remain affected by the trauma, particularly those who were there with Ed trying as best they could to help him as he slipped away.  All the DCR teams wore purple armbands in honor of Ed and incorporated his name into the DCR shirts we made.  Although the DCR was certainly competitive as always this year, there was an additional sense of camaraderie and an awareness that all of this is so precious and fleeting. 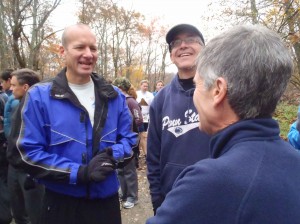 This year’s DCR had 7 teams of 7 runners.  I drafted my team by phone since I live in DC, a challenging enterprise given Tom’s tendency to put his phone in his pocket while I was trying to recite my picks.  Since I was running the Baltimore Marathon the week before MountainBack this year, I desperately had not wanted to be a captain, but the DCR Commissioner, infamous for his intransigence, could not be swayed. 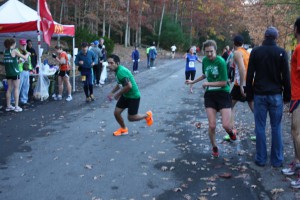 I ended up picking five runners who have been on my team before: Jamie Volkert, Mike Martin, Joe Montenegro, Rob Peterson, and Joel Nieman (Joel was my killer last sleeper pick) and one guy who seemed really fast but was an unknown: John McGraw. 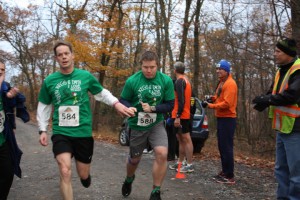 The other things my team had going for it (other than personality) was (a) Mike Martin is the State College beer distributor so we’d be sure to be cruising in the fully stocked Nittany Beverage beer van, (b) Joe Montenegro is one tough m-f-er who would be able to run the brutal captain legs (4-11) since I’d be a post-marathon invalid. 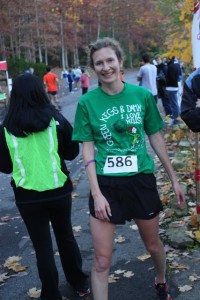 best shirts by far, thanks to aaron (how I do I keep finding new talents?) schwartzbard

The theme this year was ‘Dr Suess’, resulting in the worst year of name-picking in DCR history.  I’ve ranked the team names from worst to best (Every year to make up for my lack of running prowess I at least bestow upon my team the best name.  This year we also had far and away the best shirts, thanks to Aaron’s nifty graphic design):

We Can Run With Our Eyes Shut

Can You Lick 7 Tigers Today?

Herndon Hears a Who!

Green Kegs and Damn, I Love Hills (my team) 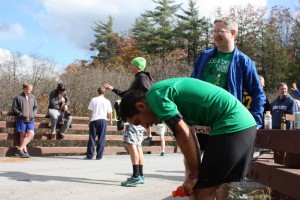 Joe considers how much he hates me

The Green Kegs had a damn fine day.  I’m eternally indebted to Joe for running Legs 4 and 11.  My IT band was still screaming from all that weaving at the Baltimore Marathon and there’s no way I would have been able to run those steep downhills on Leg 11 at the end of the day. 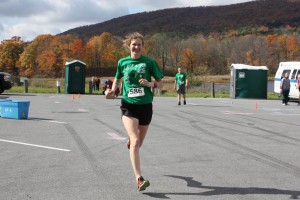 heading off to find Luna 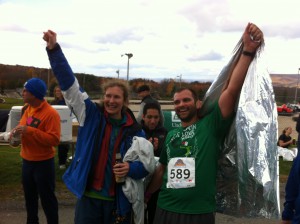 But it was such a beautiful sunny fall day and we had such good times all around, it was worth gutting through some tough stretches where my knee made it very clear it was displeased with my course of action.  As expected, Joel Nieman was my sleeper 6th pick and he passed a We Can Run With Our Eyes Shut on Leg 7 to bring us out of last place, a proud position we held until the end. 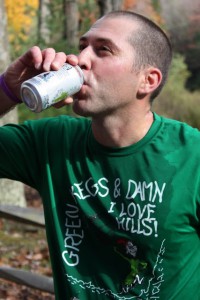 The Commissioner was displeased with the Green Kegs because when it came down to priorities, ours was getting our teammate a cold beer as soon as he finished his leg, rather than keeping his splits, resulting in gaping holes of data in our stats report and angry engineer number-crunchers whose models will go haywire. Our professional beer connoisseur Mike Martin recently introduced me to Yard’s Philadelphia Pale Ale, my beverage of choice for the day. 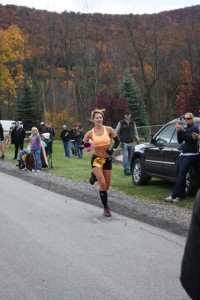 Sonja got the biggest cheer of the day

My post-race picnic of free food and beer by the lake was a bit delayed this year because all the Old Men of the DCR were drooling all day over this hot ultra runner, Sonja Hinish, and all were waiting to see her finish.  Some of the women of the DCR expressed a desire to be spared from the old-man-slobber, but I’ve run with these guys long enough to be entirely inured to such behaviors.  I only protested that some chick, wearing a sports bra with arm warmers no less, was getting between ME AND MY SANDWICH.  I finally rolled my eyes and headed to the lake with John McGraw, the only civilized male of the lot (or maybe he knew that letting a hot female competitor get between me and my grumbling stomach was surely tempting one’s fate). 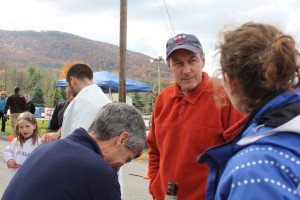 But it was great to catch up with so many from the old days at Penn State.  When Greg Fredericks, US Olympics qualifier for the 10,000m for the 1980 Moscow games, asked me after MountainBack whether I have ever considered running the entire 50 miles at the Tussey MountainBack, I answered so definitively that I had that for a moment he thought that I meant that I had in fact run the 50. 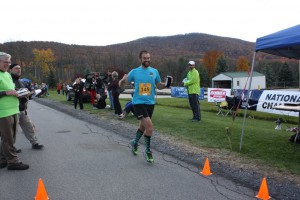 seeing renz run the whole 50 made me even ITCHIER

But what I meant is that I had considered it so deeply, that I get the itch so badly to run the 50 every year, particularly this year. (This year Connie Gardner won again, and some guy named Zach Bitter won the men’s 50). 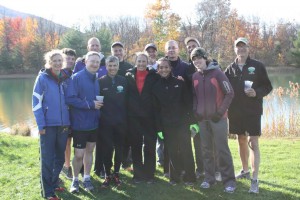 But as bad as that itch is, as soon as I remember what I’d be missing out on, all those hours bouncing along in the van with all those goofy people, witnessing all the great drama of the DCR unfold over the day, I immediately dismiss the idea of running the 50 as absurd. 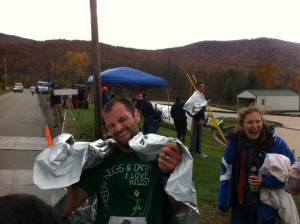 Well, I’ll leave it to the stats folks to crunch our falsified numbers during the Great Tussey Post-Game Debriefing.  Tom Cali, as is often the case, will go down as the Sandbagger of the Year.  I was nominated, as I was still able to run quick even with my IT band pain, but I decreed myself out of the running since I didn’t even run the captain legs — and I’m sure Joe would heartily agree.  Tom insists that his bio was accurate and attributes his fall surge to his purchase of a new white Porsche in July. 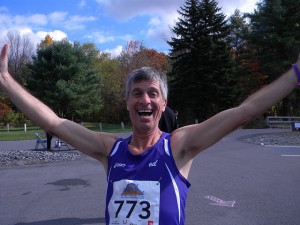 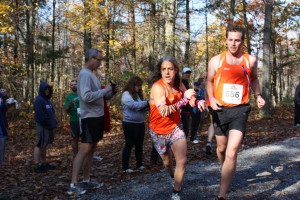 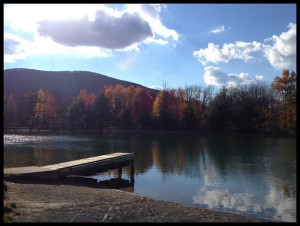 At the end of the day, nothing beats a beer by the lake after MountainBack