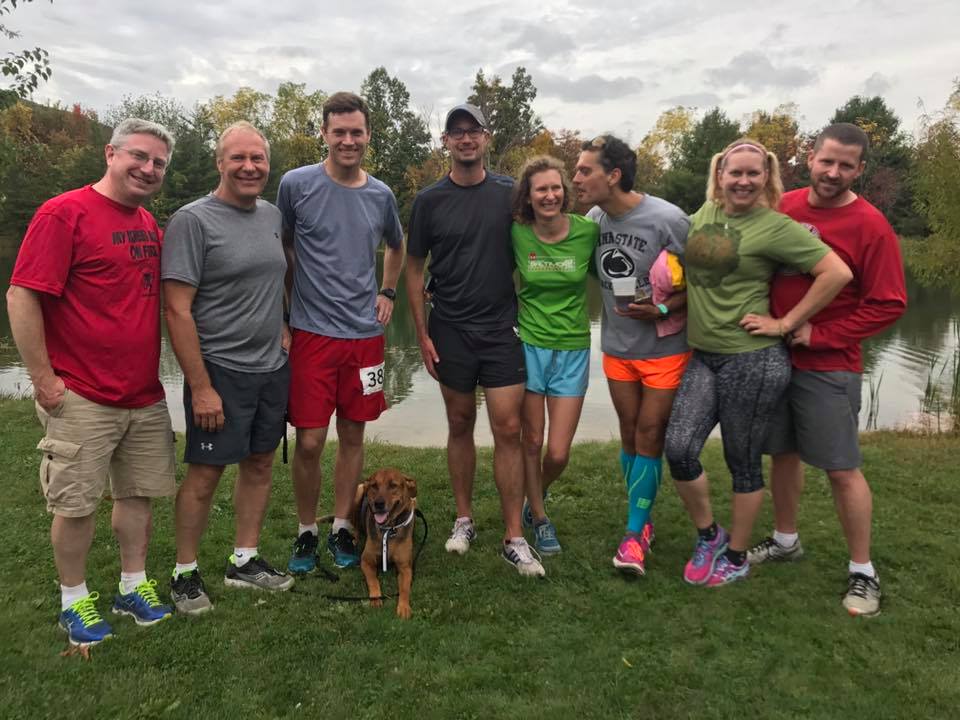 The Leftovers + our mascot Winston. Can some one tell me why Costas was trying to lick my hair. Or wearing those shorts.

Running streaks. I hate doing the same races over and over again. I do not have Aaron’s Hellgate gene. If I like a race, I’ll maybe do it three times (Boston Marathon). If I really, really love a race, maybe I’ll do it five times (Womens Half Marathon). If a race has become embedded into my soul through a larger birthday tradition, maybe I’ll do it six or seven times (Race for the Birds). But there’s only one race that I’ve gotten to every year over the past thirteen years. Because I’d rather miss Christmas. And that’s the Tussey MountainBack 50-mile relay in State College, PA. 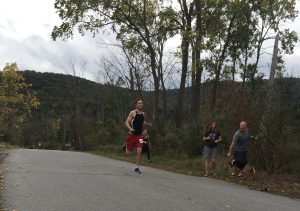 The relay teams that have the most fun have old friends and new.

Ultra runners. People are always asking me if I plan on running the entire 50-mile race. Which is also the USATF 50 mile road national championship. Let’s see, I can either spend six hours having the time of my life in a van full of friends. Or I can slog along for eight or so hours by myself, with a best case scenario that I see a couple familiar faces along the way and only really suffer for the last couple hours or so. I guess there are people who feel torn between these two options. But I am not one of them. 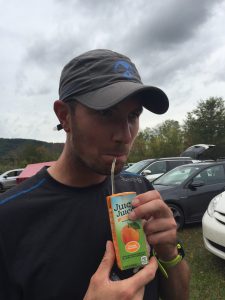 Dave couldn’t get Meira, but at least he got his Juicy Juice.

The Meira Rejects. There were several challenges at this year’s MountainBack. My right shin had started hurting a few weeks before and made me stop running. It ominously threatened to derail what was supposed to be my 13th consecutive race. But even as the shin showed signs of life, I didn’t have a fully formed team until days before the race. Renz at registration was not impressed. I don’t know whom to blame more: Meira or Cali. Cali was at least totally upfront about informing me that I was not invited to join his father-child relay team (4 dads, 4 kids). (He was unamused by my suggestion that after all these years I should definitely qualify as a Cali child.) Meir-cat took a less direct route in her exit from Team Rodentia, but it was equally effective. While I opted for a maximally inclusive 8-person team where runners can do one or two legs, Meira skimmed off the folks who were interested in running three legs each. Dividing the group of interested folks we’d amassed accordingly resulted in some winners and some losers. Dave Moore, who’d only agreed to do MountainBack only on the promise of being on Team Meira, got stuck on the Leftovers, which we decided was a little more tasteful team name than The Meira Rejects. Still, the Leftovers did not become fully viable until the 11 o’clock hour, when we got the clutch additions of Mike M. and his father-in-law Greg, thanks to the heroic efforts of Joel. 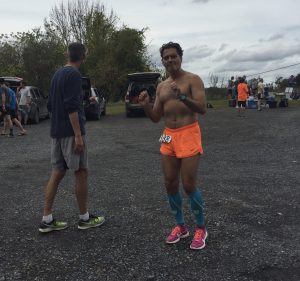 No, I’m afraid you can’t unsee this.

Dress code. The Leftovers knew it would be easy to find each other race day morning. All we had to do was locate the Greek guy flaunting the bright orange shorty shorts (Costas). [Michele H. appropriately noted that Costas and Clapper have convergent fashion tastes. There are likely convergences in personality, but their divergence in shoe choice may be more informative.] The Leftovers were in good spirits on race morning, imagining how Dave was going to crush the competition up Leg 1. Dave had off-handedly mentioned the night before that he had done a workout in which all of his 800m intervals had been under 2 minutes. But I didn’t want newbies Mike and Greg to get the wrong impression about our team.  Just so you guys know, we don’t care. 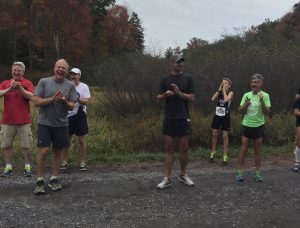 Decorum. The Leftovers made it through a full two legs before our decorum turned south. Which was mostly my fault. But was it really my fault that a portion of my Mott’s gummies were shaped like normal fruit, but a couple were clearly penises? No ambiguity here, though: as Costas was waiting at the 2/3 transition zone, I told him the story about giving Tara a good pinch in the butt when I passed her on Leg 3 last year. I still remember her jolt of shock, followed by relief when she saw it was just me. 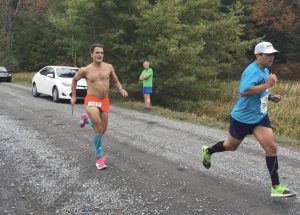 Determined to snag his 2nd butt o’ the day.

Inspired, Costas spent the next four miles hunting down Domico so he could sneak in a good pinch of baldy’s unexpectedly firm roundness. Nothing gets Costas’s blood flowing like a good ass grab, which he channeled to power up Leg 11 in the Performance of the Day for the Leftovers. Mike’s Leg 4 and Dave’s Leg 9 also get Honorable Mentions, but nothing topped the drama of Costas tearing down at the end of Leg 11 on poor Tony, who fled in terror from Costas’s approaching pinchers.

Mike and Andy relive their dramatic race to the finish. Lil Dudes barely edged out the Leftovers.

Lil dudes. As much fun as the Leftovers had in our own van, part of the fun of MountainBack is getting to interact with the other teams at all the transition zones. Meira’s team eventually pulled away, but not before I got my own Domico bum pinch as I started Leg 6, with Dommie just strolling to his car like a sitting duck. Costas mentioned several times that he received no friendly bum pinch when I shot past him on Leg 4 a few years ago. Costas and I had never been on a MountainBack team together before, and I’m afraid we were not on ass grabbing terms at that time. What exactly does it take to get on ass grabbing terms? I’m not sure. When you’re running your guts out, the snap decision To Pinch or Not to Pinch is purely instinctual.

But remarkably the Leftovers finished within 45 seconds of Tom’s father-child team. Most of the kids on Tom’s team were around 12 years of age, but they were fast and tough and I swiftly dubbed them the Lil Dudes. Having not run much over the past couple weeks on account of my injury, one of my great fears was that I was going to suffer the humiliation of being passed by a 12-year old on Leg 6, which climbs over 1,300 feet in four miles. [Next year, Joco, you can run Leg 6 for me.] I have to admit, I felt a lot worse on Leg 6 this year than I did on Leg 11 last year, even as my second leg of the day. Leg 6 is just a relentless slog. But my little pity party was sharply interrupted when I passed George, who is 97 years old. If I can climb Leg 6 when I’m 97 years old, I’m going to throw myself a birthday party every damn day. 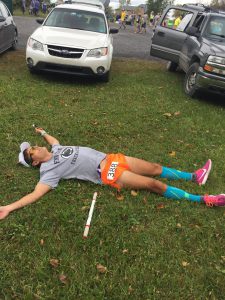 Acknowledgments. State College has amazing small-town hospitality. Big bear hug thanks to Kathy and Tommy, for making time out of their hectic lives to host me. To Michelle, for a delicious post-race dinner that felt like Thanksgiving. To Dave, for hauling my car-less ass around and helping me get back to DC. To Tommy, for running so hard he puked (okay, dry heaved).To Cali, for organizing Friday night happy hour at Zenos. To the clover gods, for helping me find two four-leaf clovers and one five-leaf clover at Colyer Lake. And to all the super cute doggies (Bud, Winston, Lucca). Everything is better with doggies.

Post-script. As much as I love MountainBack, it is clear that the race is not thriving. Despite being the 50 mile road national championship, there were less than 25 ultra finishers, male and female combined. They still get some great runners, but the field is thin. The number of relay teams also has been dropping off, perhaps due to competition from the ever-popular Ragnar Relays. For me, MountainBack is infinitely superior to Ragnar. Let me count the ways:

(1) Timing. A six-hour race is the perfect time to have a heap of fun without the time ever dragging. You can actually keep a six-hour high. The overnight aspect of Ragnar totally grinds you down.

(2) Natural beauty. The MountainBack course is so much more beautiful, on gravel roads winding through Rothrock forest as the leaves are changing.

(3) Flexibility. It’s fun having a race that can accommodate so many different breeds of runner. To have some of the country’s most elite ultra runners competing at the same time as 97-year old George. Our team was highly diverse, from Young Buck Dave to those who warned us all to ‘bring reading material’ for their legs. Part of why I wanted a 8-person team is because I like being able to include folks that just want to do one leg.

(4) Team-team interactions.  At a Ragnar race, you better like your team, because that’s pretty much the only folks you’ll be seeing for the next 30+ hours. At MountainBack, the short format of the relay means that teams don’t get spread out and get to interact at transition zones throughout the day. Not only does that facilitate bum pinches, but it also makes it an exciting race, as with Costas and Tony at the top of Leg 11.

(5) Hybrid. MountainBack is just about as traily as guys like Costas ‘it is impassible!’ will get. And just about as roady as Meira and her trail gang will get. While the PA trail running scene is thriving, MountainBack lags because it doesn’t really fit either bin. It’s too hilly and gravely for road runners looking for fast times. And it’s not the technical single track most trail runners are after. But for me,  what’s magical about MountainBack is that there’s no other race like it. It’s a unicorn.