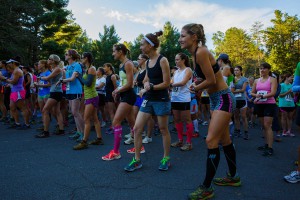 Clapper’s vision of the WHM finally comes to fruition

All of the elements were in place for a big performance.  Fall had arrived early and the crisp morning was a stark contrast to the soggy heat of previous Women’s Half Marathons, which always felt like summer’s last putrid burp.  I had increased my weekly mileage from the 40s-to-occassional50s range to 50s-to-occassional60s range during late July and August, and the added fitness had already shown at the St Paul Urban Trail marathon.  But more importantly, I had a fire lit under me.  The prospect of moving to Minnesota in 2014 was looming and I couldn’t be sure when I would be in town again for another WHM.  If I were going to leave a mark on the course, a mark that would survive the carousel of speedy young things that come through each year, it would have to be today.

The fire was further fanned at the starting line by the appearance of Sonja (pronounced SON-ja, as they apparently say in Central Pennsylvania).  In today’s cool weather there was definitely more bodily coverage among the female racers than in previous years.  Heck, moments before the race started I had to convince crazy Robin to take off her long-sleeve.  Now Sonja is a perfectly nice person, and I even had invited her to run with WUS last October.  But if my embers weren’t already hot enough, all I needed was to see Sonja traipse up to the starting line in her itsy leopard print shorts (I’ll let the pictures speak for themselves here) to kick the flame up a notch. 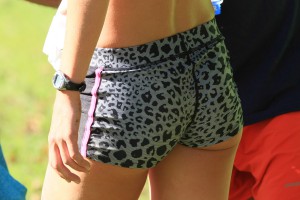 One of my habits at the starting line is to identify runners who I will take particular relish in picking off during the race, based on what they are wearing.  I won’t go into great detail about the fashion faux pas that really set me off, but Jen R and I have a very aligned views on this matter.  In fact, I think the only reason Jen still shows up for the Women’s Half is for the chance to stand at the start with me pointing out the hot young things in overcooked regalia for me to cut down.  ‘Martha, you GOTTA see this girl, you’re gonna DIE,’ Jen told me at this year’s start.  I scoured the field for the tasty morsel.  Then I saw her, walking down the hill with her father.  ‘Oh my god, Jen, I KNOW her.  That’s Sonja.’

I had been licking my lips for nine months for a chance to throw it down with Ms. Sonja, ever since last October when Sonja’s butt cheeks had gotten between myself and a much-desired post-race beer and sandwich.  Dear Aaron would sooner get between a mamma grizzly and her cub than between me and a sandwich.  I not-so-patiently waited over an hour for my male teammates-turned-zombies-from-overexposure-to-typically-concealed-female-body-parts to get their final drooling gaze of Sonja’s hind as it crossed the Tussey MountainBack finish line before they would join me at the post-race celebration.  When Sonja finally arrived they whooped and hollered like steroidal orangutans.  I hadn’t seen such decay of the male brain since the Preakness infield.  Now this was just the icing on the cake — I had spent a good part of the prior six hours of the Tussey 50-mile relay race trying to herd these drooling monkeys away from their Sonja-viewing spots they’d stamped out and into the damn van so they would be at the next transition zone before our teammate arrived.  And when I finally got those zombies loaded in, I had to listen to nothing but guy-talk where Sonja the butt of every dirty joke (pun intended). 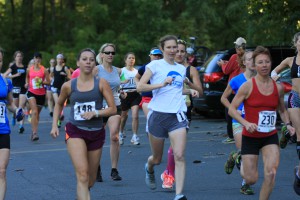 When we lined up for the start of the race today, I did not place myself front and center but a row or so back, and to the side.  Some people commented on this after the race as a display of false modesty.  But I have a style: I like to hold myself back until I’m really chomping at the bit, and then only kick it up when I can’t hold it back any longer.  This might take 10 miles or 10 minutes.  Today it only took 10 meters. 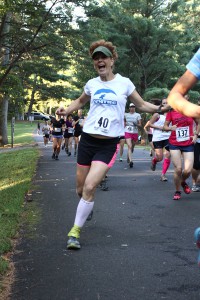 Every time I run the WHM I get nostalgic about how carefree I ran it the first time back in 2009, my virginal VHTRC trail race.  How I just enjoyed myself, utterly clueless about where the course went (Sean A told me the Doo Loop was in the second half so I was all befuddled), what the course record time was, or what skirts were back there chasing after me.  I was so confused about trail running etiquette that I got to the first aid station after the Do Loop and hung around chatting with Mario R. popping chips and soda.  After 30 or so seconds elapsed I turned to Mario, ‘Do you think it’s okay to go now?’  This year I had every reason to be more comfortable and confident: running faster, stronger, and leading by a wider margin over second place.  No matter, I’ll never be able to go back to being that relaxed.  As I told Greg Z. earlier this week, in this race I’ll always be the little fox scurrying for its life with the English hounds at its heels.

I went into this year’s race on particularly shaky footing.  Part of my doubt came from recently increased weekly mileage, which has made my legs sloggier at the beginnings of runs.   It was a foreign sensation and I worried that I had put on too many miles too quickly in August and was heading into the race with legs that were much less fresh than in past years.  The timing of my period before the race only exacerbated this sloggy dead-leg feeling.  And I’ve also suffered from a general feeling of angst lately that’s directly related to my recent faculty job hunt.  Now I know that I should be relieved to have verbal offers for tenure-track positions at two excellent universities (University of Minnesota and University of Glasgow).  But I haven’t yet committed to a university, it’s all still in limbo, and frankly I’ve found the months of applying, interviewing, and negotiating to be deeply draining.  Throw on top of that all the emotional angst wrapped up in the prospect of leaving DC and starting a new life in an unfamiliar (and potentially frigid) city.  My little train wreck of a head has somehow equated getting a tenure track position with a commitment to finally concede to entering adulthood and assuming all the responsibilities that come with it.  No wonder I’m panicking.

I consider my chronic angst to be a natural part of being a Jew, in the vein of Woody Allen, Marc Maron, and other Jewish entertainers who use their neurotic tendencies to their great comedic advantage.  Aaron of course does not suffer the same fate because his mother was not born Jewish and therefore his brain did not develop within the juices of self-doubt and neurotic terror that reside within a Jewish mother’s womb.  Hence the reason why I entirely agree with the Jewish law that dictates that Jewishness is determined solely by your maternal lineage and your early embryonic environment (as opposed to Christian law, which follows the paternal lineage).  Aaron assures me that not all Jews are defined by neurotic self-loathing, which applies mainly to the New York segment of Jewery from which my maternal lineage harks (Rye, New York, to be specific).

At any rate, it is my experience that Jewish anxiety is ingrained and entrenched from such an early intrauterine environment that it will never go away.  But unlike depression and other mental disorders, anxiety can effectively be combated with humor, which likely explains why there are so many Jewish comedians.  Rationalization can also weaken anxiety by actively recalling examples of trepidations that never came to pass (e.g., Yeah, remember that time when you really thought that you were an incompetent imbecile who was going to get fired and end up homeless and living in Rock Creek Park under Klingle Bridge?  Now did that really happen?). 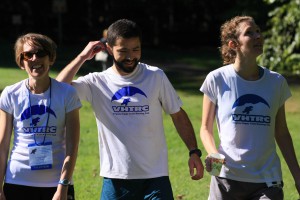 I tried to strut and look hard for this picture.  Instead I look like a dopey bird watcher.

Thanks to a combination of factors — my underlying fitness resulting from Aaron’s encouragement to increase my weekly mileage, the competitive spark triggered by Sonja’s delightful bun-huggers, and the way that seeing VHTRC friends always puts me at ease pre-race (I particularly appreciated Matt W’s wonderful surprise appearance and Jen R’s biting starting line commentary) — I fortunately hit my stride fast and early and let my little legs pound their way out of trouble.  By the time I saw Aaron at mile 6, I was a different kid, relaxed and smiling.  Other than my right hamstring, which has plagued me incessantly for nine months and hurts whenever I try to run hard, the race was a gift.  I couldn’t have asked for more.  Beautiful day, so many friends, gorgeous flowers, delicious smoothies (I generally don’t like smoothies, but I sure like Mario’s).  This truly is my favorite race. 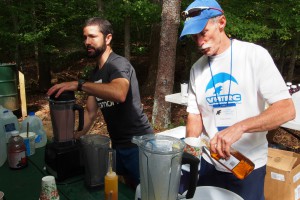 After the race I did speak to Sonja, who was bleeding from her shoulder and leg from two falls (and her arm was wrapped from a previous fall).  She’s obviously an extremely talented runner, just needs to master those rocks and roots.  I brought up some things we had in common — I had been at Penn State at the same time as she had run there, and how I recognized her from last year’s Tussey.  She replied, ‘Oh, are you the woman who interviewed me after the race?’  Pause.  ‘I believe that was a petite redhead named Tara.’  I decided I needn’t bother renewing last October’s invitation to WUS, as Keith & co probably had ten times already.  Although I might try to get her to sign up for Bull Run, as that would greatly increase my chances of winning the race outright.  Finish order: me, Sonja, pack of 30 men….. 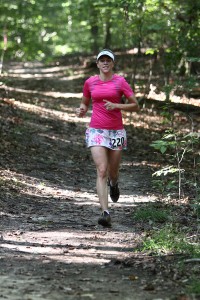 Robin also ran a great race this year (personally, I’m nominating Robin for Most Improved Runner of the Year for VHTRC — I can’t think of anyone who deserves it more), and I was curious whether Robin and Sonja’s solid low-40s times would fall in the top 10 in the history of WHM finishes.  Here’s a rough list (it may not be exhaustive, but it looks like they both fall within the top 15 and could have won in several of the years in the era BM).

4 Responses to Women’s Half Marathon