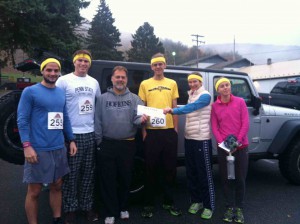 ‘So, was MountainBack about what you expected?’  I feared that I may have overhyped it in the days leading up the race.

‘Well,’ Cecily began, choosing her words carefully.  ‘When we started the trip I thought this was just going to be a fun run.’

‘And then it started to dribble out during our ride up that the DCR was actually a pretty seriously competitive event.’  We were taking the scenic way again for our drive home, winding through the rolling Pennsylvania farm lands in the dwindling light.  ‘And then when we met your friends for dinner, I kind of had an Oh Shit moment and realized that I was going to have to run really hard and fast.’

‘I bet the dead giveaway was when I suggested you warm up a lot before your first leg.’ 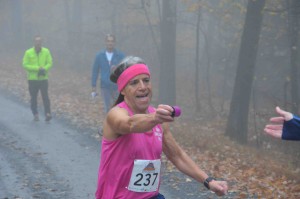 ‘But in the end, it was neither of those.  People were so laid back, even though we were running hard.’ 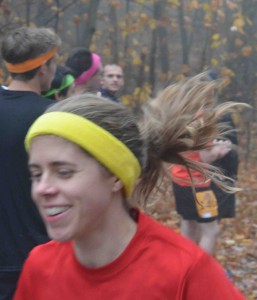 Cecily was too fast for Judd’s shutter speed

‘So you had fun?’  I’d dragged Cecily into this whole shenanigan.  I was still worried she was scarred for life and never going to do it again.

‘Yes!  You know I haven’t run very competitively since college.’  Cecily had been a star 800m runner at Dartmouth, back in the day.  We’d competed together in high school.  ‘It felt like the good ole days of 4 x 800.’ 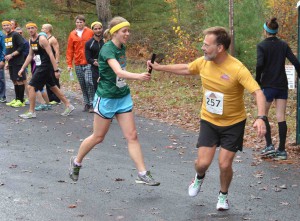 Cecily’s flying handoff.  (She has more hand-off experience than the rest of the DCR combined.  Even Team Ream is impressed.)

MountainBack this year had its share of highs: pulling my team into the lead on that tough Leg 4 hill; re-taking the lead on the thrilling bomb down Leg 10; throwing my arms around Alex at the finish line, after he’d held onto our team’s lead by the skin of his teeth.  But nothing was more satisfying than knowing that Cecily had caught the magic of MountainBack.  That one race where you run against your friends with the fiercest of competition, running your guts out, whispering taunts, and then share hugs and beers at the end. 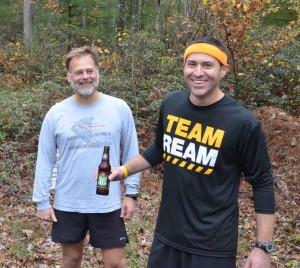 Dana begins cozying up to Mike ‘Beer Distributor’ Martin’s team halfway through when we discovered a catastrophic error: KID TEAM HAD NO BEER. Amateurs…….

This year the DCR had new Commissioners: Cali and CJ.  They mixed some things up: we had the draft just a couple days before the race, to minimize pre-race sandbagging.  This negated some traditions: ordering matching singlets, team names along a theme, the weeks of pre-race trash talk.  But it avoided a key draft problem: injury dropouts and ringer substitutions. 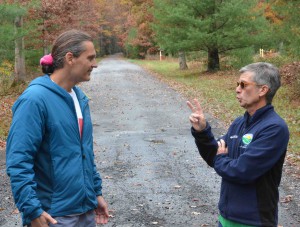 Most of my team this year was newbies.  And, as Sheakowski noted in the MountainBack parking lot, we were the ‘Kid Team’, with an average age that was at least a decade less than everything other team.  Whenever a team wins the DCR, there’s typically an ensuing onslaught of sandbagging accusations.  But the Kid Team didn’t have any clear sandbaggers; everyone just ran solidly.  I took one gamble pick in the 4th round on Andy Bogus, who was a last minute sub and didn’t have much of a bio, and ended up churning out a clutch run up the killer Leg 11.  Drafting by phone is always a challenge.  You have no idea who’s been picked already.  You don’t have a chance to meet any of the new people.  But as Cali was listing off the folks still remaining in the 4th round, I yelled into the phone ‘Give me Bogus!’ 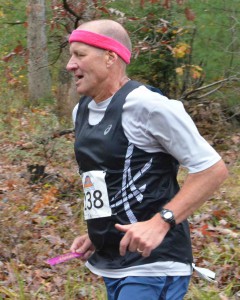 Sheakoski thinks up ways he can accuse Cecily of sandbagging

The DCR was made more complex this year by the fact that every team had a different leg order.  So you had a lot of mismatches: captains running against 4th round picks on Legs 5 and 11, last-round picks against 3rd-round picks on Leg 2 and 8, etc.  So there were likely to be a lot of lead changes.  Patrick shot the Kid Team out to the lead on Leg 1, and we were in the lead for a larger percentage of the race than any other team.  At various times the Pink team (Costas’s team) and the Orange team (Zimmerman’s team) took the lead.  But on Legs 4 and 10 I managed to wrestle it back, and give Andy and Alex enough cushion to hold off Mike M, Zimmerman, Ken, and everyone else on their heels. 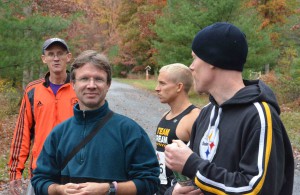 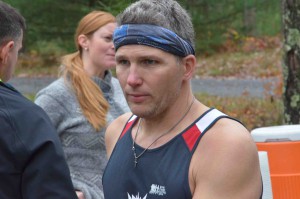 Zaffino’s game face (must get past that point in the 50 when you wonder what possessed you to run the whole thing…). 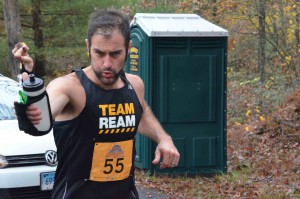 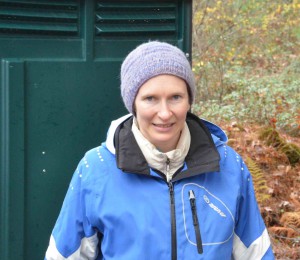 This was my 11th consecutive Tussey MountainBack relay, and my 9th consecutive year of DCR (for more information on the elaborate Draft Challenge Relay, see blog posts from prior years).  But my first DCR win.  We also won the Standard Men’s division, which was a larger number of teams.  But we all know that the only thing that matters is how you stack up against the other DCR teams.

Overall, I liked a lot of things about the new Cali/CJ DCR.  Thank god I don’t have to buy another stupid singlet I’m never gonna wear.  And the lack of last-minute substitutions kept the competition a lot more fair.  No one can really hurl the customary sandbagger accusations at the Kid Team.  We just had a good strategy: (a) stack our front end on Legs 1/7 and 2/8 with speedsters Patrick and Cecily of Penn State men’s soccer and Dartmouth track team fame, respectively; (b) ask Dana to do his best to keep us in the race on Leg 3/9, knowing that he’d be running against runners picked higher in the draft order but if he kept us within sight of other DCR runners, the marmot’s competitive instincts would kick in; (c) sure enough, dangle some DCR headbands in front of me and I’ll track them down on 4/10, Taiwan jetlag be damned; and (d) count on Bogus and Andy’s pure toughness to clutch onto shrinking leads.

Going into Leg 10, I informed my team, ‘Now guys, you all made me work damn hard on Leg 4……’  Catching Meira and Costas on uphill legs had been grueling work.  My training involves neither (a) speedwork or (b) hills, so MountainBack is always a hard jolt to my system.  ‘So you all are going to give me a nice cushy lead on Leg 10.’  We’d been in the lead since the top of Leg 4, and a nice float down Leg 10 seemed like an apt reward for heaving my lungs out on Leg 4’s steep hills.

‘Chri-kies,’ I muttered as the Orange team came into view.  Pink team was right on our tail.  They were going to make me do it again.  And if we were going to win the DCR, putting us in the lead wasn’t enough.  With mismatched legs coming up, I had to give Bogus and Alex a couple minutes of cushion.  As I went by an ultra runner, he yelled, No one else running like that out here.  My hamstrings would be sore for more than a week.  But I gave the Kid Team the last push it needed.  Bogus held tough on Leg 11, a monster performance for a 4th round pick.  Alex put it all out there on Leg 12.

My fears about the Kid Team had been vanquished.  That Bogus, in his baggy pajama pants and oops-I-got-lost-mountain-biking-yesterday-and-did-way-too-many-miles had no idea what he was getting into on Leg 11.  That Cecily would hate me forever for dragging her into all this.  That I’d be crawling after a long, sleepless trip to Taiwan and back. 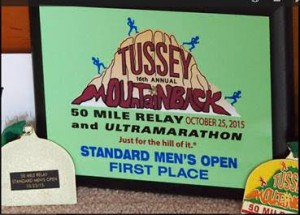 As Cecily and I drove home to DC, I found myself admitting that a side of me still very much misses State College.  We had been there less than 24 hours, but it was enough for her to know exactly what I meant.  It might be tough to find a decent Ethiopian restaurant in the Happy Valley.  Or catch an Ariel Pink concert.  Or race with 45,000 people around the Mall.  But there’s a coziness, and an ease of living.  The way everyone was able to convene impromptu for happy hour at Toftrees (if we want to do something with friends in DC we have to plan weeks in advance — there’s no just scootin’ across the city).  The way the shoe guy at Rapid Transit, Brock, knew who I was and had shared friends, and helped me and Cecily sort through the entire basement of clothing racks to find just what we were looking for. 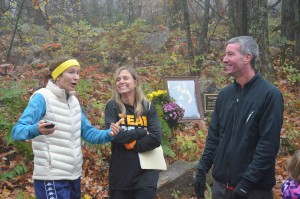 And of course how can we omit Luna and his wonderful doggies and garage apartment?  Sure, this year we had to contend with a lot of mouse poo (seriously, Luns, we got to get Leda in there).  But what’s MountainBack without a shower that ends with accidentally smearing mouse poo all over your wet body (as it turned out a little mouse had found the warm wrapped towel a delightful place to relieve himself)?  If there had been a live feed of Luna’s apartment the night before MountainBack, you would have seen me and Cecily shrieking and laughing, as I had taken a blanket from the upper reaches of the closet (‘no way a mouse could get all the way up there,’ Cecily had assured me) and thrown it onto my bed, sending pellets of poo flying in all directions across the apartment.  After scraping up all the pellets, we determined that one bed was 100% poo free, and Cecily and I tucked in together under the sheets.  Because friends don’t let friends sleep in mouse poo. 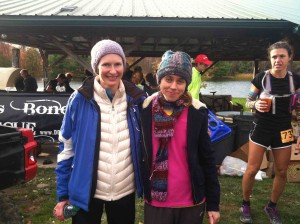 Most of these photos were kindly provided by Judd Michael.