After Sarah Wright and Scott Brewer got married on July 1, 2011, they enjoyed two nights at the Marriott Wardman in Woodley Park (just a stone’s throw from the WUS house!) and then embarked on a unique honeymoon…..in Milwaukee, WI…..along with their good friend Martha.  I mean, who wouldn’t want me on their honeymoon? 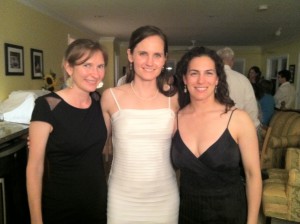 Best friends from high school: me, the bride Sarah, and Rosie

Yes, Scott was a good man to consent to hand over his new bride to me for the week of Summerfest, a giant music festival held during the first week of July in Milwaukee, where Sarah and Scott currently abide.  For the record, Sarah and I had bought tickets to the Black Keys concert long before Sarah and Scott had set a wedding date, so I didn’t feel too badly about hijacking Sarah.  And you had to admit that the Black Keys concert could not to be missed — not only did we get Patrick and Dan (Patrick drummed so hard he looked like he was going to collapse at the end), but we got the ethereal Florence + the Machine as the opening act as well.  [Cage the Elephant also came on first with some high energy performances of ‘Ain’t No Rest of the Wicked’ and ‘Shake Me Down’ — I’ve never seen a guy crowd surf so much]  The (entirely sold out) crowd was so seduced by Ms. Florence and her swirling black cape that we all obligingly hopped like hypnotized bunnies when she requested it for her scorching finale of ‘Dog Days are Over.’  She could have asked us to hop on one foot and we would have.  Pretty tough to follow up on that kind of voice, but the Black Keys would not be outshone.  The finale of ‘Strange Times’ and ‘I Got Mine’ from the 2008 Attack and Release album was…..was…..man, I don’t know how to write about music any better than I know how to write about wine….if I tried I’d end up writing like some schmuck about oak resins and tints of moose bladder.  Let’s just leave it that it was GOOD. 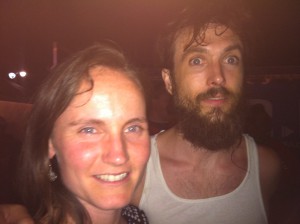 My iPhone flash was a little bright for Mr Sharpe

The next day we saw Edward Sharpe and the Magnetic Zeros, another show we were very psyched about.  Unfortunately, Katy Perry was occupying the Marcus Amphitheater, so Edward & co were on a stage that was way too small for the overflowing demand.  In a sharp contrast to the very comfortable bleacher seat viewing Sarah and I had for the Black Keys (who needs real seats when you stand the whole concert anyway?), Sarah and I found it considerably more difficult to enjoy a show when we were smushed up against a fence, standing behind short people but who had flipped up their hat brims as some kind of fashion statement (or ‘Screw all you folk trying to see anything’ statement).  Also, whereas smoking was prohibited at the semi-enclosed Marcus Ampitheater (although there was no shortage of pot — I think Sarah and I got second-hand highs), Sarah and I found ourselves with cigarette smoke being blown into our faces throughout the show.  The fact that Sarah and I so enjoyed the show despite the less-than-desirable circumstances are an absolute testament to the charisma of Edward, Jane, & co — I think I’d keep tapping my foot to ‘Home’ even during dental surgery.  As if to make it up to squished fans like Sarah and myself, Edward came over to our fence after the show to meet and greet.  He was giving hugs to all the girls and high fives to the guys (although I declined both — I don’t care how good his music is — he was dripping in sweat and, well, I’m somewhat feline when it comes to things like that).

Rosie came up for the weekend and our Summerfest finale, which was my racing the Inaugural Summerfest Rock ‘n Sole Half Marathon.  The race was being touted for its big prize money ($22,000 in total payouts), a scenic out-and-back over the Hoan Memorial Bridge, and starting and ending on the Summerfest grounds.  Sign me up!

Unfortunately, for many the race was a complete disaster.  As of today, the race director is reported to be ‘seriously considering refunds’ (MSNBC) due to poor organization and management during what turned out to be a sweltering day that forced the race to declare a Code Black and shut the course down early.  I was fortunate to be at the front of the race, safely finishing before the closure and getting my water before they ran out (whereas I didn’t take a drop of water at the National half marathon in March, I loaded up on water and gatorade at each aid station, chugging down as much as I could — people were dropping like flies in the heat).  My only complaint was that initially my name wasn’t in the initial posted results, making me wonder whether they would give me the $200 in prize money that had been promised to the 7th place finisher (I sent them some emails though and now I’m listed so hopefully the check will come — drinks on me next WUS!), and that there were no dropbags, so finding Sarah and Rosie at the end of the race without a cell phone in all those crowds was quite a challenge — nothing like a hot, tired runner wandering around asking where the Human Lost + Found is…..  But I have to say, Sarah and Rosie were awesome spectators, and Sarah even jumped in and ran with me for a half mile or so.  My (perennial) other problem was that I didn’t have time to pee before the race (the lines are always SO long for the portopotties) and after pissing myself at National and being in the portopotty when the gun went off at the Race for the Cure, I decided just to hold it and use one along the course — but that definitely added ~30 seconds or so.  But coming out of the john, still pulling up my shorts (some people got a good semi-butt flash), my GU fell out and I had to run back and get it.  Some very kind Midwestern dude picked it up and with a little wink as he handed it to me said, ‘I think you’ll be needing this.’  That dude totally made my race! 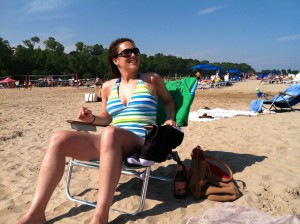 Rosie has much better ways for dealing with Milwaukee heat waves than running 13.1 miles

Post-script: Rosie & Sarah will be guest-appearing at the 2nd Annual Martha Birthday Beer Mile, Friday, April 27, 2012.  They greatly enjoyed Bobby’s video and are looking forward to meeting the WUSsies.