Lobsters and eagles and ponies, oh my! Birthday Wish

I’m not sure if others recognized just how much was at stake for me at Promise Land: essentially, my entire future in trail racing.

I’m really not being overly dramatic here. For over two years it has occurred to me that my stomach is simply not cut out for the quantity of eating required for ultra trail racing and that I should be done with it. Every time I tried to race a long trail race, it resulted in my stomach decorating the trails, aid stations, and finish lines with gastrointestinal goodness. First it was Highland Sky 2011, then Holiday ‘Pukefest’ Lake 2012, and most recently Willis ‘Pukefest II’ River (aka Swinging Bridge).

Now I am not one to quit a sport lightly. In all my years of playing soccer, basketball, field hockey, show-jumping (ponies), and of course running, the only sport I ever quit of my own volition was the Stanford women’s rugby team. After a few slaughterfest games filled with dislocated bones (and worse), I decided to take the route of self-preservation and not try to prove anything.

In many ways, ultra racing was beginning to feel a lot like Stanford rugby: a continual pummeling that was breaking my spirit.

Promise Land had all the trappings of beautiful, fabulous run — if I could not enjoy the day out there, ultras were likely to go the way of rugby. I have no interest in self-mutilation. I know that for a lot of runners trail running is a poetic self-challenge of mind and body, man against mountain. I approach running more like a child going sledding: the only reason I’ll slog up the hill is so I can whiz back down the (ideally very technical) slope.

‘Put it in your mind: twenty bobbing ponytails,’ Aaron instructed. I closed my eyes and imagined a field of female runners leaving me behind up the first Promise Land climb. ‘Let them go,’ I half-whispered to myself. That essentially was the game plan: turn the competitive nozzle to zero and approach it like a fun run.

That plan was actually pretty darn easy to fulfill when the course starts with a three-mile climb up a road. As I’ve mentioned before, climbing for me is like that plate of broccoli you had to gag down as a kid in order to have your dessert (ie, the descent). The 5:30am start of Promise Land was dark, so I never quite got my image of the twenty bobbing ponytails ahead. But I knew I was somewhere mid-pack.

As Keith, Aaron, and other WUSsies had promised, PL was BEAUTIFUL. I *loved* the course. My favorite so far. Spring was so ripe in the air, I half expected find bambi and thumper and skunk somewhere strumming banjos amidst the purple and red trillium. The weather was ideal — I think I told Aaron at one point that the air felt like a massage. But what really made the course for me was not just the scenery or weather, but how varied the course was, how much it switched up between open grassy thoroughfares to narrow wooded single-track, such that the scenes were always changing and varied. To complete the seduction, the rocky technical downhills were to die for (some of the more road-runner-inclined may have thought this literally).

Of course, the ultimate highlight of the day was when Aaron decided to run with me. I’m not sure quite what possessed him (although Aaron is pretty darn sharp, and probably realized that it was in both of our interests that I have a splendid day). But when I stopped to do some early shoe surgery after the first climb (my heel pads were sliding around and hitting my arch uncomfortably), I was beaming my brains out when Aaron stopped to wait for me. As a very social runner by nature, the second highlight of the day was coming across Greg Loomis mid-race, who had self-declared ‘blown up’. We took a little pace off to catch up with Greg for a bit. The clover gods highly approved of this, and rewarded us with twelve four-leaf covers. I held onto them for a couple miles, but gave them to Aaron when I had to stop to poop, and by the end of the run his pocket had converted them to mushed green bits.

Still, the clovers did their magic, and my stomach hung in there. I could feel it beginning to turn a bit, and food became increasingly less appealing. But what saved the stomach was actually the infamous climb up Apple Orchard Falls, which was so beautiful I almost didn’t notice how much we were ascending. Having that much time to walk gave me a cushion to slowly get some morsels of a margarita clif blok down (courtesy of Brian G.). As much as I dislike the climbs, they are at least an excellent time for coaxing down some nourishment bit by bit. In all, I got down 5 peanut butter crackers, 2 GUs, 1 margarita clif blok, most of my bottle with GU and carbo-pro, and handfuls of saltines and pretzels. I tried to have less of the sweet stuff, and I haven’t been able to eat my magic papaya since I barfed it up at Willis River. But I love the peanut butter crackers. Except that my hydration system didn’t quite work and getting my drink bottle out of the back of my Nathan was an ordeal that required Aaron’s helping hand (I’ve now bought a 1.5 liter bladder, so we’ll see how that goes).

Aaron had decreed that he would run with me as long as I left him when his heels began to fail him. At first I protested at this, but eventually agreed, and at Apple Orchard Falls we parted ways. At the aid station at the top of Apple Orchard Falls I drank a bit too much water that left my stomach gurgly, and I babied it for the next stretch. But the downhill was too much to resist, and let it fly to the finish. I couldn’t wait to tell Aaron that I had a good run. No pukes!

When I crossed the line I was still very fresh. Horton quibbled that I should have run faster, but all I could gleefully declare was that I hadn’t puked! I was so bouncy and happy that I tore back up the hill to find Aaron, who was only a couple minutes back. My quads were spent from the long downhill at the end, but I couldn’t recall the last time I had felt so pain-free and strong after an ultra. I also can’t recall the last time I so enjoyed a finish area, where I had the chance to down a burger and catch up with fellow runners: Alison, who won the won’s race (and like me is struggling with a chronic hamstring injury) and Holly (who is three months pregnant and STILL was planning to run the race until a last-minute relative bailed on babysitting) and of course all the WUSsies: Mario, Keith + Tracey, Doug + Kerry, Robin + Adam. Apparently this year was PL-run-with-your-husband/boyfriend day, and D+K and K+T and Aaron and I all ran as pairs, not an easy feat but one we all seem to have survived unscathed. We sadly had to leave before getting to see Sean and the Andrish clan — it would have been several more hours before Jack and Shannon came in. 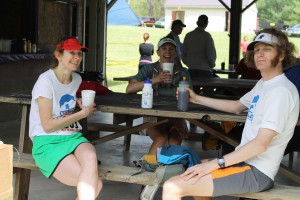 But possibly there is a different approach to ultra running. I think when I began to cross over from road running, many around me thought that my speed over 5k-marathon distances would translate well to ultra running, especially since I love technical trail. Their encouragement has always been well-intentioned, but I’m such a crap climber, and the ability to climb is so important in ultra running (Sean will try to convince me otherwise, but his walking up hills is still faster than my running….), that I’ve accepted that I’m best suited to faster road races. Not that I would ever go back to just being a road runner — trails are way too much fun. Just that I would put my competitive energies into road running and leave the trails for the enjoyment of it and not get hung up on breaking records or chasing podiums. You know, it wasn’t that long ago that trail running was much more romp than pomp.

See you at Highland Sky!

My sleepy early morning eyes were entirely befuddled by the PL port-o-potty signage. I really hoped this wasn’t an omen for my race.

One Response to Promise Land: A New Hope