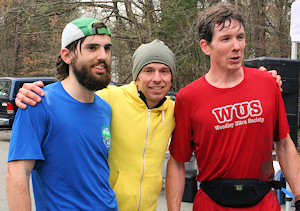 I received my glorious crimson WUS shirt today.  I love it, it’s silky and light and the women’s medium fits perfectly.  I normally race in singlets (I know, very road runnery of me), but I will race in the WUS shirt with great pride.  If I have a piece of tape, that is.  I know it’s just cheeky and cute, but I cannot run with ‘You are being beat by a WUS’ being broadcast to those behind me, the negative message will be the death of my karma.  And as with most of me, my karma is very delicate: it’s all part of the whole no-watch, no-GPS, no-heart monitor, no-counting miles and seconds thing.  It’s about waving and saying Good job to the two girls who were kicking my ass after the turnaround at Charlottesville even though they said nothing back.  I have a visceral reaction against shirts like those that read, You are being beat by a girl, which seem to defeat my years of effort to acclimate guys to the idea of getting passed by women so they don’t do that stupid surge and block thing (yes, I mean you Anand Reddi, BCC High School class of ’99 — don’t think I’ll soon forget you stonewalling me in that 3200m).  Believe me, the Marine who runs MCM carrying the US flag does not wear a shirt saying You are getting beat by a dude carrying a flag.

My trail racing career was actually launched by a visceral reaction against a message on the back of woman’s shirt.  I was a total road runner at that point and merely planning to trot through the gnarly 18.9 mile Escarpment Trail Run in the Catskills of New York as a more adventurous training run, as I had never done a trail race before (I had no idea what I was doing – I ended up 4 hours in the July heat with no water bottle — I thought aid stations every 7 miles sounded like a lot).  I trotted along the first 5 miles leisurely, enjoying the mud and rocks, and loving that we were allowed to walk up the hills – go figure!  But at some point I found myself behind a woman (later identified as Sheryl Wheeler) in a shirt that had a message on the back something along the lines of ‘Jesus has made me fleet as the deer’.  My first reaction was that this was a boldface lie, and an insult to the lithe deer that could dust this lady any day.  As I thought about it, the line bothered me more: it would be better said ‘Jesus has made us fleet as the deer’ – I mean, who was Jesus to pick favorites, we were all out here running.  As an evolutionary biologist working on my PhD at the time, I started coming up with my own lines: ‘Darwinian selection, meiosis, random mutation, genetic drift, and environmental conditions have made me an f-ing little tiger that could rip a deer to pieces’.  I have nothing against Jesus, in fact I consider myself a fan (even as a non-practicing Jew), but as an evolutionary biologist I had been dealing with a lot of religious zealots who thought I was the devil for trying to improve human health by understanding how viruses evolve, so this touched a nerve.  And in general, I don’t care what people believe as long as they don’t get flaunt it in my face and insinuate that their religion is somehow superior to mine (as a 5 year old my born-again cousin told me I was going to hell).  As a rule of thumb, I’d like to keep trail-running as egalitarian and religiously neutral as possible.  To defend the virtues of my own spirituality, or maybe to prove that Jesus liked me too~, I quickly passed the Deer Lady and raced all the way in, collapsing over and over in the last 4 miles (there is a lovely youtube clip of me biting it here) because trail runners in July really should take water bottles, but crossing the finish line in 1st.

Bringing us back to the present, I’ve been trying to come up with what kind of appropriate, non-offensive personal message I’m going to tape on the back of my WUS shirt.  I thought about ‘Ditch the watch,’ which really does capture the essence of my running philosophy, particularly after witnessing Knipling’s bloody foamy wrist tonight, savaged by his man-eating GPS (and well as several runners last night admitting that if they can’t find their GPS they will forego the run entirely – I think a running fairy’s light goes out every time that happens).  I think that ‘See you on the Uphill’ could also be my epithet, assuaging all the runners I’m speeding by down the hills that they will soon be seeing me plodding like a lame ox as soon as the angle of the slope reverses.  But I really like ‘CAUTION: This WUS has gas’, a nice little double entendre that is simultaneously intimidating and self-deprecating.