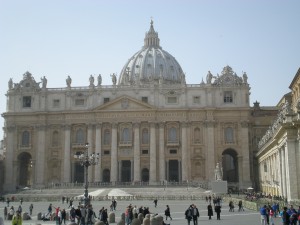 Passing by the Vatican en route to more pizza (with prosciutto)

When Isabella’s father told me that his stomach had become a ‘pig graveyard’, I could only laugh and assure him that the same had become of mine.  There are many ways to enjoy the Pig in Italy – pasta carbonara (with bacon), sandwich with prosciutto and mozzarella di buffalo, pizza with speck and funghi (mushrooms), or simply soppressata or jamon straight up as antipasti.  In fact, if there is something on the menu that you do not know the English meaning of, there is an ~68% chance that it is just another slight Italian twist on how to cure a pig.

However, I consider my excessive consumption of pig on this trip appropriate, given my reasons for coming to Rome in the first place.  The International Symposium on Respiratory Viral Infections (ISRVI) had provided me with a whole of 10 minutes to give my talk on the ‘Spatial dynamics of human-origin H1 influenza viruses in North American swine’: in other words, how the economic calculation that it is cheaper to truck pigs from North Carolina to Iowa than to truck all the corn needed to feed them is spreading influenza viruses in pigs like crazy in the US, resulting in all kinds of new genetic recombinants.

I am sure that you have noticed that I have not yet made any allusion to running in this race report.  Yes, I am afraid that eating, drinking, and socializing (EDS) figured far more prominently during my 10 days in Italy than anything that can be described as running.  In my justification though, my time in Rome was being half-subsidized by US taxpayer funding, so anything less than full-on EDS would have deprived Uncle Sam of his due share.  And in my further justification, my hotel was not quite situated in a location that could be described as conducive to running.

It takes an awful lot for me to deem a place unsuitable for running.  I regularly run through snow, ice, mud, wade through streams, and sweat out code red DC summers.  It really takes a lot to put me on a treadmill, my ultimate sign of defeat.  At the last ISIRV conference in Bangkok, I ran around a square with four ~10m sides in the 90+ degree heat dodging attack peacocks, much to the amusement of the resident hotel gardener, before relegating myself to the more appropriate treadmill.

But while feisty peacocks are one thing, packs of attack gypsy dogs are another.  Bypassing the hotel concierge’s highly recommended treadmills, I set out in the only direction that did not lead directly onto a highway ramp.  The dreary apartment buildings reminded of the settings of unflinching violence in the Italian organized crime film Gomorrah.  Within minutes I found myself in the neighborhood gypsy trailer park, which unfortunately stood between me and what appeared to be the only green space in the area.  Determined to explore the green hills, I skirted past the encampment of tents and rusted trailers, picking my way along a hillside that must have been their trash depository of choice, and managed to be noticed only by two mangy mutts that barked menacingly but did not follow me.

The Green Space was not the Land of Eden I had hoped it would be.  Muddy plowed fields with highly uneven footing were interspersed with thickets of thorns, and the hotel staff would eye disapprovingly when I returned to their red carpet with legs of dirt and blood (at least I took my shoes off before entering).  But I would have returned to the hills regardless had it not been for the packs of half-wild dogs – it turned out those two mangy mutts had quite a lot of friends.  I mixed stern, steady gazes with getting the hell out of Dodge as quickly as possible and averted any run-ins with the animals, but when I safely arrived back at the hotel I could only think one thing: Tomorrow we are making friends with the treadmill.  Oh, and I am definitely getting a rabies vaccine before I go to Nepal this summer.

Running on treadmills is anathema to my sense of what constitutes running.  For me, running is freedom and relaxation, giving the body free rein to move exactly where and as quickly as it pleases.  I cannot enjoy biking because my feet feel tethered, confined to the pedal’s small defined orbit.  When biking, it matters not if the breeze is in my face or the sun on my back, my whole body feels trapped between bars and mightily unhappy.  So you can imagine what kind of contorted expressions my face makes about the treadmill – like a kid’s over a plate of broccoli.

But I am trying to get my butt back in order after Catawba shredded the poor thing, and I knew a couple easy miles on a treadmill would help loosen things up a bit.  So I put on my most relaxing music – Neil Young’s Unplugged has been my calming music of choice recently — and put the treadmill on to just a slow patter to see if the feet would take.  It was helpful that the readings were all in kilometers so I did not know how slow I was going.  I let ‘Harvest Moon’ coax me into an easy rhythm and tried to distract myself for quite some time with anything on hand: Italian TV stations, the lizards darting about outside in the rose garden, the sound of the broom sweeping in the song.  Okay, so Quite Some Time does not mean the same thing on the treadmill that is does in other real life settings – time on the treadmill passes at about the same rate as, say, during a rectal examination.  I lasted 20 minutes, which felt like a total victory.  Back on the floor, I let my head whirl around the room a bit – the treadmill always makes me so dizzy – which fortunately distracted me from thinking at all about what a pathetic workout I had just completed, definitely fewer kilowatts than Old Lady Aerobics. 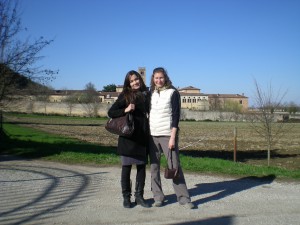 Isabella and I at a monastery outside Padova

I had a second chance to revive my running doldrums during the second half of my Italy trip in Padova, where I was visiting the illustrious Alice Fusaro and Isabella Monne, who are described as part of the Charlie’s Angels team of gorgeous Italian influenza researchers at the viral diagnostic reference lab in Padova, just west of Venice in the Northeastern part of the country.   But priorities re-orient — why go running when you can shop with the beautiful Isabella in Treviso for a smashing dress to Alice’s wedding? 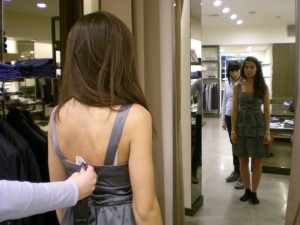 Who needs running when there is dress shopping??