the coldest race i ever ran was august in montana MountainBack No. 10 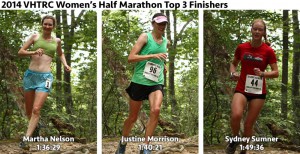 ‘Martha, are you running the race?’ Toni asked incredulously.  As of a week ago, I hadn’t yet signed up.

‘Good question.’  It was 8:13 am.  The race started at 8:30.  I was still torn. I wanted to run, but my poor body had barely eked it through Montana.  My chronically injured left foot, right IT, and right hamstring had all been whimpering all week, waking me up at night.  I needed a good rest.

But I also needed something else much more.  The year 2014 was supposed to be auspicious.  I had trained harder than ever, doing long run after long run leading up to Bull Run, cross training in the pool and on the bike.  My work productivity was through the roof — I’d never churned out so many first-author papers.  I’d scored interviews at top universities — ACC, Ivies.  And yet, somehow I felt like I just couldn’t catch a break.  Like I when you’re caught waiting at an road intersection for that gap in traffic that never comes — as if the traffic flows were perfectly timed against you in both directions.

It started with little nicks, absolutely trivial things like the VHTRC awards ceremony in February.  But the nicks started adding up — the unfathomable whims of the Stomach Gods, the Search Committee Gods, the Editor Gods, and the IT Band Gods.  I just needed something, anything, to throw me a bone before the year was up.

My warmup in Fountainhead on race morning had been lackluster.  I had been entirely unsuccessful in convincing my legs to do any strides or show any pep.  But then Toni mentioned Juanita’s Cantina at the Wolf Run Shoals aid station.

‘Okay, that settles it,’ I pronounced.  ‘I’ll run at least until I get to the tequila shots.’  I removed the gel pads out of my shoes that had been so troublesome in Montana.  I took a last stand-up pee in the woods.  Something about spreading your legs and peeing like a guy always gives me a little courage.

During the pre-race rendition of ‘Happy Trails,’ I noticed that I couldn’t find any of the other speedsters I’d expected to show up — Justine, Holly, Ragan.  Maybe I would get a break.  But when the race started, Justine had snuck in.  Justine was the one person Aaron had admitted could ‘give me a run for my money’ at the WHM.  The race was on!

Keith manages to stay ahead

I was very happy that Keith was rabbiting for me and Justine, and we headed up the road chatty and relaxed.  It occurred to me that maybe the best plan would be to just run with Justine for a ways.  The two of us had already separated from the rest of the field, we could just trot together.

But as soon as the course kicked us into the woods I took off.  A part of me was like, What the f^&k, what are you doing?  But I had an overriding instinct to separate myself and run my own race.  Sure, it sucks being the rabbit out front, knowing that Justine is lurking back there ready capitalize on any misstep or slackening.  But if I was going to come out and race, putting my injuries on the line, I wasn’t going to race tepid.

I was sweating bullets by the time I got to the Do Loop aid station, and had to drop my shirt there.  It wasn’t terribly hot, but the day’s upcoming rain was hanging in the air, and the humidity was high.  I was all-business in the aid stations, not much smiling or joking.  One issue with being first is that the aid stations are never ready for you, so I didn’t even get handed a water or gatorade when I went through at the Do Loop.  But the thing I love about the Women’s Half is that I know people at each and every aid station, and I always know I’ll get a lift from seeing Joe and Michele at the first aid station.

Now, the Do Loop is known for its little needles of steep up and downs.  But when you’re running something like Bull Run or Magnus Gluteus, you’re running slow enough that you don’t realize how technical the trail is.  When you’re racing the Women’s Half, it actually becomes a real technical challenge.

As you all know, things that remind me of ponies make me happiest.  What I love about technical trail is how it brings me back to pony jumping.  When you’re riding a horse over a complex set of jumps, you don’t actually want to be looking ahead through your horse’s ears.  Even as you’re going over the jump you need to already scanning for the next obstacle or you’re going to get a bad line.  The temptation is to focus on the task at hand and just react as obstacles fly at you.  But in trail running, pony jumping, or even mogul skiing, the key is not to be reactionary but to keep your eyes up and surveying.

Getting my plantar fibroma on my left foot in October had put a severe crimp in my technical train running.  I don’t like running boring flat trails.  I get mopey.  I bought my first pair of Hokas in June, with the hope that the extra cushion might protect the plantar fibroma and I might be able to return to some rocks.  I’m not wild about the Hokas (my heel would slip up in the back, causing heel pain), but with their fatty cushioning I did find myself in August, for the first time in eight months, starting to dance a bit on rocks again.

Toni and I were having a debate before the race about what sucks more: being at the front of the pack running your guts out, or being in the middle of the pack where it’s tough to run your own race.  I think we both had compelling arguments on either side, and I left it to Grand Arbiter Aaron to make the call.  Showing his fair and reasonable judgment, Aaron made concessions to both sides: on one hand, Aaron ceded with Toni that it was likely tougher to have to run the WHM in the middle of the pack than to run towards the front in positions 2 through, say, 5, or maybe 10. 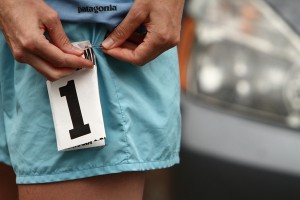 Oh, the travails of the front-runner!

But Aaron, having many times led a race himself, had to acknowledge that there is a pain and discomfort that is unique being the front-runner that no one else in the race knows.  It is more than a physical pain, it is a psychological terror to feel the hounds pursuing and be running for your life.  Sure, in many longer ultras the front-runner is so far ahead that they’re not feeling the heat of the chase.  But that’s never the case at a half-marathon distance.

Aaron was taking photographs near Fountainhead, around mile 8.  Since his camera time-stamps his photos, we know that I was exactly 1 minute and 5 seconds ahead of Justine at that point.  I’m smiley and happy to see Aaron in the photo and feeling comfortable.  But I never stopped feeling the chase.  I shot through aid stations, never lingering.  I put some heat on over the last five miles of the race and ended up finishing 4 minutes ahead of Justine.  I was well off of my course record from last year in 1:36.  But the conditions weren’t as good as last year, and overall it was a deeply satisfying race.  Justine is clearly one of the most talented female runners around, and someone with the speed and strength to be a threat at any distance.  I can still feel all of my injuries, 1-2-3, but they stayed pretty quiet during the race, and it was a major breakthrough to be able to dance on rocks like old times.  I couldn’t fly down the hills the way I used to, and Aaron and I share a frustration in not being able to race up to our level of fitness because of the injuries we carry, but overall I feel like I finally got tossed a bone.

I was able to enjoy the post-race festivities this year because I brought my own pizza.  After a hard race I need ‘real’ food — not little finger nibbles — or I get nauseated.  I felt so good after eating my two pieces of Vace pizza that I was able to drink Mario’s delicious pear vodka smoothie.  Mario and WH Tom did a fantastic job manning the smoothie booth.  And it was great to not feel like I was going to spew and catch up with people — Justine, Heather, Keith, Robin, and even my old XC teammate from Amherst College Annie who had flown up from Miami for JLD’s fiance Liana’s bacherlorette party.  I keep in touch with a couple people from the Amherst XC team, but I hadn’t seen Annie in over a decade.  Annie was very chill and easy going back in college.  I was not.  Some day I’ll regale you guys with all my stories from college.  I only ran for one fall season, but I packed in more drama than all the other runners combined, with big highs (All-American) and big lows (I got suspended for a month and couldn’t even practice with the team) and constantly sparred with the coach I detested for so many reasons (telling girls they were fat and shouldn’t eat dessert, making me run when I was injured, refusing to give me back my All-American diploma that he’d taken to ‘get framed’….).  He’s since been replaced with a new head women’s coach, a woman.  Thank god.  Even with my one-month suspension in Sept/Oct, I finished 19th at Nationals in early November, barely trained (I dropped a full minute off my 5k between Regionals and Nationals to run 17:44).  Who knows what I might have churned out if I’d had a coach I didn’t loathe.

I promise this will be my last WHM, at least for the near future.  I don’t want to drain the race of its excitement by letting it become all too predictable.  Pass the torch, as they say.  But it isn’t easy to step away.  Aaron thought he was going to escape it this year and then I snuck in at the very end.  Next summer he’ll know to handcuff me until September 5th.