When we ran the donut run around this time last year, some of you recall the piggy paraphernalia I brought back from Minnesota — I hope Neal is still enjoying his boar juice bucket.  I was reminded of wussies again during last week’s pig visit to USDA in Iowa.  Des Moines had the best airport gift shop I’ve ever been to:

A t-shirt that read ‘In case of emergency please feed me bacon’ immediately invoked the spirit of Bobby Gill.

A t-shirt with the words ‘I like PIG butts and I cannot lie’ recalled Neal Gorman, when inebriated at Doug & Kerry’s wedding.

And another shirt with ‘You had me at “BACON”‘ — again, Bobby Gill.

As I arrived in Iowa, there were two major news stories about pigs hitting the newsstands.  The ‘bacon scare’ story concerned the effect of the drought on the lowered production of corn and pig feed this summer and the prospects for pork product storages and higher prices this year.   The second story was more disturbing: a 60-year old pig farmer had just been discovered devoured by his hogs.  The pig experts in Iowa confirmed that hogs can weigh upwards of 500 pounds and are aggressive, inquisitive, voraciously hungry animals.  While it was unlikely that the hogs would attack unprovoked, if the man fell or had a heart attack, the enormous hogs could certainly have taken advantage of him in a prone state.  In a grisly story from 2007 a pig farmer serial killer from Canada murdered at least 25 prostitutes and female drug addicts and fed their remains to his pigs.

When Amy from the USDA’s Agricultural Research Service (ARS) asked me if I had any specific requests for my visit to their center in Ames, Iowa, I asked if I could tour a pig farm.  The production process for swine in the United States is actually quite complex, with multiple production stages that involve different kinds of pens and facilities and transport of pigs, and I wanted to learn more about how the process might affect influenza virus transmission dynamics.    But after discovering the vicious side of the little piggy, I was relieved when Amy informed me that I would have to settle for an indoor Pork Production 101 powerpoint presentation by the pig guru Butch Baker.  I know some day I will bite the dust, but I’d rather it not involve being devoured by 500-pound hogs.

For those of you who still have your semen collection cups and pig insemination tubes from last year’s pig visit to Minneapolis, I can now answer some of your burning questions about pig production:

-Today, more than 90% of sows are bred via artificial insemination.

-Pigs can grow from 3 lbs to 300 lbs in 9 months, making them one of the most efficient animals for production of meat.

-The number of US pig farms has reduced dramatically from over 1 million in the 1960s to less than 50,000 today, as the industry has greatly consolidated and a few major producers now strongly dominate the industry.

-The US swine industry estimates it lost ~$50 BILLION from the 2009 ‘swine flu’ virus, even though not a single US pig was infected with the virus at the time (humans have since introduced the virus into the US pig population).  The biggest hits were exports (countries like China cut off US swine exports, even though no US pigs were infected) and to the drop in domestic pork consumption due to misinformed consumer fears.  Such economic fallout has made the pig producers extremely wary of the media and very secretive about disease information among their swine herds, making my job of studying influenza virus dynamics among US swine populations exponentially more difficult.

-You all know how human influenza vaccines are regularly updated with the most currently circulating strains, as identified through a well-organized global WHO surveillance network (why you have to get your flu shot every year).  To facilitate this process, vaccine manufacturers are not required by FDA to re-license their updated vaccine every year.  In contrast, the USDA regulatory hurdles for updating the influenza vaccine used in swine are substantial, equivalent to licensing a new vaccine, and the swine influenza vaccine has not been updated in recent years despite the continued evolution of the influenza virus in swine and the vaccine’s limited efficacy.  We all find it a bit twisted that the regulatory hurdles for a vaccine for pigs is so much more stringent than for humans.  So instead of using the outdated commercial vaccines, pig farmers are increasingly resorting to unlicensed autogenous vaccines (up to 60% of vaccines now are autogenous), essentially the ‘snake oil’ of the swine vaccine world.

-Iowa is the corn capital of the world.  Since corn is used as pig feed, the bulk of the swine industry is located in Iowa and neighboring Midwest states (hence all the bacon-themed shirts in the Des Moines airport gift shop).  In the 1990s, newer swine production facilities were built in North Carolina and Oklahoma.   However, since it’s cheaper to transport the piglets than the corn required to feed them (piggies eat a lot of corn to grow 300 lbs in 9 months!), many of these piglets are trucked to Iowa and other Midwestern states to be fattened up prior to slaughter.  We’ve been studying how these long-distance trucking practices spread pathogens like influenza around the US and particularly into Iowa and the Midwest. 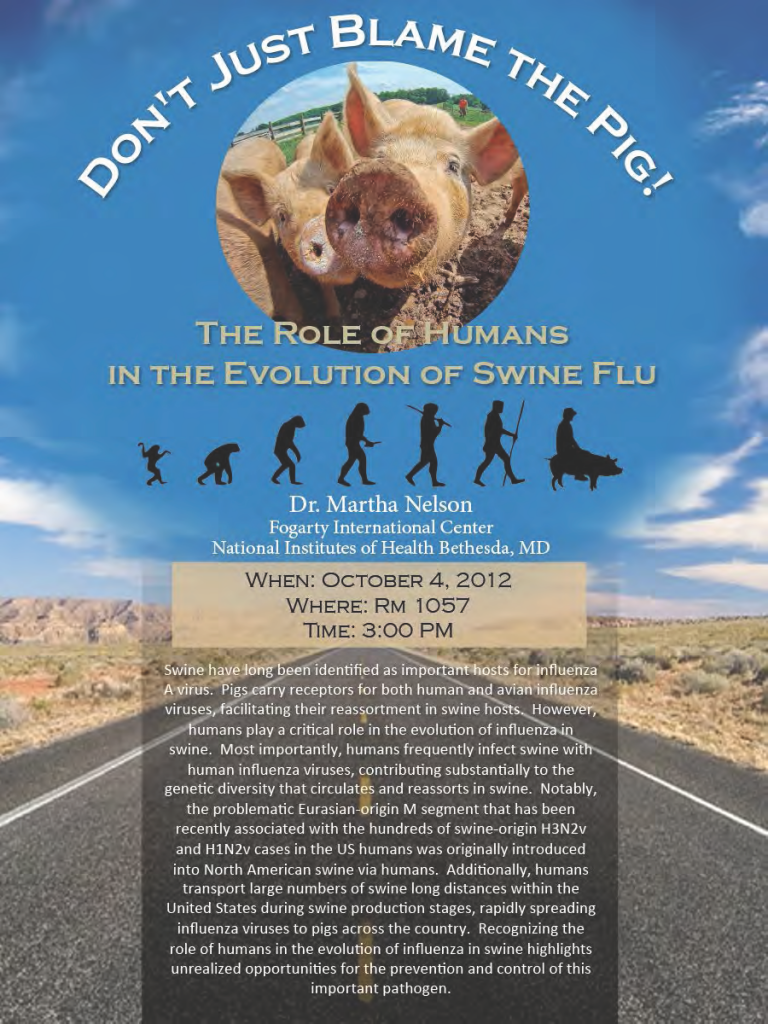